This experiment is one of my favorites.  I’m testing to see if I am still insulin resistant with an Oral Glucose Tolerance Test (OGTT), using two different scenarios.

I started out only wanting to test my insulin resistance, but ended up testing much more. When it comes to medical care and nutrition, because so much ‘science’ has been corrupted by large corporations, we must learn from self-experimentation. 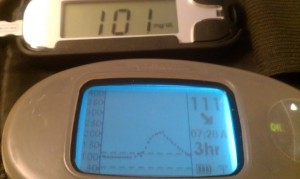 I’ll explain in full below, but the picture above is of my blood sugar reading two hours after my glucose tolerance test ingesting of 75 grams of sugar.  This one reading puts me on the borderline pre-diabetic/non-diabetic, especially given the variances of the meters. Other factors point to me still being a diabetic, more info below. :)

“I successfully manage diabetes with diet and exercise” and that diet is a ‘low carb paleo meal plan“.

I never say that I cured my diabetes … never.  Do you know why?  I am still insulin resistant.

A generous person lent me their Continuous Glucose Monitor (CGM), it provides blood sugar readings every 5 minutes, so I was stoked!

By the way, I do not recommend doing this until you have normal blood sugars, are drug and insulin free AND you have broken the carb, grain, sugar addiction for at least two months… if then. Why?  75 grams of sugar could trigger the addictions … on never knows.

Why test my Insulin Resistance

A friend and I were discussing some of my blood sugar test results, they were so close to ‘normal’, some of them made us think that my insulin resistance was greatly reduced… so much so that one day the person said,

“Eat some sugar!!! C’mon glucose tolerance test! This is the time to do it.!”.

The “Oral Glucose Tolerance” test is a standard medical test for determining if someone has diabetes.  I decided to take the test the next morning.

I had been eating 60-90 grams of carbs for only three out of the last four days in an attempt to re-adapt to glucose.  My plan was to eat this way for two weeks, so I had another 10 days on this plan.

My thought would be that it would be a good ‘baseline’ to see if the results varied much at the end of the experiment.

To interpret those results, here are the generally accepted standards by the medical profession for the 75 grams of sugar OGT test. Joslin is a Diabetes Research Organization and an ADA Minion, according to their guidelines….  (click here for their webpage)

In other words, if you are 200 mg/dl or more, two hours post glucose consumption you  are diabetic. If you are 140-199 then you have impaired glucose tolerance and if you are less than 140 mg/dl, you are normal.

This first test put me squarely in the “Impaired Glucose Tolerance” column.  I was somewhat disappointed but … I was just glad that my blood sugars were no longer in diabetic ranges.

Note: Other sites also add that, if at any time during the test you exceed 200 mg/dl, it’s a sign of impaired glucose tolerance.

Michelle Trevino reminded me the other day of a post by Peter Dobromylskyj.  In the post he is talking about ‘very low carbers’,

“… if you take an oral glucose tolerance test you will fail and be labeled diabetic.”

I urge you to read the entire post but to boil it down, Peter describes what I would call a ‘carbohydrate  intolerance’.  To re-adapt our bodies to consuming carbohydrates and to more accurately reflect our  true ‘glucose tolerance’ on the OGTT, Peter suggests eating 150 grams of carbs for three consecutive days.

For me, I was growing tired of eating high carb meals and I still had another week to go. The thought of only doing it for three more days even at higher levels appealed to me…. so I tried it.

For three days, I consumed 150 grams of carbs. I did this by eating potatoes, rice, bananas, apples and yes… by drinking sugar water.

I will report on all of those days and the affect on my blood sugar but for today … let me just show you the results.

After (3) days of consuming 150g of carbs…. this was my next Oral Glucose Tolerance test results.

(The glucometers are more accurate than the CGMs, especially when the sugars are moving rapidly.)

FYI –  I had a couple of goals.  First, I wanted to be below 200 mg/dl after two hours.   After eating all those carbs for three days… I did not know what to expect.   I really did not want to be in diabetic ranges.

Second, I wanted to be below 140 mg .  That would not only mean that my blood sugars were not in diabetic ranges … but they were in ‘normal ranges’.

Below are the pictures in sequence… it really was exciting to see my blood sugar levels drop.  Would I reach my goals? 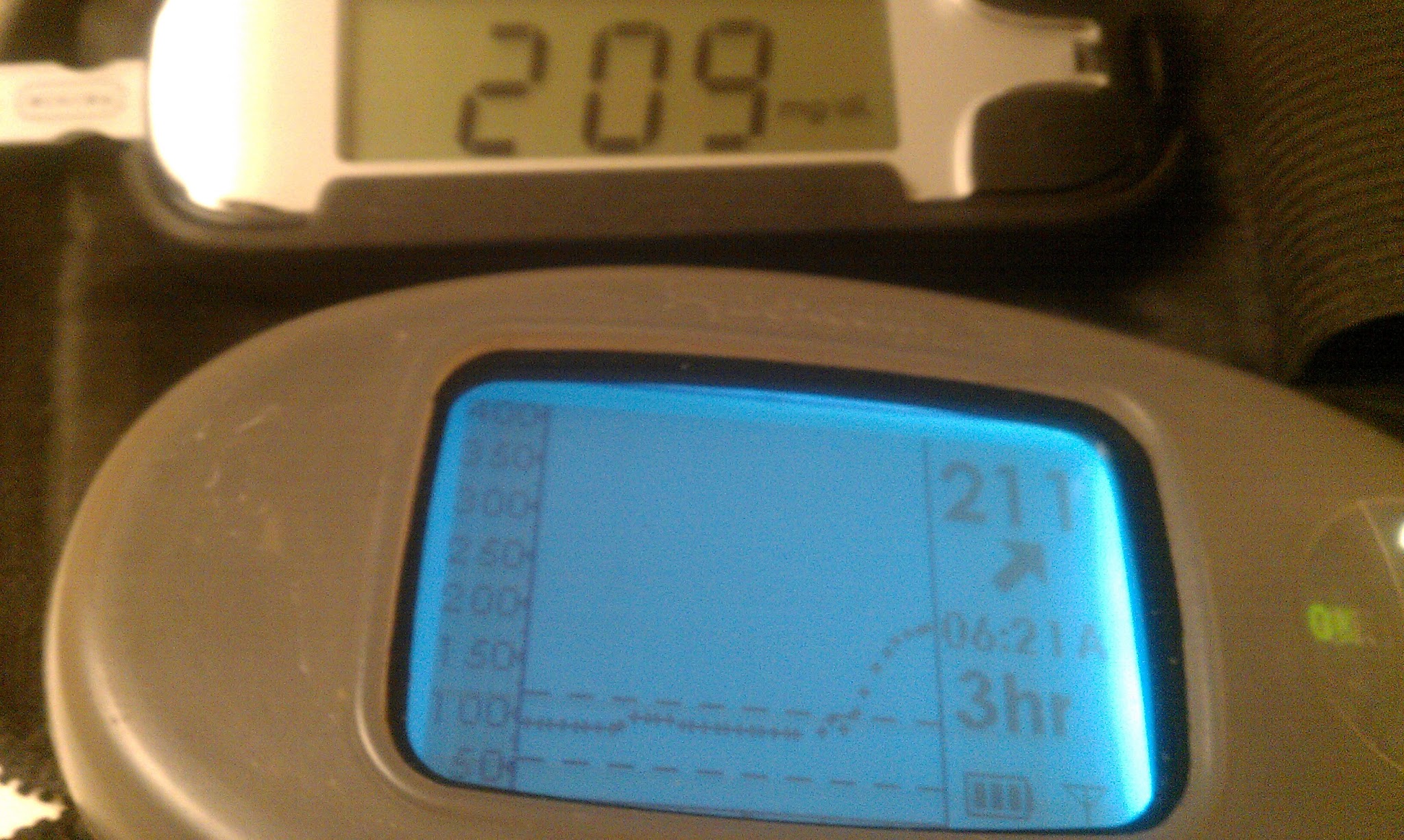 This was the half way point home, one hour into the test.   At this point I was VERY worried.  The arrow is still pointing up… which meant my blood sugars were moving higher.   An hour ‘in’ and I had no idea how it would turn out. 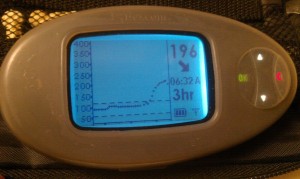 The first good news!   …. the down arrow points to … DOWNWARD MOVEMENT!!! which means lowering blood sugars!! 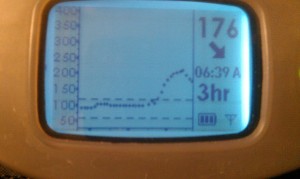 176 mg/dl with 40 minutes left.  This was VERY encouraging because in the past, the ‘real’ movement was in the last 30 minutes as my pancreas’s insulin production ‘kicked in’ in earnest. 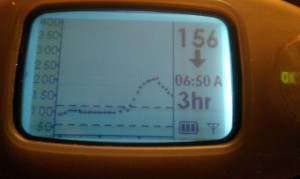 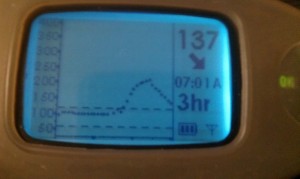 The  picture above is important.

At sub 200 mg/dl,  I am no longer in diabetic ranges but also at sub 140 mg/dl, technically I am no longer considered to have “Impaired Glucose Tolerance”… in other words, I am normal. :)

At this point, I had ‘pricked’ my finger more times in one day that I would normally do in MONTHS.

Check out that cool chart!!! … it rose fast and dropped fast, like it should!

Also, look at that steady rate of decline too … LIKE A MACHINE!!! :) 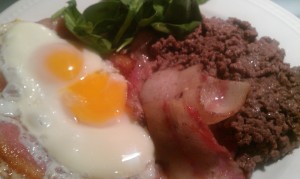 …this picture was my body’s reward. :)

Not ONLY is this a test of my glucose tolerance but it’s also a test of Peter’s advice.  Here are the results of the 2nd OGTT test with the improvements over the initial test. In other words, Peter was right. :)

At least by one medical industry measure I am no longer diabetic and in fact I am borderline ‘normal’.  I would prefer to be 83 mg/dl after two hours.  Obviously, with a reading over 200 mg/dl I still suffer from insulin resistance.

I am truly glad this is over.  I truly do want to return to my ‘very low carb, strict paleo’ meal plan.

As I type this it’s been almost 12 hours since I consumed the ‘sugar water’.  My brunch was bacon, eggs and beef (with a few spinach leaves) and I do not have any cravings for carbs or sugars….

I stepped into the sugary abyss … and have walked out intact.

I will say this, my warnings not to try this are sincere.  I often tell diabetics who are addicted to carbs, “You never know how many more ‘cheats’ you have before you cause permanent damage.”     I thought those thoughts about myself for the first time in a long time.

I do apologize for abusing you for this experiment.  I am finished for now….. no more 150 gram carb days, no more sugar water.

Thanks for holding up so well.

Here are messages  left for on friend’s Facebook chat window ‘live’ at the time of the OGTT. 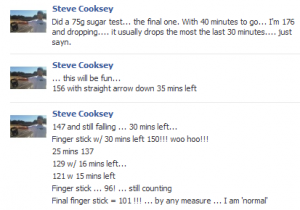