January 1999 I began to feel flu like sick and lost 70 pounds in 10 days.  While the weight loss was 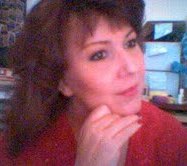 great, or so I thought, I still decided to go see my doctor.  I  found out that like millions of people around the world, I had turned into Type 2 Diabetic.

And it wasn’t good. I was in full fledged Ketoacidosis , my body systems were shutting down, and I was literally dieing.  Here I was eating 3 meals a day, but my cell receptors were closed shut and my body was in starvation mode, and that is why I was burning fat so fast.  It made my kidneys bleed, my retna’s bleed, and I almost had kidney failure, and more.  Thanks to God and an excellent team of Doctors, plus a couple of State Licensed Dietitians, they pulled me out of it. But I am still dealing with damaged health issues long term.

When I first became diabetic, I had no one who told me or taught me anything. I searched and searched finding all I could on the web.  Like many, I found the American Diabetes Association and thought they knew what they were talking about. So I followed them. Did I loose weight? NO.  Did I take medications for my Diabetes? YES.  I continued to eat like I always did, but took medications.

Then I met Brian (Keith) and Steve.  In the beginning, Steve and I didn’t agree, UNTIL I LISTENED TO HIM.  Which made me take a closer look at what Brian and Steve were saying.  So quietly, I searched and researched their information and then began eating Primal.  Immediately you see your blood sugars return to normal!!  I was on a lot of medications, but now I have gotten rid of 3 Diabetes medications so far, and am weaning down on Insulin. I am still in the process of loosing weight, but this time HEALTHFULLY. And I am still in the process of weaning myself off medications!!

I am Native American. And back in the old days, our people ate Meats and Fish, and natural things, like water cress salads, pine nuts, veggies, fruits & berries, and things like that. There wasn’t all that processed foods.  So now following this Primal Meal Plan, I am back to basics and back to eating for my “roots”.   I just want to say how happy I am that I found Brian and Steve and the Primal Blueprint way of eating and back to basics!!  You want to live? DON’T FOLLOW THE ADA!!

———
Steve Note :  Thank you Sandra for sharing your story…and for all that you do.

When Sandra and I first met online, I was in the middle of defending “low carb paleo” in one of the ADA Minion Facebook Groups. I do not remember exactly what was said in the groups … but I’m sure I was rude. If you’ve never tried to help Diabetics in an ADA Minion Group… you have NO IDEA what I’m talking about… it’s tough “fighting” with the “grain heads” and “sugar cubes” as I like to call them.

Over time Sandra and I became friends …she is a real “sweetheart”. I learned that Sandra had founded a Yahoo Group for Type 2 Diabetics. She has devoted much time and energy in helping those with Diabetes. THANK YOU SANDRA!

And… to show she is achieving true success in her war with Diabetes…here is her Blood Glucose reading from August 30th…CONGRATS! 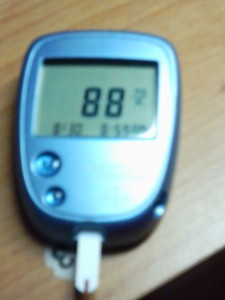 4 thoughts on “Sandy Abernathy’s “Back to Basics” Story”