Skip to content
Home » Personal » Labels of Drugs I Took

Back in 2010, I decided to clean out my ‘medicine cabinet’. This post will show just the pictures of the drug labels I found, nearly two years after I stopped taking drugs.

Note: I was taking many more drugs than you will see in this post.  This is only the drugs that had leftover pill bottles (and the labels) from two years before.  Many of the drugs I was taking were over-the-counter and are not listed.

Prior to Diabetes Diagnosis

Prior to a diabetes diagnosis and prior to following a ‘low carb paleo’ meal plan, like most people I was frequently sick in the winter.

I was on at least 13 drugs within a 18 month time span. I had TAKEN many more drugs ….   these are just the bottles that were left unfinished in my cabinet.  I was also taking Tussenex and Symbicort and many many other drugs, not including the over the counter drugs I’d tried…. all in vain.

I often talk about all the drugs I was taking before I went Low Carb Paleo. JUST  for my diabetes I was taking four insulin shots and four drugs per day.  That was AFTER leaving the hospital with the best medical care our MEDICAL INDUSTRY had to offer.

A little over a month later, I was taking NO drugs of any kind.

I have not seen a doctor for illness since 2009.

Note: I did something stupid in 2013, a bicycle accident sent me to the Emergency Room, I assume I did see a doctor there, and did take one prescription for pain due to a dislocated shoulder.  That’s been my only medical industry professional contact since 2009. :)

DO you really question why the American Diabetes Association, Big Pharma and the Medical Industry do NOT promote a low carb paleo diet?

Low Carb Paleo benefits diabetics, it does not benefit the medical industry.

I know there is SO MUCH “bull” on the internet, it’s difficult to know what to believe. So to provide further evidence of the sad shape my health was in (prior to low carb paleo)  I present to you, my drug label pictures…. enjoy! :)

I need to figure up all the money these drugs costs, some of these were not covered by insurance. I want to curse when I think of not only the money I spent but the discomfort and agony I endured. 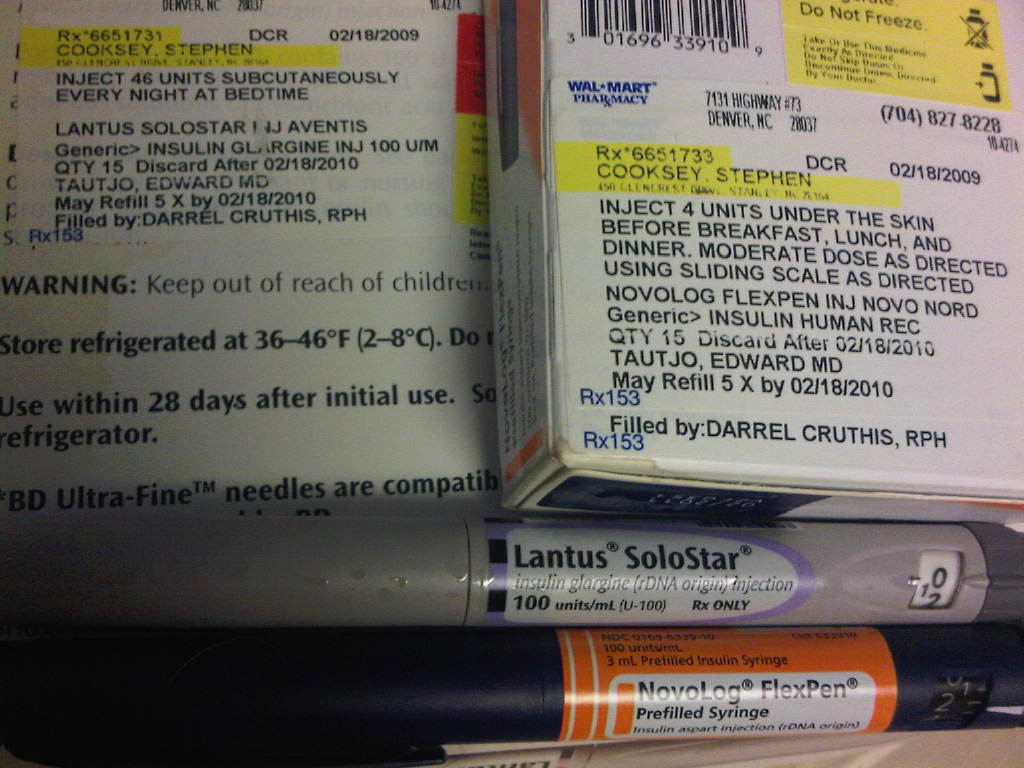 People, if you have to take Insulin to maintain proper blood sugar control, PLEASE DO!!!

Insulin is the drug/hormone that I HATED to take the most.  Main reason? Because “I had to“.  At diabetes diagnosis, popping pills for me at this point in my life was not a problem, I was ‘trained’ to pop pills.

Having to test my blood sugars and then ‘dialing up’ the proper insulin dosage and injecting insulin … was not preferable.  However, I did it.  I knew I needed truly normal blood sugars for optimal health, so I injected insulin.

I was ‘chained’ to drugs and insulin for survival … or so I thought.

Since I have been on a low carb paleo meal plan and lifestyle… I’ve been diabetes drug and insulin free!!

Ailments Before and After

12 thoughts on “Labels of Drugs I Took”