According to a recent study and the most recent information I could find, direct cost of diabetes in the US, in 2012 was $176 billion. Indirect costs were another $69 billion for a whopping grand total of $245 billion.  A 40% increase from five years earlier. 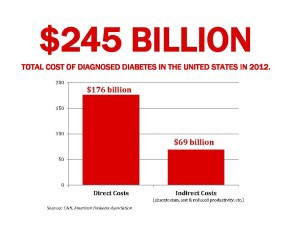 This post will focus on the financial cost of diabetes. However, the pain and suffering ‘costs’ of 100’s of millions of diabetics is incalculable.  The loss of life and loss of ‘living’ too is immeasurable and yet far exceeds the financial  costs.

Cost of Diabetes Per Person

According to a study, “High lifetime costs for Type 2 Diabetes”  a person diagnosed with Type 2 diabetes will spend $85,000 over their lifetime on diabetes related medical expenses.

Just so you know, the $85,000 lifetime costs of diabetes per person is revenue for Big Pharma and The Medical Industry.

With 28 million existing diabetics in the United States today,  they are worth $2.3 TRILLION in revenue to Big Pharma and The Medical Industry

The numbers above are based on current diabetics, estimated at 9% of the US population.  Many are predicting a dramatic rise in diabetes, as much as 30% of the US becoming diabetic by 2050.

With the percentage of the US Population expected to more than triple in the next 35 years, not to mention medical spending inflation, population growth, the potential revenues boggle the mind.   The medical industry is a growth industry.

Diabetes is a ‘cash cow’ business.  Once a drug company obtains a customer at diagnosis they will likely be a customer, for the rest of their life. Vast majority of diabetics’ health worsens and require more and more drugs. Almost none, on a percentage basis do what I have done, wean off all drugs and insulin.

Big Food, Big Pharma and The Medical Industry  contribute  MILLIONS of dollars to groups such as the American Diabetes Association, the Academy of Nutrition and Dietitians, American Cancer Society as well as the American Heart Association.

Why? Each company wants to be a major player for the $245 billion in the ‘cost of diabetes’.

Big Pharma alone contributed $31 million to the American Diabetes Association  in 2012, click the link to read the post. All of the groups above promote a high carb, grain based meal plan.  Big Pharma companies pay these amounts because they are jockeying to be the preferred provider for diabetic drugs and supplies.

They all want to be the main supplier of the $2.3 trillion in revenues… I mean ‘cost of diabetes’.

Here is a link to an online database (it’s no longer being updates) where you can look up your doctor and see if they have received payments from Big Pharma.

Why is it important to know if your doctor has received money from Big Pharma?

Studies show that financial connections do affect treatment options,  I posted about it here.  You and I do not need a study to ‘know’ this, it’s common sense.

If a Big Drug company is paying 1,000’s or in some cases 100’s of thousands of dollars, they know it will influence the treatment prescribed.  Big Pharma is ‘banking on it’, literally.

Why would Big Pharma pay out hundreds of millions of dollars to doctors?

1 – Their revenues based on the cost of diabetes depend on more customers (patients).

2 – Remember the ‘cash cow’ discussion above?   The doctor prescribes the treatment and initially the blood sugar devices and supplies.  As long as the doctor is ‘taken care of’, the patient will likely be on the drugs, supplies and devices for the rest of the patient’s life.

Not only is the patient a ‘cash cow’ … but so is the doctor.

Or should I title this post, “Revenue of Diabetes”.

With $2.3 trillion in revenue at stake, Big Pharma can afford to throw around millions of dollars to the American Diabetes Association, American Heart Association, etc. and to doctors.

It is essentially bribe money or kickbacks. Big Pharma can afford it based on the economics related to the cost of diabetes.

Paying the ADA millions of dollars so the ADA will continue to promote a high carb drug inducing meal plan.

Paying the doctors millions of dollars so they will continue to promote the same meal plan but also prescribe their drugs, medical devices and supplies.

Which do you think Big Food, Big Pharma and the Medical Industry prefer?

Almost every nation is struggling with the cost of diabetes. If for none other than financial reasons, every diabetic needs to eat like me.
Never forget, the human cost of diabetes.  Millions suffer while a relative few profit.