A recent study was published claiming the diet of our ancestors was ‘full of carbohydrates’ and helped fuel our brain’s size increases.  Because of this some are saying everyone should eat tubers.

Yes, diabetes management is all about the blood sugars,  diabetes complications stop worsening as blood sugars reach normal levels. When normal blood sugars are reached, the body can begin to heal itself. 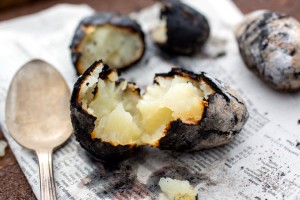 “diabetes management from a paleo perspective”

The mission statement means exactly what it says.

I look at managing diabetes from a paleolithic perspective.   I am not looking to ‘recreate’ paleolithic conditions.  I can’t eat, drink, and breathe paleolithic era animals, water, and air.  Even eating animals that existed then would not be exactly the same thanks to toxins and pollutants in the environment. For example, mercury levels in fish. Not to mention the genetic changes from breeding techniques and less natural genetic modifications.

However, we should try to adapt our lives (the way we eat, play and live) as close as we can… assuming it helps us to manage diabetes and our health in general successfully.

Example: I have no doubt that paleolithic humans ate tubers.  I also know, after repeated experiments, high carb foods such as tubers spike my blood sugars, which is strike one when it comes to diabetes management. Continuing to eat high carb foods also gradually raises my fasting blood sugars as well… that’s strike two and three when it comes to diabetes management.

So yes, I look to our past to see if there are ways I can live closer to how we were designed to live, but I test everything against my blood sugar. I ask the question, ‘is this helping or harming my ability to manage diabetes?”

Normal blood sugar levels are the key to proper diabetes management, not living according to some dogmatic fantasy reconstruction. Believe me, if I thought eating tubers and other high carb ‘real foods’ would benefit diabetes management, I’d be eating them and blogging about it.

In that context, I do not give a damn if paleolithic humans ate tubers or not.  I believe they did but it matters not in regards to how I eat.  As noted I measure everything against my blood sugar levels. For diabetics, diabetes management is the KEY!

Second, I have written MANY posts about the harmful advice that the Medical Industry provides to diabetics.  The list includes doctors, nutritionists, dietitians and diabetes educators.

It is difficult to rank the bad advice but near the top of the list is the lie.

We’ve all heard it …right? It scares people into believing they MUST eat carbs to live. If my personal example has done nothing else, it has shown that statement to be utter nonsense! I eat 10-15 grams of carbohydrates on average, per day for the last 6.5 years.

Here is a post on my diabetic food journals

By any measure: blood sugar control, health, fitness… I THRIVE!

“Evolving Brains A Paleo Diet Full of Carbs” contains some truth and much conjecture.

Conjecture: an opinion or conclusion formed on the basis of incomplete information.

In my view, at best it’s a flawed study based on bias.  At it’s worst this article is more vegan / vegetarian propaganda.

Scientists have long recognized that the diets of our ancestors went through a profound shift with the addition of meat.

Good.  We have a solid foundation of agreement.

But in the September issue of The Quarterly Review of Biology, researchers argue that another item added to the menu was just as important: carbohydrates, bane of today’s paleo diet enthusiasts.

Isn’t it odd that a ‘diet’ was mentioned here?  Perhaps so, perhaps not.

However calling carbohydrates the ‘bane of today’s paleo diet enthusiasts‘ says much.

Roughly seven million years ago, our ancestors split off from the apes. As far as scientists can tell, those so-called hominins ate a diet that included a lot of raw, fiber-rich plants.

The above statement is true based on the fossil record.  For several millions of years, our ancestors’ brain sizes stayed small. For those same MILLIONS of years tubers existed, as did roots, fruits, nuts, berries.

Fact: For millions of years our ancestor’s brain size remained chimp-like in size despite the existence and availability of fruits, nuts, berries and tubers.

If carbohydrates fueled our brain increases …  why did brain size not increase for the millions of years we were ONLY eating plants?

After several million years, hominins started eating meat. The oldest clues to this shift are 3.3-million-year-old stone tools and 3.4-million-year-old mammal bones scarred with cut marks. The evidence suggests that hominins began by scavenging meat and marrow from dead animals.

The fossil record supports the above statement. A solid basis of agreement.

At some point hominins began to cook meat, but exactly when they invented fire is a question that inspires a lot of debate. Humans were definitely making fires by 300,000 years ago, but some researchers claim to have found campfires dating back as far as 1.8 million years.

More agreement, according to the fossil record.

Just to highlight a point.  Food from animals provided increased energy to help our ancestors grow and thrive … that includes the BRAIN.  :)

But Mark G. Thomas, an evolutionary geneticist at University College London, and his colleagues argue that there was another important food sizzling on the ancient hearth: tubers and other starchy plants.

I agree, it’s ridiculous to claim that man did NOT eat roots, tubers, nuts, berries and fruits.

I do a fair amount of foraging and when I am ‘in the field’ I find it extremely difficult to pass on any edible food. My guess is that early man would think similarly.

However, as noted earlier our ancestor’s brains sat idle for MILLIONS of years while I am sure they ate plenty of ‘carb rich’ nuts, berries, fruits, roots and tubers.  Not all roots & tubers must be cooked to be eaten.

In fact, the scientists propose, by incorporating cooked starches into their diet, our ancestors were able to fuel the evolution of our oversize brains.

The above statement is where I begin to strongly disagree.   And it shows their bias in my opinion.

For millions of years our ancestors brains ‘sat idle’, eating almost entirely carbohydrates … to make the above claim is wrong.

Our bodies convert starch into glucose, the body’s fuel.

The statement above shows either ignorance or bias… or both.

Our bodies do convert starch to glucose, but it’s NOT the body’s ONLY fuel.  In fact, our bodies do not require dietary carbohydrate from plants to survive NOR thrive.

Glucose is ‘a’ fuel for the body but so is ketones.   Our bodies are designed to create all the glucose we need through gluconeogenesis.  I have eaten on average 10-15 grams of total carbohydrates daily, for years.

No doubt many ancestors ate tubers.

Our brains remained chimp-like in size for MILLIONS of years, while our ancestors ONLY ate plant foods.

It is not until our ancestors began eating meat that our brains began to grow, giving us the ability to harness more tools including fire.  As time progressed we learned to cook meats and tubers as well.

The fossil record shows a drastic acceleration in the size of hominin brains starting roughly 800,000 years ago. Today our outsize brains use up as much as a quarter of the calories we burn.

I’ll end the post with my agreement with the above quote.   Just remember that for several million years our ancestors’ brains remained small while eating a diet almost entirely of carbohydrates.

It’s only after we begin eating meats that our brain size and thinking capacity began to grow.

I find the biased conclusions of many to be very frustrating… such as the two below.

This post was a critique of the article reporting a study. I decided to read the actual study.  It was worse than the article in many ways.

We provide evidence that cooked starch, a source of preformed glucose, greatly increased energy availability to human tissues with high glucose demands, such as the brain, red blood cells, and the developing fetus.

If you consume starch, it will spike blood glucose, but … it’s not needed.

We do NOT need to eat starch to meet, ‘high glucose demands”.  It’s a falsehood repeated by those who believe in the conventional wisdom.

… to maintain normal brain function in individuals adapted to an essentially carbohydrate-free diet there remains an absolute requirement for 30–50 g.

A daily carbohydrate intake of about 50–100 g is considered essential to prevent ketosis in adults, and is consistent with a more realistic recommendation for the practical minimal requirement of 150 g/day of glycemic carbohydrate intake beyond the ages of 3 to 4 years

The above quotes came directly from the study. Yes, I actually read the study. :)

So WRONG!  The entire article and the actual study is based on a false premise.

The premise that HUMANS require dietary carbohydrates for survival is a lie.

The premise that humans REQUIRE 50, 100, 150g of dietary carbohydrates is a lie.

We do not need dietary carbohydrates to THRIVE. I and many others are living proof.  I’ve consumed on average,  10 – 15 grams of total carbs daily… for over six YEARS.

The human body is an amazing design. The above quotes imply that we have such high demands for glucose that we must eat high carb foods (like tubers) for brain function and other bodily functions.

The same harmful and wrong bovine feces the medical industry spews today.  Our bodies produce all the glucose we need!  Look up gluconeogenesis, we do not require ‘high levels’ of carbohydrates to meet the ‘high demands for glucose’.  Ignorance and bias is rampant in science.

Our bodies and brains do require energy and fatty meats give us much more energy, pound for pound.

Ultimately it makes absolutely no difference to me how our ancestor’s ate.  I have eaten high, moderate and low carbohydrate diets in numerous experiments;  I am thriving on the meal plan that works best for me, a very low-carb, high fat,  paleo style meal plan.

I will continue experimenting and searching for a ‘better way’, but the first hurdle is maintaining normal blood sugars. :)