The medical industry including doctors, nutritionists and diabetes educators have been misleading us for decades. Every cell in our body contains cholesterol. It is so important, our liver will produce cholesterol if we do not eat enough. 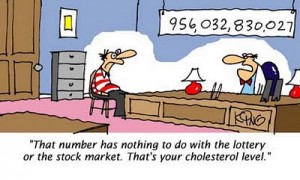 The Medical Industry hands out statins like candy, especially to diabetics thanks to the American Diabetes Association’s “Diabetes Care”. Statins hinder our bodies from producing cholesterol and that’s a bad thing.  By the way, statins are linked to increased risk of many diseases, including diabetes.

I personally don’t care what my cholesterol numbers are.  The NMR test can be found here, “Direct Labs“.

** For some their cholesterol numbers increase initially, while actively losing weight.  I have heard of some, whose cholesterol numbers did not improve, but I can not attest to their strict adherence to the meal plan, nor the ratio of small dense vs large buoyant LDL, they did not have a VAP or NMR test. If you don’t know what LDL is… relax, it’s below. :)

THE most common questions asked when introducing someone to ‘primal living’ is usually something like this….

“won’t all that saturated fat clog your arteries?”

“I have high cholesterol in my family, is this diet good for cholesterol?” 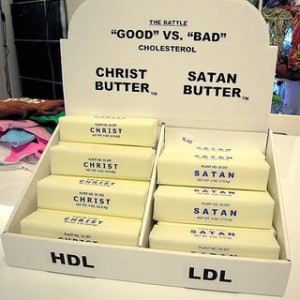 Butter is a health food

This post will show my favorite links, articles and websites regarding cholesterol and saturated fats… with brief comments. :)

The post. “The Definitive Guide to Cholesterol“, was written in January 2008— over 3 yrs ago ( still most doctors… MOST cardiologists don’t even know this today).

Cholesterol is a waxy, charming lipid gracing every cell’s membrane and our blood plasma. Its jobs, which are many, include insulating neurons, building and maintaining cellular walls, metabolizing fat soluble vitamins, producing bile, and kick-starting the body’s synthesis of many hormones, including the sex hormones. Cool stuff actually.

From this short passage we get a glimpse into the importance of cholesterol…. it has many uses, many tasks and purposes.

HDL – High Density Lipoproteins – job of transferring cholesterol from the body’s tissues back to the liver. HDL is the one to naturally help get rid of excess cholesterol when the body’s done with it, hence his universal popularity. “Nature’s garbage truck”

LDL – Low Density Lipoproteins – job of transporting cholesterol after production from the liver to the body’s tissues. Remember, this is an important job! That cholesterol has a honey-do list a mile long.

The latest research into LDL shows that there are actually sub-categories of this cholesterol transporter and that some are more dangerous than others. The larger, more billowy LDL particles are now thought to have little or no significant role in heart disease. On the other hand, the smaller, dense LDL particles are the ones believed to be most involved in the process of inflammation that begins the atherosclerosis cascade. And wouldn’t you know it, but it’s a diet high in simple carbs that most readily promotes the formation of these small LDL particles!

The typical ‘cholesterol test’ does not contain particle size information, nor the particle number information  and only tells part of the story.  Ask your doctor about it and tell me the answer you get.  Better yet, ask them about a cholesterol particle size test, if they don’t know or tell you it’s not important… you are seeing the wrong doctor, in my opinion.

Triglycerides – are essentially the form that fat takes as it travels to the body’s tissues through the bloodstream. The relationship between triglycerides and cholesterol is more of an association. A high triglyceride level, which is unequivocally fueled by a high carb diet, is very often a marker for other problems in the body, particularly insulin resistance (and accompanying risk of diabetes) as well as inflammation (with its risk of heart disease). High levels are often seen with low HDL cholesterol. Once again, the high carb diet wreaks havoc.

As Mark notes in this excellent post on cholesterol, inflammation including the inflammation from high levels of carbohydrates is the main problem affecting higher numbers of the dangerous LDL cholesterol.

So is Mark correct about triglycerides? … read and heed these quotes

Overindulgence in carbohydrates from the goodies triggered triglyceride (actually VLDL) formation in the liver, released into the blood.

Goodies in this example are cookies, cakes, candy etc…

Increased triglycerides and VLDL interacted with HDL particles, causing “remodeling” of HDL particles to the less desirable, less protective small particles, which do not persist as long in the blood, resulting in a reduction of HDL.

The critical factor is carbohydrate intake. This triggered a domino effect that is often misintepreted as excessive fat intake or a genetic predisposition. It is nothing of the kind.

In the quotes above,  you have a leading cardiologist and diabetic agreeing with Mark Sisson…. it’s the high carbohydrate consumption that is causing the problems not the dietary cholesterol.

Cholesterol is Abundant in Cell Membranes

From  ~ Chris Masterjohn, PhD candidate in Nutritional Sciences from the Univ. of Connecticut .

Cholesterol is found in every cell of your body. It is especially abundant in the membranes of these cells, where it helps maintain the integrity of these membranes, and plays a role in facilitating cell signaling– meaning the ability of your cells to communicate with each other so you function as a human, rather than a pile of cells.

Cholesterol Maintains the Integrity of the Cell Membrane

Cholesterol has many functions and is a needed nutrient.

Back to MarksDailyApple.com and this post “The Definitive Guide to Cholesterol“,

Given all the work cholesterol has to do, the liver is careful to ensure the body always has enough, producing some 1000-1400 milligrams of it each day. In comparison, the 300 milligram recommended limit for dietary cholesterol (your tax dollars at work in the USDA) is a drop in the bucket.

And get this: our livers come with feedback mechanisms (at no additional cost) that regulate cholesterol production in response to our dietary intake. When we eat more, it makes less, and vice-versa. Imagine that!

Did you catch that?

US Dept of Agriculture set our cholesterol intake at 300 mg per day,  meanwhile we produce 1,000 – 1,400 mg per day… if our meal plan comes up short. Cholesterol is so important to our bodies, we MAKE IT if we do not eat enough.

In summary, we can see from the information above that we need cholesterol.

So, given the important role that cholesterol plays in many many diverse body functions… why would we want to reduce DIETARY CHOLESTEROL?

Quotes from the article “The Definitive Guide to Cholesterol” continue.

Big Pharma To The Rescue!

Early drugs that “battled” high cholesterol prevented its absorption in the digestive tract. The side effects on the digestive system were unpleasant enough and the results modest enough that the drugs never garnered much support from either side of the prescription pad. Enter statins. Statins inhibited the natural production of cholesterol. Side effects were not as immediately noticeable or uncomfortable, and the results were quite good (at least at lowering cholesterol). (The recently beleaguered Vytorin and Zetia combined statin actions with a substance that reduces absorption of dietary cholesterol, preventing your body from trying to compensate for the lower natural cholesterol production.)

What Are the Problems With This (“Lipid”) Model?

First off, let’s go back to the evolutionary question. As a naturally self-regulating system, the body will react if it doesn’t have enough cholesterol (yes, the body’s definition of enough and not Merck’s). If there’s not enough cholesterol, the alarm goes off, strobe lights flash and the body goes into crisis mode. Corticoid hormones coordinate a redistribution of cholesterol, a triage of sorts in which cholesterol is rationed among the many areas of the body that need it. Nonetheless, the body is now working under hardship conditions.

It all boils down to inflammation. Inflammation is the number one factor in heart disease. This is an accepted fact now, but it still gets little attention and no real prevention or treatment. Think about it: you have your cholesterol levels checked every five years or more if your profile is “problematic.” When do you have biomarkers for inflammation checked? Unless you’ve had a heart attack or been diagnosed with a serious medical condition, probably never.

Inflammation. What is it caused by? Not fat, but carbohydrates. Yes, sugars and processed carbs are highest on the list of perpetrators here, but grains and starches as a whole contribute to the problem. LDL rises directly not with the amount of saturated fat you eat but with rising levels of inflammation caused by carbs and trans fats.

Oxidation. Furthermore, nearly every study suggests that LDL is only a true threat when it’s oxidized. What oxidizes it? Free radicals. We’re talking trans fats primarily, that beast of an additive found in countless food products (as opposed to foods). What counteracts free radicals (because we all naturally have some in us)? Anti-oxidants: veggies and fruits, of course, as well as nuts, olive oil, etc. Consider also a broad-based multi-antioxidant supplement containing those nutrients shown to decrease oxidation.

Cholesterol profile can be impacted by other conditions such as hypothyroidism, untreated diabetes or pre-diabetes, pregnancy (surprise!), lactation, stress, liver conditions, heart disease (symptom, not cause of), etc.

The problem with conventional measurement of cholesterol is that it ignores the particle size issue: whether particles are large or small. Small LDL are flagrant causes of coronary atherosclerotic plaque. Large LDL is a rather meager cause. Simple cholesterol measurement also ignores the presence of other factors that lead to heart disease, like lipoprotein(a) and vitamin D deficiency.

Conventional total and LDL cholesterol do not distinguish between large and small particles, nor reveal the presence of other hidden patterns. An LDL cholesterol of 150 mg/dl, for instance, may contain 100% large LDL–a relatively good situation that by itself is unlikely to cause heart disease, or it might contain 100% small LDL–a very bad situation that is likely to cause heart disease. Just knowing that LDL is 150 mg/dl tells you almost nothing. In 2008, most people have some mixture of the two, particularly with the proliferation of “healthy whole grains” in the American diet, foods that trigger formation of small LDL.

But when you are provided genuinely effective information on diet, along with correction of nutrient deficiencies, then the “need” and apparent benefits of Lipitor largely dissolve. While there are occasional genetic anomalies that can improve with use of Lipitor and other statins, many, perhaps most, people taking these drugs really would not have to if they were just provided the right information.

To summarize, I’ll quote Chris Kresser of  “The Healthy Skeptic”,

Saturated fat does the opposite: decreases small, dense LDL and triglycerides, and increases HDL.

Cholesterol in the diet has no effect on 70% of the population.  On 30% of the population, it raises large, buoyant LDL (which is not associated with heart disease).  The reduction of small, dense LDL via egg consumption may be due to saturated fat rather than cholesterol, particularly in the non-responders.

This has been proven in not only my own story, but also in countless others. As an added benefit,  saturated fats have essentially -0- affect on blood sugars.

Eating saturated fat is a win/win. :)

You can believe the contents of this post or continue to put your trust in a doctor and medical industry that benefits on your continued adherence to a low fat, high carb, grain based meal plan.