Peter Dobromylyskyj  wrote an article  suggesting the possibility that a VERY high carb, VERY low fat diet might improve insulin resistance. Peter “D” is someone who I respect so I decided to try an experiment.

I am a formerly obese, formerly drug and insulin dependent diabetic.  I weaned off of drugs and insulin, while maintaining truly normal blood sugars on a VERY high fat, Very low carb paleo meal plan. 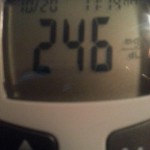 As this picture above shows, some of my results with the very low fat experiment were quite disappointing.  Would my blood sugars improve? Read and see. :)

Regardless of the Low Fat Results

I will continue to eat a very high fat, very low carb diet. Why? Because it provides me with energy and vitality I need to thoroughly enjoy and participate in LIVING! Not coincidentally, it also allows me to obtain and maintain truly normal blood sugars. :)

I believe our bodies require dietary fats, including dietary cholesterol to THRIVE!  I explain why in “Saturated Fats & Cholesterol are Good“.

So I tried it.  In talking to Peter he thought 20 grams of fat or less should be low enough.

Phase 2 – After five days of VERY low-fat, I would ramp up carbohydrates to test my body’s ability to process them.

Food – I ate lean meats and leafy green vegetables the first five days.  Often boiling and then broiling the meats to extract as much fat as possible.  A typical meal, boiled and broiled chicken breast. Yuck! :)

During the three days of Phase 2, I ate white and red potato daily as my main carbohydrate source, in addition to ‘tuna lite’ and chicken breast.

Note: I used fat totals from several online sources, I feel confident the fat grams and probably the protein as well were actually lower due to the boiling and broiling of the meats. How much fat can there be in BONE DRY chicken breasts? :) 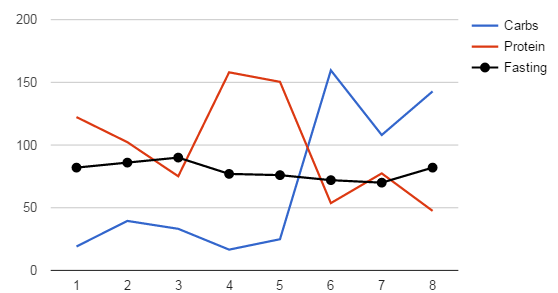 Comment: Looking only at the chart above, you would think this experiment was a success because my fasting numbers remained low (70-90 mg/dl). You might even wonder why I did not continue it longer.  The next section will … tell the tale. :)

Days 1 to 5, every thing was beautiful.  Yes, I seemed to stay hungry but from a blood sugar perspective all went perfectly.

How would five days of VERY low-fat affect my blood sugars under a carb load?

So while my fasting numbers looked very good, the intraday, post meal numbers were absolutely horrible.  After 8 days of VERY low-fat, after 3 days of spending hours at damaging blood sugar levels… I said, “no mas”.

I was often hungry, not a surprise given the low-calorie, low-fat levels.  My energy level was lower on the first two days, this could have been due to the low-fat adaptation but I also had poor sleep the nights before. Generally my energy level did seem lower, but could have been ‘in my mind’.

Not a surprise was my weight loss.  Averaging 901 calories per day, with a low-fat ‘diet’, you would expect weight loss and … I did.

Yesterday, my first full day after the experiment, I went to the gym.

Strength was maintained but I did feel a lower energy level than normal. I had to push myself through the chest routine, and that’s usually not the case.

My blood sugars post meal were at damaging levels and remained so for three to four hours  Just because you test fasting blood sugars does not tell the tale.

Even more importantly, if you think you are not diabetic because of a yearly blood test that shows you happen to be within normal ranges… you need to test your blood sugars post meals as well as fasting for several days.

I’ll leave you with this.

I love the way I eat, play and LIVE!

I saw nothing in this 8 day experiment that changed my mind, I will continue to eat a low-carb, high-fat, moderate protein meal plan. Now please,  pass the bacon! :)

to TotalDiabetesSupply.com. I could not have tested my blood sugars for this low fat experiment were not for them providing me with free testing supplies. By the way, I am not compensated (other than free supplies) .  They in no way influence my decisions or posting other than a ‘thank you’, occasionally.