According to Joslin, the end of the high carb era for diabetics has arrived, it apparently arrived in November 2014 when Joslin and Hamdy first announced it.  I’ve written two previous posts about Joslin and  (Hamdy) who wrote an article stating ‘The End of High Carb Era for Type 2 Diabetes”.

Joslin (and Hamdy) receive Big Pharma ‘contributions’ and both still promote high carb diets to those that need it least… diabetics. Below is a meme I created for context. Remember, Hamdy claimed the End of High Carb… in 2014. 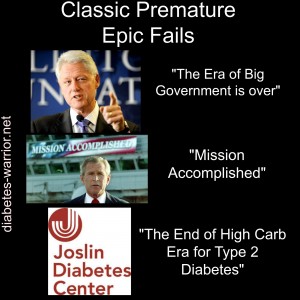 When Hamdy and Joslin stated the ‘end of high carb’ in this paper, they only stated that 40% of calories from carbohydrates or more was wrong. Joslin still promotes a high carb grain based diet itself at 30% and more.

Also, I discovered that the actual paper that started all of this was written and published in the fall edition and published in November of 2014.  So months after Joslin declared the ‘High Carb Era Dead’ they still promote high carb… see below.

Meal Planning in 2017 from Joslin’s Blog

Most people can fit an occasional dessert into their meal plan. “If you know your carb goal is 60 grams per meal,

Does 60 grams of carbs sound like ‘low carb’ to you?  Not to me. This is the same old ADA-style BS.

Know what a cup of rice or potatoes looks like. And focus on getting carbs from healthy sources such as whole grains, starchy vegetables, legumes and dairy.

High carb is not dead.. it’s alive and well at Joslin’s.

I could go on and on with examples, below is one more.

Note: This was after Joslin claimed the era of high carb was over, in 2014.

Another tip is to opt for whole grain brown rice instead of sticky rice. Serving these choices on smaller plates and bowls will tend to make you eat less.

So rice is ok, just use whole grain brown rice… really? Promoting brown rice over ‘sticky rice’ is as ridiculous as promoting whole grain bread over white bread.  Diabetics should not be EATING GRAINS… period!

Rice is a grain … an extremely high carb, high starch grain that spikes blood sugars horribly.  The advice is … ridiculously ignorant.   They go on to add… use smaller plates! Oh my god! Portion control!! ….. so wrong.

Oh… but this is my favorite…

As you eat, remember to eat slowly and stop after every few bites to enjoy the company around you.

To summarize this article, eat brown rice, low-fat meat on small plates and chew slowly.  ARE YOU KIDDING ME?

This was not an ancient article from 1990 … although it could be, it was published in 2015, after the “Era of High Carb” was dead… supposedly.

Dr. Ganda, who also works for Joslin authored this post on EverydayHealth.com, (a conventional wisdom site)  “Have Diabetes. Protect Your Heart“.

” To protect your heart, try aiming for an A1C reading of less than 7 percent”

That is a major #FAIL.  Blood sugar levels that high are toxic to every cell in the body.  It’s a disgrace for anyone to promote such high blood sugar levels.  This man is an idiot or a charlatan… I’m guessing charlatan.

At Joslin, we recommend eating fiber-rich foods, such as fruits, vegetables, and whole grains to help you achieve this goal.

UGH!!! … and ‘low carb experts’ run around claiming ‘High Carb Era is OVER” …

Does eating rice, whole grains, fruits and low fat foods… seem like low carb to you?  Or even moderate carb? … not to me.

Certainly 70% is high carb… no one would deny.

Joslins along with American Diabetes Association and the American Association of Diabetes Educators are causing so much pain and suffering for diabetics by promoting a high carb, grain based meal plan.

That’s why it was a shock to me when some “low carb experts” applauded a paper by a Joslin researcher declaring the End of the High Carb Era for Diabetics. Think about  groups or people who have caused a lot of pain and suffering throughout history … and then think of applauding them for saying they are going to stop causing pain and suffering.

Those who applaud Joslin are misguided… very much so.  And those same people are rewarding deceitful, harmful behavior. We should be keeping the pressure on them to do the right thing… not applaud them.

Meanwhile MILLIONS of diabetics continue to suffer …thanks in large part to Joslin and Hamdy.