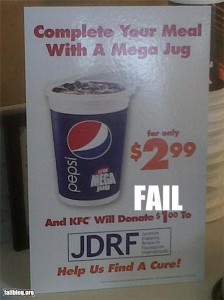 I saw this today and just had to post about it.   How can anyone see this and not become outraged???

Some are so blinded by the ‘Influence Peddlers’, even some diabetics support this ‘bovine feces’…..

How are companies such as PepsiCo and KFC (owned by Yum Brands) allowed to actually advertise their support for a cure for diabetes?  Especially since their products help contribute to the growing obesity epidemic.  Many of their high carb, high sugar foods and drinks lead to insulin resistance which leads to … Diabetes!

… the answer is obvious, if you know where to look.

Neither PepsiCo nor KFC should be allowed to promote diabetes fundraising.

Their products create more diabetics and obesity.  The diabetes community should distance itself from all such companies and not allow them to appear to be ‘diabetes friendly’. Instead the ADA, JDRF embrace these companies… it’s shameful.

The vast majority of the products cause glucose spikes or are highly inflammatory due to the prevalence of hydrogenated oils, sugar, grains and high fructose corn syrup through out their product offerings.

This is an absolute DISGRACE!

To get you to see the INFLUENCE of MONEY!

Because many of you still believe that the advice that you  receive from your doctor, certified diabetes educator (CDE), dietitian or nutritionist … is ‘for your own good’.   It is not.

The advice you receive benefits the medical industry, the pharmaceutical industry and BIG FOOD companies that sell grains and sugar.

… their advice comes from a national organization that is RUN and FINANCED by people who are influenced by MONEY! 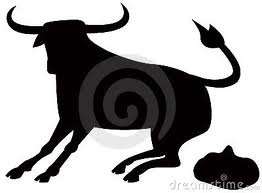 Read this post regarding the National Association of Diabetes Educators
https://www.diabetes-warrior.net/2011/01/16/would-this-shock-you/

Our mission is to prevent and cure diabetes and to improve the lives of all people affected by diabetes.

Yet… they promote a meal plan that creates more diabetics every day AND harms millions of existing diabetics.   Why would they do that??? … here’s 31 million reasons, and this is just the Pharmaceutical Industry.

Say NO to this continued “Bovine Feces” and take a stand… Let your voice be heard!

If we sit idly by and do nothing … the ‘money changers’ will win.