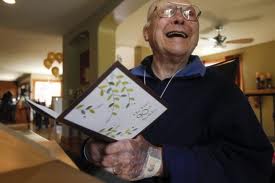 Update: Bob Krause died in 2012 a few months short of his 91st birthday.  He lived a long and full life, successfully managing his diabetes.

“When Bob Krause turned 90 last week, it was by virtue of an unflagging determination and a mentality of precision that kept his body humming after being diagnosed with diabetes as a boy.”

I see, read and hear diabetics complaining on a daily basis about the damaging affects of high blood sugars … and they did not live most of their lives without the latest diabetes tools and gadgetry that we have today, like Bob did.

What is the difference between people who have terrible  blood sugar control and Mr. Krause?

Mr. Krause then goes into more specifics relating to his strategies for successfully managing diabetes.

The former University of Washington mechanical engineering professor says he’s succeeded because he treats his body like a car and he only eats enough food to fuel the machine.

“To keep your diabetes under control you only eat the food you need to before you have activities to perform,” Krause said. “I eat to keep me alive instead of eating all the time, or for pleasure.”

He says he’s not as active as he once was, so he doesn’t need a lot of fuel — or variation in diet. For breakfast every day, he eats a bowl of nuts and five pitted prunes. He usually skips lunch and eats a salad with some lean meat for dinner.

While I rarely eat nuts and fruit  ….and my meats are fatty meats, our meal plans have many similarities …

Where is the bread and cereals with the “healthy whole grains” and legumes pushed by the American Diabetes Association (ADA) and American Association of Diabetes Educators (CDEs)???

I LOVE IT!!!   He normally eats breakfast and dinner… skipping lunch. I myself usually skip breakfast … but that’s me.

Why does he not eat 4-6 meals like the ADA and the diabetes educators suggest?

Because Mr.Krause would not be successfully managing diabetes if he did.

Why does he not eat legumes, breads, cakes, cookies, bagels, cereals?

Because Mr.Krause would not be successfully managing diabetes if he did. 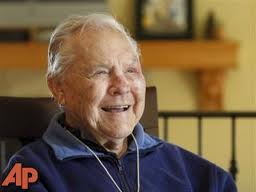 “… his family and friends celebrated his longevity Sunday with a party and a medal from the Joslin Diabetes Center to commemorate his 85-year milestone.”

If Mr. Krause ate like Joslin’s wanted … he’s be like other Diabetics… whining and complaining of soaring blood sugar highs and crashing lows.  And he’d likely not be alive today.

If anything, Wu has worked with Krause over the past three years to be a little less rigid so that he doesn’t overdose himself with insulin and push his blood sugar too low.

It can be tough to change the patterns of a patient who has dealt with an illness for so long.

I’m guessing Dr. Wu is a Joslin associated doctor who promotes the high carb “carb up and shoot up” diabetes treatment plan as promoted by the ADA, CDEs and Joslins.

For the doctor to ASSUME that they can teach Mr. Krause ANYTHING is ridiculous.  Quite the contrary… it’s the other way around.

Diabetics following the ADA high carb meal plan have faces filled with anguish and ‘defeatism’, as they have GIVEN UP their battle with diabetes. They give up and give in to the CARB UP and SHOOT UP diabetes treatment plan.

If you will successfully manage diabetes, by maintaining truly normal blood sugars the complications GO AWAY!

THERE ARE MANY who are beating diabetes….  More low carb paleo stories including Dr. Bernstein.