The diabetes epidemic is real. If you walk around in public and listen to people, diabetes (or it’s consequences) is a growing topic of conversation.

According to this article on obesity by the WHO, worldwide overweight rates are an astounding 39% and obesity rates are 13%.  That’s a lot of potential Big Pharma and Medical Industry ‘customers’. That’s not the US, those are worldwide percentages. 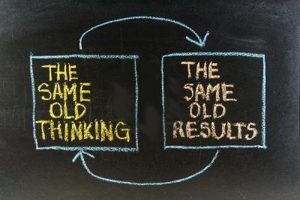 Doing the same thing over and over (promoting a high carb, grain-based diet) and expecting different results is not insanity … it’s stupidity.  Yet ‘experts’ continue to promote the ‘same old’ failed dietary advice.

I found these articles thanks to a link shared by Deborah Krueger who blogs and chases down scams at Low Carb Scams, @lchfDetective on twitter. :)

According to this Global Obesity article, ““Not only is obesity increasing, but no national success stories have been reported in the past 33 years,” researchers in the Lancet wrote in a 2014 report funded by the Bill & Melinda Gates Foundation.”

The WHO reports the worldwide diabetes rate to be 8.5%.

This number is truly astounding.  Why?  The US diabetes rate is estimated to be 9.3%.  The world is fast approaching the obesity and diabetes rates of the US!

Look at this chart, it breaks diabetes down by regions. Diabetes is growing in every region on the planet.  Literally 100’s of millions of people suffer, while a relative few profit. 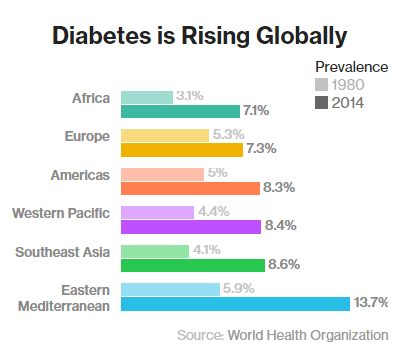 Here is a recent conversation I had with a diabetic in a grocery store.

If I meet an obese or diabetic person, depending on the circumstances I will usually tell them my story.   While in a grocery store in the fruit section an elderly, overweight lady walked up.

Me: “This is a great deal on avocados.”

Lady: Yes, avocados are healthy even though they are high in fat.

Hmmm. Like most people today, she’s been programmed to believe natural fats are harmful. Yet, she knows avocados are healthy… so I gave her my spiel.

Me: OK, here’s my story. I successfully self-treat my diabetes and lost 80 lbs, weaning off drugs and insulin.

Lady: I have diabetes, how did you do it?

As she literally, turned and walked away.

Me: Have a great day.

I felt sad as I walked away, knowing what likely lays ahead for her.

I no longer attempt to ‘push wet noodles’. People who are not interested or unwilling to change their diet or lifestyle.

I plant the seed and hope it germinates some day … before it’s too late.

If someone is interested and I have the time I will go into my personal diabetes story in more detail.  All of my friends know that I was rushed to the hospital via  an ambulance and that I exited the hospital taking 4 insulin shots, diabetes, cholesterol and hypertension drugs, just to survive.

Today and since 2009 I have been drug and insulin FREE!  All while maintaining truly normal blood sugars.

As millions of people become diabetic worldwide, the harm to people is accruing. In the early stages of the disease diabetes can seem benign. The damage to the cells and organs is occurring, but it can be unnoticeable until organs and systems fail.  That’s what happened to me in 2009 as I was rushed to the hospital via ambulance.

I talk to diabetics who are in their words, ‘doing just fine’.    Yet report a host  of health problems related to elevated blood sugars.

I could tell more stories of people with heart disease, strokes, kidney failure, liver damage, etc.  And yet people will look me in the eye and tell me their blood sugars are ‘just fine’.

The pain and suffering continues to grow… who benefits from this?

Not the people of the world.

Big Food, Big Pharma and the Medical Industry all profit.

100’s of millions suffer, while a relative few profit.

I can’t save every diabetic… but if I can save one, it’s worth it.