I had to drive my son back to Wilmington, NC and yesterday was my first full day.
I wanted to give you an idea of my ‘day’ so you would see that at 50 years old, as a former diabetic and formerly obese  person… I am TRULY

A phrase that came to mind today and it certainly applies to me… I hope it does or will apply to you. Paleo has …

“added years to my life but more importantly, it has added life to my years!”

I am in Wilmington, NC once again. My son goes to school here and I had to bring him back. I decided to stay with him a couple of days.

I dropped him off at class and then Ollie and I decided to spend some time walking the waterfront and down town areas… it’s a nice quaint town with beautiful views of the Cape Fear River on the waterfront. 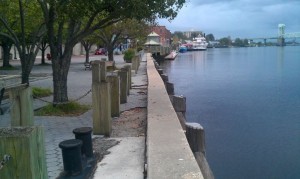 The Waterfront in downtown Wilmington, this is the Cape Fear River

Ollie and I walked around down town for over an hour which has nice hills above the river, it’s a nice place to “move slowly”.   I will tell you that walking with Ollie ‘leashed’ is a chore.   Apparently every step brought new aromas to be discovered. I have not taught him to ‘heel’ yet… so my arms and shoulders received a workout. :)

I have got to tell you a story about the picture of the waterfront. Prior to this picture, I had to clean up an Ollie ‘pile’ … and in the course of completing that task I accidently got poop on my finger.     Next, in taking this picture… as soon as I clicked the button something hit my knee with a loud “SPLAT!”

I quickly glanced at my knee and then looked directly skyward… a large Seagull had deposited a rather large amount of ‘bird poop’ on my knee!!!   I thought how lucky  I was … it could have landed on my HEAD!!!!

I picked Brad up from school, it was raining.  Since we had Ollie with us, we decided to look for a restaurant that had outdoor covered seating… that would allow a canine companion to stay with us.  WE FOUND ONE!!!!    Brad knew of a restaurant that had the outdoor facility that we needed but we weren’t sure if they would agree to the arrangement with Ollie.

We got lucky!! …  the manager let us in as long as we leashed him, which we did.

I won’t name the restaurant because she said we were violating the health code but it was raining and no one else would be outside. 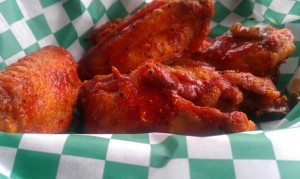 Other than pork rinds... this was my only "Eats" for the day. Naked Chicken Wings.

I had NOT played ping pong in decades.  What originally started as a place to eat and chill outside… turned into a 4 HOUR Ping-Pong-Athon! :)

Consumption?  Other than pork rinds, this was the only food I consumed all day.  Brad and I split 18 chicken wings.  I did drink several ‘low carb’  beers.  By the way, the next morning I felt totally fine, no ‘reaction’ to drinking a wheat product.

After FINALLY leaving the bar/restaurant,  to be honest I was ready to call it a night.  However, Brad wanted to take Ollie for a walk on the beach. We weren’t sure if we would have a chance to take Ollie to the beach before I left due to the weather and Brad’s class/work schedule.

Since it was not raining at the moment… we decided to take Ollie to the beach… at night.

I don’t have pictures of the event because it was dark by the time we got there… but it was a TOTALLY AWESOME TIME!

We went to a secluded and WIDE OPEN  part of Wrightsville Beach, the south end, where the ocean meets the Inter-coastal Waterway … did I mention it was AWESOME!

Ollie ran … and ran and ran.   Chasing seagulls and running back and forth from the waves… we laughed and played… so much fun. 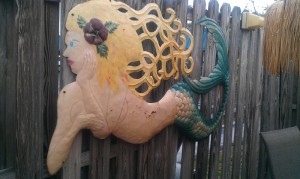 This was hanging on the fence around the bar... :)

Honestly …  two plus years ago I was miserable. I was a sick, obese person who had ‘given up on life’ to a large degree.

Today? … I am able to run, jump and yes… ‘run the tables’ at ping pong for awhile!

Being able to share moments like these are so special to me and I am so very thankful for being able to experience them… especially considering  just a few years ago I had all but given up.

I am truly LOVING LIFE!   I am TRULY THRIVING and not just surviving.

I wish you would join me…