This recipe… like ALL of my recipes are so simple… even a caveman can do it.

The advantages to cooking in a broiler pan … you can make large batches of food that can be frozen for later use.

Note:  This recipe works best with Rendered Bacon Fat… the “recipe” for that is at the end of the post.

1) Cut up chicken breasts into desired sizes. To speed up cooking time, I typically will cut a large breast into three pieces.  This recipe is approximately three (3) pounds of chicken breasts. 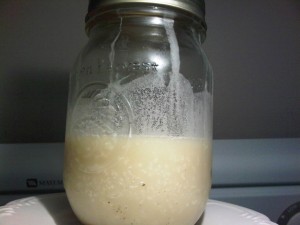 3) Evenly space the chicken pieces for even cooking. You can also add spices at this point if you like. I added pepper and Tony Chachere’s.  If you look closely at the enlarged picture, you can see the bacon grease on the bottom of the pan… mmmm good! :) 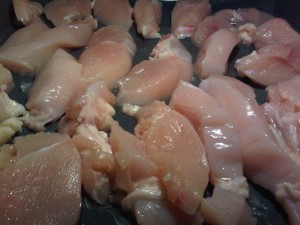 4) This step is Optional, especially since I used bacon fat to coat the bottom of the broiler pan…. but I LOVE bacon and just “had to” use this thick cut peppered bacon. :)     Just place the bacon on top of the chicken breasts. 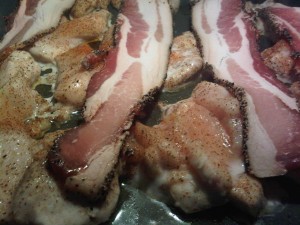 5) Broil on low for about 10-15 minutes.  If you choose, you can turn the breasts every 5 minutes. I normally do this because it aids in coating the chicken breasts in bacon juice … which improves the flavor AND it helps to keep the chicken moist.

I did not turn the chicken this time… only because I wanted the bacon & chicken to be “pretty”. :))

No worries though, I rolled the pieces around in the bacon grease after taking these pictures. :)) 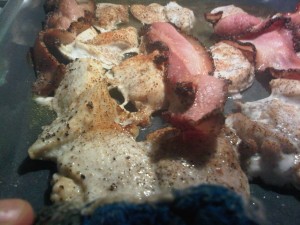 *** Folks… I urge you to investigate eating as I eat.  I call my meals “freedom meals” … because they keep me free of drugs and insulin.  That’s a pretty big deal for a Type 2 Diabetic that was taking 4 drugs and 4 insulin shots per day.

1) Line Bacon in the bottom of the broiler pan.

2) If in a hurry, broil on high but watch it… the bacon will only take 10-15 minutes to cook. If time is not a concern, broil on low. Of course,  it will take longer if you want it extra crispy, however this also yields more rendered fat.

3) Once the bacon has been cooked to desired crispiness, remove from the oven.

4) Raise a corner of the broiler pan so that all the “juice” (ok…it’s bacon grease!) drains to a corner.

5) Pour off the grease into a canning jar (any glass/porcelain container with a lid).

* IF YOU DO NOT use bacon fat often, you will want to use a strainer, so as not to add bacon bits to the container.

** I DO use Bacon fat frequently, I do NOT strain the fat/bits and have never had the bacon fat turn rancid.

6) Before using bacon fat each time….. I always smell the bacon grease. Why?

B) Just to make sure it’s still ok.

7) Keep the container refrigerated and it should keep fine for several weeks.

*** I always ADD bacon grease or coconut oil when I cook lean meats including fish, chicken or even lean beef/pork.
I urge you to become a DIABETES Warrior…. fight the daily battles….and fight them to WIN!