When dentists push high carb diabetes diets, can things get any worse? I remember my childhood dentist. He was a strict no candy, no sweets adherent.  Things have changed for the worst.

My childhood dentist would scowl at me, if I told him I was eating an American Diabetes Association style diet. Yet today, many dentist and other Standard American Diet (SAD) profiteers support it too.

It is becoming more clear to me what the root cause of our medical industry problems are …  after you read this post… maybe it will be clearer to you.

Single biggest problem with our Healthcare Industry is….

“doctors do not treat disease nor their causes … doctors treat symptoms, and usually with a pill”

MANY if not all low carb, paleo or primal enthusiasts feel the same way. This thought or idea is not even unique to paleo followers.  Bill Mahr states this in his video from several years ago. Click here to view it.

By the way, when I use the term “doctors” in this post, I am referring to General Practitioner or ‘family doctor’.

Why Do Doctors just ‘Treat the Symptoms’?

There are many reasons, I only want to focus on one.

“Too often, doctors rely on ‘industry experts”‘ to provide them with information on how to treat diseases”

Doctors can not be experts on every ailment known to mankind so they rely on experts to give them advice on how to diagnose and treat diseases. Unfortunately, too many times the  medical experts are either:

a) Tainted by Big Pharma money or ….

b) Big Pharma Sales Representatives themselves

The results are the same… if you have high cholesterol, take a pill.  You have high blood sugar….take a pill…and on and on it goes.

This point became clear to me the other day when I saw the tweet below on twitter.

I sent them tweets (below) stating ….  that desserts like this are not diabetic friendly. 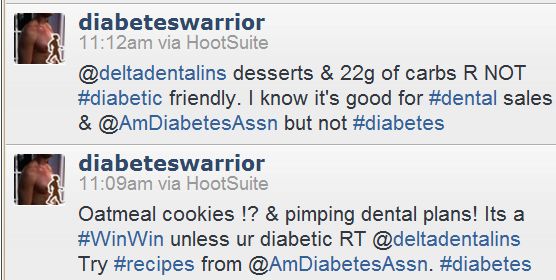 After sending these two tweets more jumped into the discussion… defending the original The Delta Dental Insurance Company’s tweet.   All were either dentists or were tied into the dental industry.

….  <sigh> I can remember when Dentists GAVE A DAMN and would NOT be ‘pimping sugary treats’….  is everyone greedy?!?!

…. are there NO honorable men or women left? 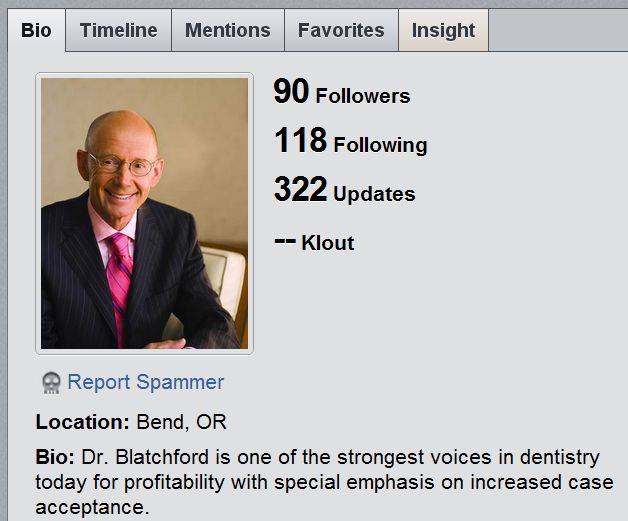 The picture above is a dentist who jumped in to help to support the American Diabetes Association meal plan.

This guy is has a website where he brags about expanding his dentistry business. May be handed out candy, cakes and cookies….like he was supporting for diabetics on twitter. If so…he’s a first class scum bag in my opinion.

If you read his “bio” you know why….    “…one of the strongest voices in dentistry today for profitability…”  Judging by this, I could be wrong but I’m guessing he is portraying himself as a dental expert on increasing dentists profitability. This OBVIOUSLY includes pushing sugar treats to others INCLUDING DIABETICS.

1) Why in the hell is a dentist pushing sugary treats as healthy for diabetics?

2) Why in the hell is a Dentist pushing the American Diabetes Association sugary treats?

– the dentist assumes the American Diabetes Association is an expert on Diabetes.

UNFORTUNATELY the dentist is wrong on BOTH counts.

Note:  The Delta Dental Insurance company…. they replied with , “point well taken”, which is close enough to an apology.

However the  “doctor” listed above protested initially but when I pointed out the hypocracy, he did not apologize … he  just stopped communicating about the subject.

This is an open invitation to them to debate their side of the argument. Since they can’t defend it… I’m not holding my breath on replies.

** PLEASE be careful with the advice you take … be it from a doctor, ‘diabetes educator” or even a dentist.  You must think for yourselves and do your own research.  The stench of  tainted advice is in the air. :(