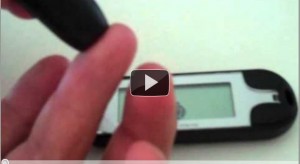 The last time I tested my Overnight Fasting Blood Sugar was while I was doing the Coconut Oil Fasting. (Posts are Summary, Day 2, Wrap Up).

There were several lessons gleaned from that experiment but the MOST IMPORTANT lesson learned is…. remove carbohydrates and protein… and blood sugar will decrease.  That seems to be an obvious statement to many (it was no surprise to me) but to vast majority of “diabetes educators’ … the opposite is believed. To most diabetes educators, diabetics should eat excessive carbs to reduce blood sugar.

Today’s testing would be the first in about two weeks.  I’ve mentioned this before BUT no matter how many times I read my blood sugar and it turns up normal … EVERY TIME I ‘test’ … there is an apprehension regarding the results.

Fear of the pancreas ending it’s insulin production is a fear for all type 2 diabetics … that is THE MAIN Reason of many that I follow a low carb primal meal plan.  I want to rest my pancreas by intermittent fasting and I want to NOT overwork it by eating high carb meal plans like the ADA.  There are other reasons of course, such as reducing drugs and insulin usage BUT THE MAIN REASON is to rest my pancreas.

Having said all that… let’s get on with the testing. :)

The first part of the video takes place this morning at 6:20 am.   That is early for me, I usually read my overnight fasting blood sugar in the 730-830 AM time frame. I mention this because at 6:20 AM, my Dawn Phenomena or Dawn Affect as some call it should be at it’s fullest affect.

What is the Dawn Phenomena?  It is an elevated blood sugar level that typically occurs early in the morning.  Opinions of the causes vary but the fact remains… it’s elevated blood sugar.  While I can’t prove this,  I feel very confident in saying that adherence to my MEAL PLAN and performing intense exercise like these have reduced my early morning blood sugars.

The second reading occurred around 12:00 (noon).  I had skipped breakfast (intermittent fasting) and had eaten a four eggs, several pieces of bacon and approximately 8 oz of steak.

Total carbs in the meal were approximately 2-3 grams of carbs.

I was somewhat surprised at the elevated reading of 101, given the low carb total but several factors likely came into play.

1) Chinese Restaurant Affect – As explained by Dr. Bernstein, whenever a person over eats (and I was stuffed) the blood sugar rises higher than would be expected based solely on carbohydrate totals.

2) The other reason my Blood Sugar could have been higher than I would have expected?  I read just 30 minutes post meal. I normally read 1 to 2 hours post meal which means that my body had less time to ‘move’ the blood sugar out of the blood stream.