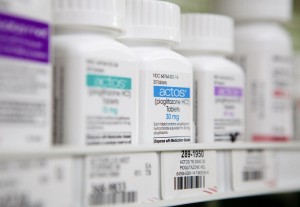 By the way, Eli Lily donated over $4 million in 2012 to the American Diabetes Ass.

The jury found the two companies hid cancer risks of their Actos diabetes drug!!!   It’s been known that Actos is linked to increased risk of various cancers, I wrote about it “Here“.

Note:  I took Actos for about a month when I was first diagnosed with diabetes in 2009.  Just think!!!  Had I stayed on the high carb, grain based ADA Way Diabetes diet… I would have increased my cancer risk!!!  … bastards. :(

This is why I say, “Do NOT take drugs needlessly!!”  You never know when they will find health risks…often it’s too late.

And you will never know if you are taking drugs needlessly until you eat a low inflammatory meal plan … like mine, “A Meal Plan You Can Live With“.

This court case raises a couple of questions in my mind…

The American Diabetes Association promotes a high carb, grain based meal plan that increases the need for drugs and increases the likelihood of developing cancer.

Should the American Diabetes Association be sued as well?

2) Will the American Diabetes Ass distance itself from two of it’s largest corporate donors?

… or will they continue to kiss Big Pharma’s ass, promoting a high carb diet… with their hands held out… palms up?

I think we know the answer to that.

My eyes have been opened to corporate greed  ever since I found that low carb meal plan helps me self treat my diabetes.

People will ‘sell their soul’ for profit, even if doing so harms millions of people.

I have tried to spread the message far and wide…   at seemingly every turn I’ve been opposed by the ‘diabetes establishment’, including diabetes educators, doctors, nutritionists and dietitians.

The only people who ‘win’ from the low fat, high carb, grain based meal plan is Big Pharma, Big Food and the Medical Industry.

This lawsuit is just further evidence that NO ONE should take a drug needlessly. If you take a drug… prescription or over the counter… I urge you to try a low inflammatory meal plan… like this one.