Bret Michaels is in the news due to complications from Type 1 diabetes.  I hold no animosity for the man Bret Michaels.

This post is an honest appraisal of his ‘fight with diabetes’ and a shout out to him to ‘do the right thing’. The picture below is Bret doing the rocker ‘thang’. 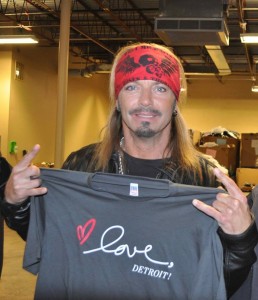 The Face of Diabetes

“To help the Association raise awareness about the seriousness of diabetes and the importance of prevention and control, Bret is  representing the “Face of Diabetes” …”

Bret Michaels is not a diabetes warrior .. he is a diabetes defeatist.

Bret Michaels is fighting diabetes complications no doubt…and he’s recently been fighting for his life.

But he is NOT fighting diabetes … if you doubt what I am saying… read this post, “Diabetes Warrior or Defeatist“.

ALSO … note the statement in the quote,

“raise awareness … and the importance of prevention and control…”

If you put yourself out there as a role model, spokesman or as a ‘face of a disease’… then you better take care of business.

You need to walk the walk in addition to talking the talk.  If you do not … you can harm thousands or even millions of people.

Relax Bret cult followers … there is proof below.

I pay attention to the comings and goings of people in the diabetes culture.

Sadly, to many of Bret’s adoring fans he is THE prime example of someone who is ‘battling diabetes’.

Despite what you may read in newspapers or diabetes news sites…

Bret does not maintain healthy blood sugar levels and therefore does much harm to those with diabetes.  He ‘makes it cool’ to maintain harmful levels of blood sugars.  If you hold yourself up as a role model … you need to walk the walk, and not just talk the talk.  I have seen 1,000’s of comments on blogs, twitter, etc  holding Bret up as a ‘hero’…. and role model.

Here Bret is quoted as saying,

“I am fortunate that I work hard to keep my diabetes under control; however there’s no doubt after 45 years my healing process is a little slower than a non diabetic.”

Here we are.  The ADA claims Bret is the ‘face of diabetes’ and Bret himself claims to work hard to keep diabetes under control…

Dr. Vollbrecht: First of all, if I could, my mom wants me to say “Hello.” And she wanted me to ask you what your A1C runs, because she always leads with that when she gets into a conversation.

My A1C usually runs in the high fives and sometimes the high sevens.

Those numbers are not indicative of someone who has ‘diabetes under control’.

Those A1Cs above produce the picture below…. it’s Bret in the hospital recently.   No doubt people will be so proud of him for ‘fighting diabetes’.  He is NOT fighting diabetes… he’s fighting the complications of elevated blood sugars. 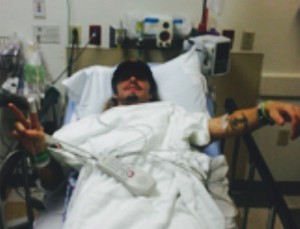 This is not Bret’s first hospital visit.  Back in 2010 he was hospitalized while winning awards and raising money for the American Diabetes Association.

Here the American Diabetes Association announces a partnership in ‘raising awareness’ in 2010.

“Bret Michaels, musician and winner of NBC’s “Celebrity Apprentice,” has joined the American Diabetes Association in their movement to Stop Diabetes® by raising awareness about diabetes this November for American Diabetes Month.”

Michaels, the front man of the glam metal band Poison, was hospitalized three times in less than two months: first for an appendectomy, then for a brain hemorrhage, and finally for a mini stroke just days before the finale (during which time he was also found to have a small hole in his heart).

He was applauded back in 2010 for his bravery … and for being such a great role model for diabetics…..  I gritted my teeth.

If he were TRULY fighting diabetes … he would have much better control of his blood sugars.  There are many Type 1 diabetics with MUCH better blood sugar control… even with truly normal blood sugars.

Bret is no more a role model for diabetes than Wilford Brimley or Paula Deen. 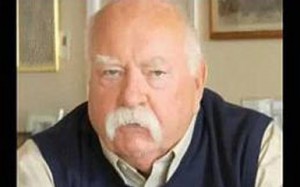 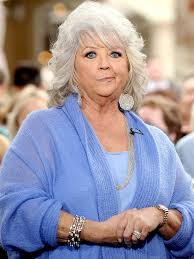 Instead the industry should be picking diabetics like Dr. Bernstein or the growing numbers of us who successfully manage diabetes. NOT picking people to be the ‘face of diabetes’ who are failing miserably.

I would hope that Bret would ‘see the light’ before it’s too late.   I would urge him to be a true DIABETES WARRIOR!!!  … instead of a diabetes defeatist who will ultimately succumb to the ravages of the disease.

There is a better way to self-treat diabetes.

The carb up and shoot up diabetes protocol leads to much pain and suffering.

People following Bret’s example are doomed to the same fate… I see it every single day.