It also begs the question of why cardiologist keep thinking that the cholesterol fed rat (or the equally poisoned Syrian hamster) has anything to do with human arteriosclerosis. – Petro Dobromylskyj

Learn From My Mistakes

I have Diabetes but I have never been officially “typed”, the last word from my doctors is that I am a Type 1.5. This means that I have reduced pancreas function and if I live long enough, I will at some point lose 100 %, which will result in daily insulin requirements.

Originally, in the hospital, I was told I was a Type 1 … then a Type 2 and lastly a Type 1.5. According to my physician here is his best guess at what happened, I obtained a virus that shut my pancreas down…leading to the hospital stay. The insulin therapy allowed my pancreas to “rest” and then it partially re-started. He stated that my pancreas is in a “honeymoon” period which could last for 3 months, 6 months or longer… that was almost 14 months ago.

The reason I mention all of this, periodically my Overnight Fasting Blood Glucose (OFBG) will rise into the upper 90’s and low 100’s. Every time this happens, the FIRST thing that pops into my mind… “my pancreas is failing…THE HONEYMOON IS OVER!” … But when this has occurred in the past, I would decrease my carbohydrate consumption into the 20-25g daily range and my OFBG would “re-adjust” into the 70’s and 80’s again.

This was the case in December ’09, I went very low carb and once again my OFBG had been in the 70’s and 80’s. Normal OFBG for non-diabetics is @ 85… so I was flying high. So high that I decided to quit testing my BG. When I began re-testing again, a couple of weeks ago, my OFBG was in the 90’s to low 100’s. The problem… I was already eating very low carb… so going lower carb was not going to make much difference. I decided to switch gears so to speak. I decided to take a break from P90X & sprints (my normal workout routine) and I decided to run longer cardio runs to see if it would have any affect on my OFBG.

After the 141 reading, I re-tested a few minutes later … 133 … so it appeared that my BG really had gone up… considerably. Many thoughts raced through my head…the only thing that made sense… I WAS LOSING PANCREAS FUNCTION. In talking with friends, I had received a couple of possible reasons for the increase:

1) The chronic cardio (running) is inflammatory and this may have been my body’s response.

2) Excess protein causes a BG response… I knew I was eating a high protein diet but I did not know how high.

3) Meter Error : … ruled that one out as I had tested this unit only a couple of months ago.

At this point I had already discontinued the longer running so I decided to reduce my protein consumption.

For the next five days I have attempted to reduce protein…and I have…. I think.

Problem: I did not count protein before I began journaling, so I really can’t prove that I have reduced protein grams. I am still eating more than is “normal” but I feel sure I have reduced from previous levels.

The first three days of this “test” I had been disappointed… my OFBG has been in the 103 – 109 range. Then things changed for me….

…. I ran out of strips…while I was looking for some spares I found a spare meter and thought…let’s give it a try. I tested 97 and 91…. 2 and 1 hours post meal. WHAT a relief!!! Long story short… I went out and bought a new meter, my old meter was “bad”.

Using the old meter on Tuesday I had a 109 fasting BG.

Thursday morning… I read a 83 !!! … it appears for now all is well on the Blood Glucose levels.

At this point, the only thing I know for sure is… my BG levels are back in the normal range. Was it ever really high?? I doubt it , I am guessing that I did all this testing and more importantly…all this worrying for NOTHING.

I should have TESTED my meter before jumping to conclusions.

Fats: …. percentage of calories from fat is ON THE MONEY. 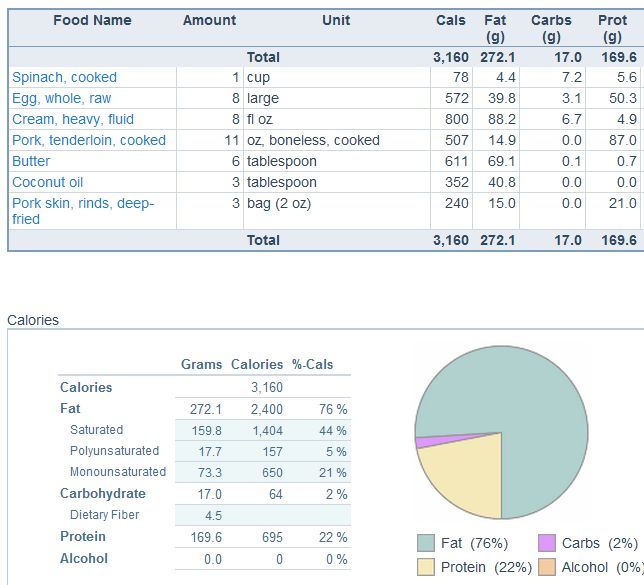