Like most conventional medical or dietary wisdom these days, there is a kernel of truth wrapped with layers of falsehoods. No one will argue that canines and humans need more exercise. 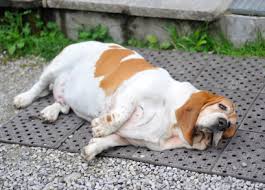 Many debate the contention that humans should eat mostly meat, unsuccessfully in my opinion but no one can argue that our furry canine (and feline) friends should be eating mostly meats or animals for foods. Are saturated fats and low fiber diets causing dog diabetes?

Fast food and specifically the saturated fat and beef protein are being blamed for rise in diabetes and obesity. The experts would lead you to believe that saturated fats from beef and pork are the cause of our nation’s epidemic of obesity and diabetes.

The evidence is not lining up with that contention.

I am NOT an advocate for fast foods, since 2009 I eat fast food once or twice a year. I typically eat a ‘bun-less burger’ or a salad.

Think about this as you read this post, IF saturated fats cause obesity and diabetes … why is Canine Diabetes growing at an alarming rate too?

“The number of dogs diagnosed with diabetes mellitus has increased three-fold in thirty years…. ” ~ Diabetes in Dogs

1) McDonald’s?  I loathe McDonald’ s, not only for their product offering, not only because they market strongly to kids, but also because of their association with the American Diabetes Association.

BUT  not even I would lay the bulk of the blame for canine diabetes on McDonald’s or any fast food companies.

I haven’t seen many dogs sneaking out and visiting the late night drive thru at McDonald’s.

True a dog will receive an occasional last bite of a burger or a few uneaten french fries… but compared to the amount of fast food humans eat, dogs eat a small fraction of their calories from fast food leftovers. I know some canines may but those cases are rare, remember we’re talking a 300% increase in 30 years.

2) Nor are canine companions raiding the refrigerator at night while the family sleeps, chowing down on steak, pork chops and chicken thighs.

So if dogs are not stuffing themselves with Super Sized Burgers and fries from the ‘Late Night Drive Thru” and if they are not wolfing down Steaks, Pork Chops and leftover creamed potatoes … what could be causing the three fold increase in canine obesity and diabetes.

I know, I know… the American Diabetes Association which receives millions of dollars in donations annually from Big Pharma, Big Food,  and the Sugar Lobby does NOT want you to believe this… but it is true.

Excess grains and carbohydrates are the root cause of type two diabetes.

Canines receive the bulk of their nutrition from “dog food”.

Let’s look at the nutritional value of a leading dog food Purina Dog Chow. Dog food companies do not list carbohydrate amounts or ratios on their foods…. I WONDER WHY?!

You can get close by evaluating the nutritional information provided… but they know most of us are not going to go to the trouble.

Purina is a popular brand so I am going to use them as an example.

While some may argue (un-successfully) that humans evolved eating very little meat … I doubt the same could be said for canines.  Wolves and their descendants may have eaten some grasses occassionally there’s little doubt they are primarily meat eaters.

WHEN YOU FEED animals (including humans) who are primarily meat eaters diets that consist mainly of carbohydrates… diabetes risk is greatly enhanced. We are essentially feeding ourselves and our pets a diabetes diet…. a diet causing diabetes.

Next, let’s look at the ingredients.

I will only talk about two of the first three ingredients…. whole grain corn and corn gluten meal.

Not only do we fatten ourselves up with grains like cattle (corn is a grain) but we are also doing the same to our canine companions. ARGH!!!!! … and we wonder “why is canine diabetes growing??? ”

As for the other ingredients you can check out a more complete analysis HERE.

I found this website http://www.dogfoodadvisor.com and it was a big help for me… they do the analysis for you on hundreds of brands of dog food. I urge you to go there and check out your canine companion’s food brand.

It should be clear people…. we were not meant to eat grains which includes breads, cakes, cookies, cereals, rice and pasta. The few grams of saturated fat from a bite or two of a burger IS NOT causing an epidemic in canine diabetes.

And 10 – 20 grams of saturated fat is not causing HUMAN DIABETES either… it’s the sugar and carbohydrates.

Cut the carbs,eat natural meats and fats… and get healthy!!

4 thoughts on “Cause of Canine Diabetes”