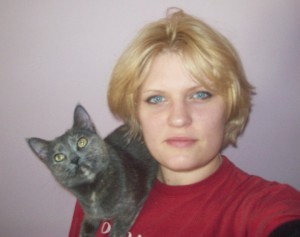 I love these “Paleo Stories” posts…

2) Because I LOVE HEARING SUCCESS STORIES!!!!  People taking positive actions and taking responsibility for their own health is very important today.

My first incident with diabetes came when I was 14 or 15. I remember I was in a fast food restaurant on the corner, hanging out with friends. At that time I didn’t know what was happening, but I had a horrid blood sugar drop. My eyes crossed and I about passed out. I remember I got better with a soda, but I had no idea what that whole incident was when it happened. Notice no one actually called 911 during that episode, which they should have.

Family History: Many of my family members have diabetes, including both my maternal grandmother as well as my paternal grandfather. On the maternal side, 2 Aunts had it as well. One Aunt has since passed away but not from diabetes, but cancer. My other Aunt takes medication for her diabetes.

I did not show symptoms again until I was 16 and pregnant with my oldest son. I had gestational diabetes and was told that since I had it, there would be a good chance down the line I would have diabetes. I was not on insulin at this point but no one really told me what to expect, what to watch for, I was fairly clueless.

Now I really forgot about it but I did tell every doctor I went to that I could have this issue. They would test me, and I would come out fine so it wasn’t a big worry. With my second pregnancy, I failed the diabetes test the first time, but passed the second. They said they weren’t too worried, but I was fairly careful with what I ate.

After his birth I started having more serious issues with hypoglycemia, which is low blood sugar. I had to carry candy with me all the time. I started watching my blood sugar more but it was always up and down. Rising in the morning it would be super low (in the 35-40 range). More years pass with it up and down. I noticed I couldn’t tolerate the heat in July and August (85+ degrees). Little things that were being an issue.

Then I became pregnant with my third child. My body lost it with this pregnancy. I couldn’t hold down food, I couldn’t keep my blood sugar up whatsoever. I was diagnosed again with gestational diabetes. My body went downhill. I was hospitalized through most of the pregnancy and had my tubes tied after she was born.

After her birth though, my blood sugar rose. I could not keep it down. The doctor was going to put me on glucophage and I was doing whatever I could to try and not go on the meds. My blood sugar never stabilized but it stayed under 200 (not always by much) so there was no drugs. Now again, more years pass with my diabetes now unstable, no real direction from the doctor other than to eat sugar free. I feel bad, fatigued off and on and I mean FATIGUED. As in I have to take naps around dinner time because I can no longer function awake. My joints started hurting and I am only 35!!!

I had on some extra weight (about 40 lbs) and for the life of me it would not come off. Then I meet Steve on the diabetes board! I could not help but notice his awesome results!! I paid attention to what he ate and it looked yummy too! He wasn’t hungry and the results were amazing. I started following his lead with eating more low carb and more protein. I wasn’t committed 100% yet because there were some things I had a hard time giving up. My blood sugar was going down, but not as low as I would like. I was in the 120-130 range which isn’t too bad, but it still isn’t that healthy.

I did not want to die leaving behind my young children, not ever getting to see grandchildren. I have a lot of things I still want to experience while I am on this earth! I splurged and bought The Primal Blueprint so I could commit 100% …. I did commit and it was amazing! The first thing I did was go gluten free. Gluten free is not inexpensive, but it is cheaper than doctor visits and watching my health decline. It is not that expensive if you plan out your meals weekly and buy the meat and veggies for each day. Always make a little more for lunch the next day! 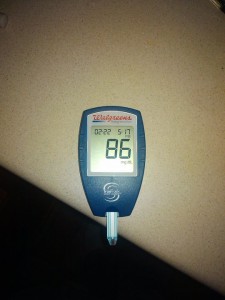 Since committing to the Primal Blueprint, about two months ago (and with good food ideas from Steve!!)

I’ve lost 10lbs so far (and counting!), I feel sooooo much better and my blood sugar was 86 today! Can’t go wrong with that!

I will not say that I haven’t cheated. I have with a birthday or a large party, but it has it’s effect. I don’t feel good after I eat that piece of cake. My stomach hurts fairly bad for the evening and I vow to not do it again.

I no longer cheat because it’s not worth it to me. I LIKE losing the weight. I LOVE feeling awesome and being able to accomplish more every day.

I will say invest in a crockpot and a steamer. I have a real issue with food not being convenient. It does take awhile to get used to cooking from scratch daily. The crockpot and the steamer helped immensely to cook foods while I just didn’t have the time.

It takes a bit to break a bad habit and instill a new one, but you will never regret it! NEVER!!!

Wow, thanks to Heather for sharing that awesome story with US!   I can feel her enthusiasm in the words of your story.  By the way, she is now drug, insulin free and as of yesterday … she had NORMAL BLOOD SUGAR, that is…. normal for non-diabetics. :))

… she had a REASON big enough to make her do this…. her children. She was fed up with feeling bad and decided to DO IT!

As Heather notes… you will NEVER REGRET IT!!!!

Congrats Heather and THANKS FOR SHARING!!!