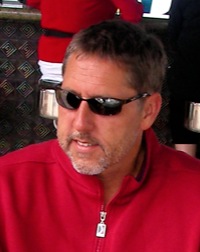 Most who know me, know that Mark Sisson author of “The Primal Blue Print” and “Primal Blue Print Cookbook”,  opened my eyes to ‘all things primal’  and I do quite a bit of promotion for him… free.  He did provide information that totally transformed my life…  He has NEVER mentioned me on his website … he has given me free product samples to review, “Primal Fuel – Diabetes Experiment”.

By the way, when I did the review… there was a whirlwind of controversy around the product when MANY in the paleo, primal community were saying very mean spirited things about not only the product but Mark Sisson as well.  The ‘safe’ thing would have been to have not posted at ALL.

I gave an honest review and YES… I lost FRIENDS over that post…but were they friends to begin with??

Point Being?  I don’t do what I do for money or for the recognition of “celebrities”.  Would I like recognition? … ABSOLUTELY I would.  Would I like to make this blog a thriving business? Sure… but I need to make it profitable first. :)  For now, it’s helping people and that is ENOUGH  for me….for now.

Giving Credit Where Credit is Due.

The bloggers who have meant the most to me can be found here, “Primal Proof“. The post today is about one of those gentle people… Richard Nikoley.  (…gentle… yeah… right!) LOL!

Why am I writing this post about Richard at this time? Richard keeps things stirred up much of the time so I don’t know if negative sentiments overall are higher than normal but in my circle of “paleo friends”, the negative sentiments are running high.

Normally, I do not or try not to get drug into discussions unless it involves diabetes matters. Too, if you don’t know… Richard can take care of himself, he doesn’t need my help. Regardless, I have remained silent until now.  I felt compelled to at least give my opinion of the guy and relate some personal testimony.

It is true that Mark opened up my eyes to Primal Living … but in many ways Richard was equally important in determining “who I am” today.

As I learned about all things primal, I wanted to TELL THE WORLD what I had found…. so I did. At the time, I knew what paleo/primal had done for me…. but I was a ‘baby grok’ and was still learning and growing in my knowledge. I did not feel comfortable going on the offensive against “trained diabetes educators”…. I was still being nice. :)

Part of my adult Grok Training was reading Marks’s Blog Roll… and THAT is when I found the soft spoken, mild mannered Richard Nikoley….  ok that’s a joke.    If you visit his blog, expect to read “F” Bombs … he does not ‘hold his tongue’, he definitely speaks his mind.

While I was reading Richard’s blog, “Free the Animal” I was also experiencing the realities of life….much like a young man does when he goes out into the world to make his own way.  I was SO naive!!  I thought that the American Diabetes Association pushed a high carb meal plan because they did not know any better.  ….  like a young, bright eyed, idealist I honestly attempted to inform “the establishment” of what I had found and what had worked for me.

At this time, I was ridiculed, mocked, banned and blocked from many diabetes forums, groups and boards. Couple this with discovering and reading the IN YOUR FACE, BRUTALLY HONEST, tell it like it is style of Richard… and I gained not only knowledge but confidence.   I grew tired of the ‘willful ignorance’ and pompous attitude of diabetes educators… all the while profiting off the harmful information they ‘fed’ diabetics.

I’ve had several blogs before settling on this one, I do NOT remember the post but when I wrote my FIRST RANT I was nervous… I was PETRIFIED to publish it.  I sought approval from someone more experienced to make sure I was on the right path.  I’d been aggravating Mark with questions and  I didn’t want to wear out my welcome so who was the next person I asked? … Richard Nikoley.

Richard has a business of his own as well as writing managing his very popular blog… I knew he was a very busy guy… YET he took the time to answer my concerns. Paraphrased his reply was something like,

“Steve, your post seems to be accurate to me.  You have personal experience backing you up as well, no one can argue with that.”

…. that was so empowering to me!!! First, here was a top paleo blogger telling me that I was right but not only that BUT….

… he was right!! I can go against anyone anywhere based on what MY experience was!!!  Since then obviously I have grown in my knowledge and I have many many more personal stories that all show… low carb primal reduces drugs and insulin … 100% of the time.

Richard also posted my story on his blog, “Two ADAs“… this TOO increased my confidence 100 FOLD.

Richard has also contributed to my knowledge and understanding too… he’s not just a ranter. His site has a WEALTH of information.

Two posts of the many stand out for me.

“All Diets Are High Fat Diets”  – this MUST be read… after reading this post. :)

“Gestational Diabetes”   –  this is a MUST read if you have diabetes… and I am serious!

So you see… I owe RICHARD MUCH!

1.  Richard has a style that turns some people off and he can be offensive to some.  I try not to offend ‘the people’ .so I shy away from sharing many of his posts. I could care less if  I offend someone promoting the failed nutritional policies.  They either know the truth or they purposely avoid ‘knowing’ the truth. Regardless…it’s on them in my opinion. They are paid to know the best means to control diabetes.

Sometimes I think … people need a villain … they need someone to hate. Luckily, I’ve found mine…. BigPharma, Monsanto, PepsiCo, ADA etc etc. … those that profit from the high carb, low fat nutritional advice.

YES… Richard can be abrasive and pompous at times.  Well guess what… so am I.

I have had more than one person tell me that my ‘attitude’ offended them at first but my dogged determination and persistent insistence caused them to ‘take a serious look’…. which lead to them changing their lives.

The lives I’ve help turn around can be multiplied by 1,000’s compared to Richard’s… and probably so can the number of people he’s offended.   SO BE IT!

Like him, love him or hate him…. up to you… but he changes lives …. he helped change mine.