What you eat and how you cook your foods says a lot about your diabetes diet. Early on in my journey, after months of eating ‘low carb paleo‘, I realized I either no longer needed certain kitchen gadgetry or re-purposed them.

The appliances required for devouring modern highly processed ‘food’… have vanished! They were never being used so I discarded these two items below. I do not eat bread, cakes, cookies, pop-tarts… why would I need a toaster?  Gone! I still do occasionally use a can opener, for canned tuna, salmon or mackerel usually, so I threw out the electric can-opener. 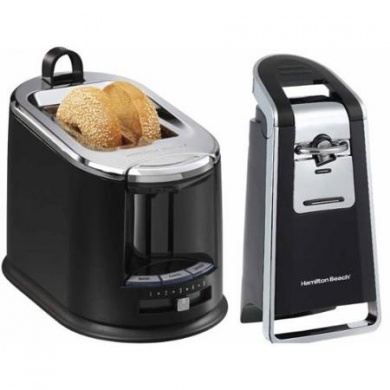 Note: I all but stopped eating canned goods due to the BPA levels in canned goods. I also try to avoid drinking bottled water for the same reason. I won’t go into detail now but BPA is an industrial chemical used in plastic packaging and in the linings of canned foods, that can leach into the foods. When I do eat canned foods, it’s usually fish and it’s usually like the one below.

Unless you have sources for wild caught fish, then try my first choice for seafood, Wild Planet. 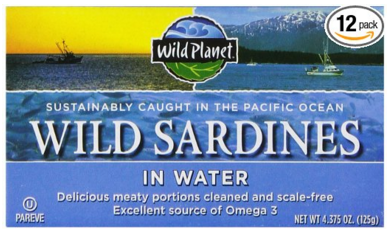 My favorite product is Wild Sardines in Water, but they also carry salmon, tuna, etc.

This post subject came to mind when I realized… I have NOT used my gas grill in forEVER…. why? Because I love using my cast iron skillet instead; the meat juices remain and can be used to flavor veggies or to use later.  I also use my crock pot (nicknamed GROK pot) and broiler pan much more now.

In my previous life… I used my gas grill weekly at least. The last time I used it, I actually cooked food in my skillet on top of the gas grill.  The main reason I prefer NOT to use my grill?

The delicious and energy providing meat fats drip onto the hot coals below. 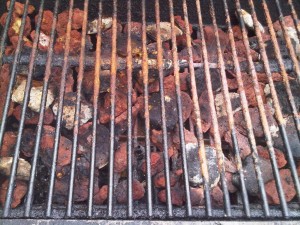 Above is a picture of my seldom used and neglected gas grill…. we were once good friends. In the distant past, rust was NEVER allowed to form on my grill.   I still grill, but not very often. I still love the taste of meat cooked on an open fire.

Also, I’d like to add, I no longer use the top part of our broiler pan…. only the bottom section is used.  I love for meat to cook in it’s own juices…  much more juicy and flavorful.

This post IS about changes in my ‘primal eating tools’ and environment as well ….  have you experienced these changes?

These changes were more gradual for me because…..my family (wife and sons) did not progress as I did to a primal lifestyle.  A major development in affecting environmental change was my sons leaving the home for school.  I said, ” instead of buying new… why not give them items we rarely use”….  :))

Here is a picture showing tools for neolithic eating…. a can opener and cheese slicer.  Yes… I still occasionally eat canned goods, but it’s limited to about once a month when I use canned tomatoes for my chili. I don’t always use tomatoes so their use has greatly been reduced.  We are no longer using the electric can opener… it’s been re-gifted, it takes up too much space and for a can of tomatoes per month… it was a waste of electricity too. :) 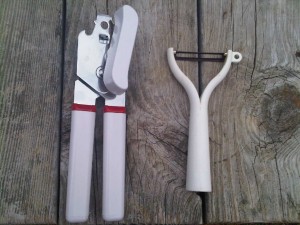 The other implement is NOT a potato slicer… oh sure, in the past it was.  NOW it’s a  Cheese Slicer and is still used but sparingly … it once played a central roll in our family’s nutrition as I prepared our weekly pot of creamed potatoes…. but… NO MAS! :)

This next picture is another ‘tool’ that has not been discarded but rather, has been put to better use.  In the distant past, this metal tray was primarily used for making toast in the oven…. or for cooking potato skins.  You certainly can not use it for cooking meats!!! … especially not the meats I like, fatty meats. :)  Therefore I use it as a tray for my re-used egg cartons. I am growing seedlings with this set up.  I will pour water in the tray and it keeps the seeds moist. :)) 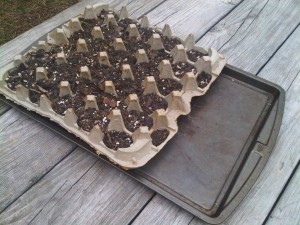 The next two pictures show two corners in our kitchen.  The one corner with the crock pot, in the past housed our  electric can open and our bread toaster.  The “GROK POT” as I like to call the Crock Pot, was only used a couple of times a year… now it has a prominent role in our meal planning and is used several  times a month or more.  Both the electric can opener and ‘toaster’ have been re-gifted. 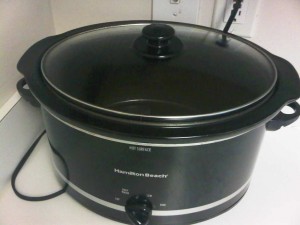 The picture below shows another kitchen counter corner. This corner was filled with white porcelain containers of rice, sugar, flour and salt….  those containers have been re-gifted as we no longer have a need for their use. Now we have much more counter space … 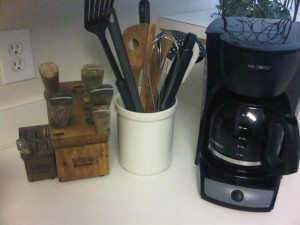 What changes have you noticed in your own home?

If the answer is “NONE!”, then maybe you are not doing it right.

I’ve mentioned the changes in my PERSONAL health many times … if you are new to the blog, you can read about me, here, here, here and here…. :)