I am SO GLAD IT IS OVER!!! … this is the LAST time I am posting about a lowER fat experiment.  I had wanted this experiment to go longer… but I “caved in to the fat”. :)

I’ve tried twice this year to go lowER fat  and each was less than a true success, still there is information to be gleaned that may help you.

Let me state from the outset… my ‘experiments’ are certainly NOT controlled.  In other words, when I go lowER fat versus highER fat … there are many other variables that are NOT controlled.  Add to that the extreme complexity of the human body … and it is very difficult to claim any ONE thing is a ‘definite’ .

HOWEVER, that does not mean that my experiment does not contain useful information… I think it does.

Stick with me while I do a brief recap….

There were three experiments.

From late May until the middle of June I tried a highER fat meal plan. I averaged 77% of my calories from fat.

I took a couple of weeks off while I ‘free ranged’ :)   That just means eating what I wanted (always low carb paleo). 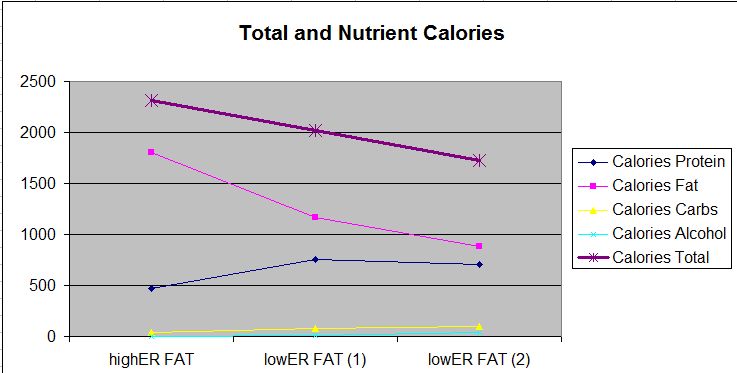 1) The top line is Total Calories… despite reduced calories in each experiment… by the end there was essentially no weight loss. Technically there was one pound lost, but given the daily variances… I call it a wash.

I’ve never been a believer of “calorie in, calorie out’ … but still, this was a shock.

2) Calories from fat definitely dropped each ‘experiment while calories from carbs increased slightly, as planned.

The next chart concerns the last experiment ONLY …  the lowER fat (2) experiment. 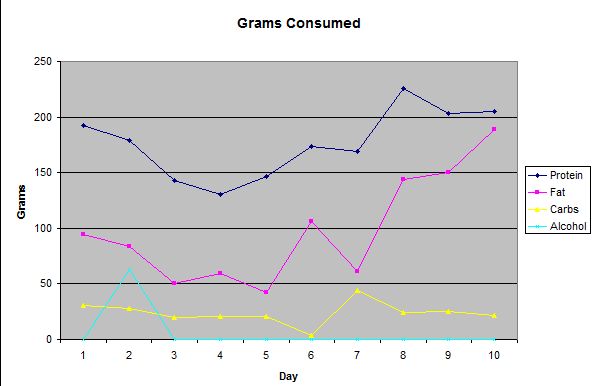 One would think that keeping carbs low, a reduction in fat would increase protein, which it did overall.
2)  Last three days … on day eight (8) I purchased heavy whipping cream, CAN YOU TELL? :)

Prior to buying the Heavy Whipping Cream… my percentage of calories from fat was in the 48% range and it finished @ 51%.

So what can be gleaned from these experiments?

(See the  addendum at the bottom of the page)

3)  Set Points – I’ve been a believer in ‘set points’ regarding weight loss. I believe that once the body reaches a set point, I think it does take a serious ‘shake up’ to move in another direction.  Some may call this a ‘stall’ or ‘plateau’.

I BLEW threw 78 lbs of weight loss… like it was nothing.  I may have had a stall or two along the way… but it did not last long.

In two years I’ve never exceeded 51 grams of carbs… and typically in the 20-30 grams per day range.

** The only time I’ve lost weight quickly since my initial weight loss… was when I went on the coconut oil fast… hmmm maybe it’s time for another one of those…. :)

As noted above, this was not a controlled experiment.  There were several variables that were noticeably different in this experiment that should be stressed.

1) Sleep –  I RARELY obtain 7 hrs of sleep, obtaining enough quality sleep has always been an issue for me.  I’ve gotten even less sleep during this experiment.   We adopted a canine companion pup … and he has disrupted my weak sleep patterns.   Four to five hours per night is the norm and even that is not un-interrupted.

2) Exercise – I went from ‘two a day’ INTENSE exercises  during the highER fat experiment…. to once per day during lowER fat (1) experiment.  For lowER fat (2) … I exercised only about once a week, twice at the most although I did walk multiple times daily. This was mainly due to a lack of sleep…  I do not attribute it to a reduction in fat consumption. Why?

On days after a decent amount of sleep … I eXercised intensely.  One day, setting a personal record for Maximum Push Ups in 15 minutes.

I hope this help someone, somewhere, some how. :)

Addendum – the day after this post, my Overnight Fasting Blood Sugar was 107 … each day since  ending the lowER fat experiment (adding back fat) my blood sugar has reduced, this morning… 87 … back to NORMAL Blood Sugar.  :)) 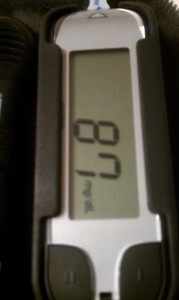 One thought on “lowER Fat Experiment – is OVER”