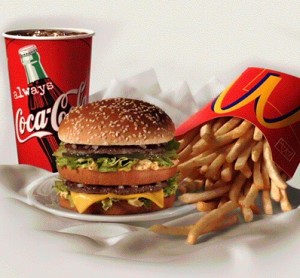 In the post from yesterday, “Fats … AND Red Meat Linked to Type 2 Diabetes?? ” I started out by discussing how I evaluate nutritional and fitness information.

1) Evaluate the information based on my own experience.

2) Search through my Blog Roll to see what fellow paleo adherents say on the subject.

3) Look at the information from an Evolutionary perspective.

… these ‘steps’ have helped me achieve success in self treating type 2 diabetes.

This Post will look at the article and study  “Red Meat Linked to Increased Risk of Type 2 Diabetes”.  In my opinion, the authors of this study had  an agenda… and ‘the truth’ was not on the  agenda…. see what YOU think.

I am going to show you what I look for in evaluating a study.

…often times this is THE ONLY thing you need to look at to know if the study will be ‘junk science’…  if a Big Pharma, Food Company or Governmental Agency is funding the study…  read it at your own peril.  Not many researchers will go against the funder, that tends to reduce future funding. And even if they do find evidence contrary to the funder…normally those studies are not published.
This study is funded by….

Honestly… if I read this I would normally stop right there.  I will continue for this article just for explanation purposes.

Why would I normally stop here?  The National Institute  of Health (NIH) is a proponent of the Food and Drug Administration’s “Food Plate” formerly  known as the Food Pyramid.   Their agenda is to push a high carb, grain based meal plan.

If the NIH funds a study… you know it will promote  high carb, grain based, low fat and low animal protein diets …. I’ll bet the ‘house’ on that every time.

2.  Who is performing the study?

Google is an awesome thing for intellectual curiosity …  I love it!   I will normally  do a quick google search  on the ‘researchers’ to see if anything ‘pops up’.

Adam M. Bernstein – just so happens… he performed a study back in 2010… “Coronary Heart Disease”

Study Conclusions— These data suggest that high red meat intake increases risk of CHD and that CHD risk may be reduced importantly by shifting sources of protein in the US diet.

A low-carbohydrate diet that derives fats and proteins from vegetable sources rather than meats is probably healthier, new research finds.

… there has been a lot of concern that a low-carb diet, which typically [incorporates] animal fat and animal protein, may increase the risk of chronic diseases…

…. plant-based low-carb diets get their fats mostly from vegetable oils, nuts and peanut butter, and proteins can come from legumes, nuts and whole grains instead of bacon and sausage.

Seriously??? This disgusts me.  Meat MAY have health risks… protein from veggies is PROBABLY healthier…  anti meat bias for sure. :(

He’s pushing a Raw Vegan or Raw Vegetarian meal plan…  in other parts of the article he actually says positive things about low carb meal plans… but his level of carbs is NOT mine.  There is no way you can eat legumes, nuts and whole grains and be LOW CARB!

1. Funder… = government agency = support for grain based, low fat high carb meal plan…. and guess what… THEY DID. :(

2. Researchers = two of the people I checked out had previous bias towards…. a grain based, low fat high carb meal plan.

Both had made previous statements AGAINST meats and high fat, high protein diets.   You must understand, when researchers say those things in the past, for them to ‘discover’ a TOTALLY different outcome… would disprove their previous studies. It would show they were wrong… that doesn’t happen often. 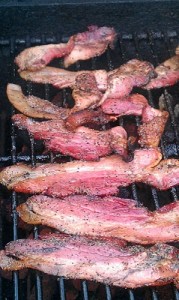 They are tainted by their own previous bias.

As luck would have it…Mark Sisson also critiqued the study… you can read a summary below, there’s also a link to his post … I SUGGEST YOU READ HIS ENTIRE POST… good stuff. :)

As luck would have it… Mark Sisson himself evaluated the Red Meat Study in this post, “Does Eating Red Meat Increase Type 2 Diabetes Risk” … he pretty much rips it to shreds. :))

Mark states, ” ‘hamburgers’ (but I’m sure they got bunless burgers right?)”

Pointing out one of my pet peeves when it comes to studies like this…  very few if any of the participants follow a gluten free/paleo lifestyle… so you KNOW the people reporting to eat two ounces of meat per day… (yes, as little as two ounces increased diabetes according to the study)  were NOT just eating meat.

They were eating bread, ketchup and fries with that meat… and most were washing it down with a ‘sugar’ drink.

2)  Confounding factors – People who reported eating the most meat were also most likely to:

In other words…  the study could have easily found a ‘link’ between diabetes and a sedentary lifestyle or smoking or alcohol or sweet drinks or obesity etc etc….

… but they did NOT … they singled out meat.

In my opinion, the study authors had an agenda…. it is so strange that they would report that 2 oz of meat PER DAY … would increase risk of diabetes.

It seems to  me their agenda is either grain or drugs sales…. or the vegetarian “religion”.