Home » Diabetes News » Is your medical industry professional … like this monkey? 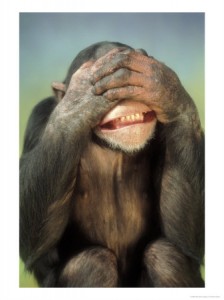 Is your medical industry professional like this monkey?  The purpose of this post is to educate them…and to shame them.

Are they covering their eyes so they can not see the truth… thinking that they can rationalize promoting a high carb, grain based meal plan to you because of ignorance?

Who are these ignorant medical industry professionals?

Doctors will whine when confronted, ‘oh I wasn’t trained in nutrition’… then stop preaching a low-fat, high carb, grain based meal plan to diabetics. If you talk nutrition, then be prepared to be ridiculed for it.  You can not have it both ways. You can’t claim ignorance and at the same time promote an unhealthy diet for diabetics.

Nutritionist / Dietitians – no excuses here.  It’s your job to know nutrition….  ignorance of low carb / paleo in 2009 … is one thing.  It’s a totally different to claim ignorance in 2014.  You would have to be hiding under a rock not to know the benefits of a low carb approach.

Diabetes Educators  – YOU of all people should be promoting a low carb, paleo approach to diabetics.  You know that most diabetics fail.  You know that practically all of them increase drugs, insulin and illness… and yet you sit on your hands and do nothing.

The graph below shows the results of a Very Low Carb Ketogenic Diet (VLCKD) vs a Low Calorie (LCD).

Seemingly every day I receive an email, message or comment about a diabetic who received horrible advice from a medical industry professional.  I can relate… I heard it as well.  Sadly, my personal experience  in 2009 is very common with newly diagnosed diabetics  even today.

“If I can figure out how to  self-treat my diabetes, drug and insulin free, why can’t the medical industry?”  Is it due to intellectual laziness, willful ignorance or greed? … or all three?

Since 2009 there have been many studies promoting or supporting a low carb meal plan for helping not only diabetes but other diseases as well.

Since 2009, literally  1,000’s more diabetics have been proclaiming the advantages of a low carb meal plan in blogs, on nutrition boards and in comments on high carb sites.  It is inconceivable that a Medical Industry professional can not know about the benefits of a low carb paleo style meal plan.

You would have to be a hermit living on a deserted island to not know of the reported advantages.  Well another option… if you were a monkey with his eyes closed and covered so as to purposely avoid seeing the information.

Is your Medical Industry Professional a monkey with their hands covering their eyes?

How in the HELL can you claim that you are interested in helping diabetics … and then repeat the same harmful high carb, grain based dietary advice … day after day after day?

If you check my disclaimer at the bottom of each page …

I am not a doctor, dietitian nor nutritionist.

In fact I have ZERO medical training and NO formal nutritional training. However, I am a formerly obese, drug and insulin dependent diabetic who was taking drugs and insulin …just to survive.

Following my own “diabetic diet” (backed by scientific research) I lost 78 lbs and I have normal Blood Sugar for non-diabetics, all while being drug and insulin FREE!

All of the above was accomplished with diet and exercise, no bariatric surgeries, no special lotions, potions nor pills.

If I can figure this out why can’t the Medical Industry?

The next time a Medical Industry Professional promotes a high carb, low-fat, grain based meal plan… ask them the last four questions in the previous paragraph.  :)