Home » Activities » My Visit with a Diabetes Support Group 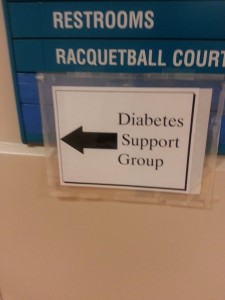 This post will recap my original diabetes nutritional seminar and tell the story of a ‘Diabetes Support Group’ I attended in November 2014.

Back in January 2012 I went to a nutritional seminar for diabetes… and it got ugly.

By the end of the meeting, some of the attendees were telling me to sit down and be quiet and the ‘diabetes educator’ was telling me her qualifications and asking me how many years of training I had… lol!

NOTE:  Very important.  Remember, I ‘was‘ obese… and I was formerly drug and insulin dependent.  The difference? I found a better way… I did not continue the ‘carb up and shoot up’ diabetes protocols. I teach people to be like me…. .

The obese, drug and insulin dependent diabetes educator was teaching the attendees to eat low-fat, high carb foods that would  …

She was teaching the diabetics in the room to be a typical  obese, drug dependent type 2 diabetic …

I could not sit on my hands and not present an opposing view.

That meeting in 2012 led to someone complaining about me to the NC State Board of Nutrition and DIEtetics…. which lead to the board telling me to shut up, which lead to me suing the state of North Carolina thanks to the Institute of Justice.

My Next Diabetes Meeting

I decided to go to a Diabetes Support group meeting in November 2014.

This was a totally different animal from the start.  It was a ‘support group’ and not a seminar.

The meeting facilitators were two women.

1) One was studying nutrition in college, she was the main ‘guest presenter’.

2) Another was a diabetes educator (I am assuming), seemed to be well versed and entrenched in the failed ‘carb up and shoot up’ diabetes protocol of the past. She waited on the sidelines to comment on the discussions. 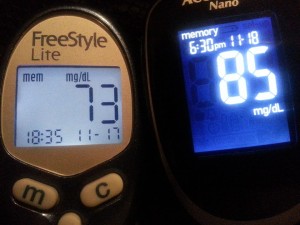 Before leaving to go to the meeting I took my blood sugar… BAM! :)

I am of normal weight and blood sugars … and I take no drugs nor insulin.

I walk into the room  and everyone there was very overweight … many were obese.

A gentlemen is telling the group how his doctor recommended a daily coconut oil fast from Saturday evening to Sunday evening every weekend.  HOW COOL WAS THAT!?  Other attendees were asking him questions. Of particular interest to me was the reactions of the ‘group facilitators’.  They seemed a little uncomfortable with the discussions but offered no negative comments. I am guessing because it was doctor sanctioned.

By the way, I’ve written about my experiences with fat fasts including a four-day coconut oil fast here.

As the meeting got underway the speaker passed around a couple of hand outs.

One was a sample ingredient panel.

Next Hand Out – What to Avoid

The next handout was not as impressive but I have seen worse… much worse.  It showed the ingredients to avoid:

Sugar – I won’t list them all but it was a great list including all of the words ending in – ose.  She did leave out the words ending in  ‘ols’ or sugar alcohols.  I didn’t mention anything … I was going to ‘pick my battles’. I was a little surprised sugar was on the list. :)

Refined Grains – included items like pasta, crackers  white bread, white rice and corn flakes. In this section it stated that ‘whole grains slow  the absorption of sugar in the bloodstream, providing lasting energy’.  I of course objected to this and stated that all breads will spike your blood sugar and that the minute differences were meaningless … or something like that. The facilitator nodded in agreement, but restated the earlier statement.

Trans Fats – margarine, donuts, cakes, breads were to be avoided.  YES… the list actually showed that these foods should be avoided.  During this discussion the ‘elder’ as I will call her stated that margarine was healthy. I objected because margarine is hydrogenated veggie oils AND it is on the list to avoid.  The Elder made a claim that a particular brand of margarine has less hydrogenated oils and was preferred…  I let that go but stated that I eat real fats including real butter.  No one responded.

Can you imagine the confusion of those paying attention???  Avoid margarine but in the same breath (almost) stating that margarine was healthy.  Avoid bread due to hydrogenated oils but eat it because it’s ‘healthy whole grains’….

Sodium – The usual claim of ‘eat less sodium’ was made.  I sat on my hands.  I typically only eat ‘real foods’ …  so I add salt to all of my meals.

Next up… the Video

“Is Sugar Toxic?”   … I was impressed.  I am not a huge fan of Dr. Lustig, but still … to show this at a diabetes meeting is impressive.  The ADA and their cronies the American Association of Diabetes Educators are fond of saying that diabetics have a right to eat sugar like everyone else. After the meeting I told the young facilitator that I was impressed that she showed this. :)

After the video a general discussion occurred.  One lady asked how many grams of proteins should she eat.

The Elder answered that women should consume about 45 grams and men about 60 grams.

I spoke up stating that I eat a lot more than that… but I do not eat a lot of carbohydrates that raise my blood sugar.  Then I stated, “but I have normal blood sugars and I am drug and insulin free”.

The Elder replied, ‘that’s fine if that works for you’.

The meeting wrapped up and I told the young presenter that I was impressed with her showing of the video  and I told her that I follow a ‘low carb paleo’ meal plan, she seemed receptive.

Overall, the facilitators seemed confused… stating one thing and then stating the opposite a few minutes later.   In addition to the previously mentioned bread and margarine examples …

Stating one minute to limit added sugars due to the increase in blood sugars but at the same time promoting store bought yogurt, breads, brown rice, potatoes, sweet fruits and … instructing the attendees to ‘count their carbs’.  These attendees would need a calculator to count carbs between the whole grains, fruits, potatoes, rice and beans.

Overall I did see slight improvement in what the diabetics were being taught.  Many diabetics are still being taught it is okay to eat sugar … as long as you ‘plan for it’.  That’s just ‘diabetes speak’ for making sure you take extra drugs or insulin to cover the sugar or carbs.

However, my suspicion is that it had more to do with the young ‘guest facilitator’ who brought the handouts and the video.

The next meeting will be a “Christmas Dinner” provided by the diabetes educators.

It will be interesting to see what they call … diabetes friendly.

In closing … reading the statement above… the information at the support group was a little better than some.  However the conflicting advice had to leave many diabetics scratching their heads and wondering what the hell they should eat.

Ebook: How to Reduce Blood Sugars