Can you pick the President of those entrusted to educate, motivate and inspire diabetics out of a line up?   Let’s see… if you can look at the pictures below and pick out the current President of the AADE?

Judging by the food … they are all horrible examples for all humans… but especially for diabetics.

The person on the far right showing off the HUMONGOUS ‘King Cake’ … is Deb Greenwood. The reigning ‘Queen Bee’ of Diabetes Educators.

That’s quite the ‘crown’ she’s showing off.

I too am a diabetes educator.  Every day I attempt to educate, motivate and entertain.

I try to show people that there is a BETTER WAY!  A better way to self-treat the disease.

I try to show people that they TOO can THRIVE and not just survive. Diabetes does NOT have to be a debilitating disease. It does not.

It will be if you eat like the ADA and AADE suggest… as the picture below suggests and even tempts. :( 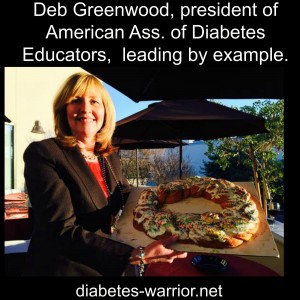 What do you think the President of Diabetes Educators’ example is ‘telling’ people with this picture?

I not only talk the talk, but I also walk the walk.

Deb Greenwood, the American Diabetes Ass. and the American Ass. of Diabetes Educators do neither.  They promote a high carb, grain and sugar based meal plan for those that need it the least.

Deb Greenwood is flaunting their ‘carb up and shoot up’ diabetes protocol and is rubbing it into the faces of diabetics… with this picture. Not cool.

They have no shame.

Today Deb Greenwood locked her twitter account so the public can not view her messages.  I guess when you are queen of the diabetic educators … you can’t have people seeing what you eat.

By the way,  all of my posts are public.  You can find me on Google+, Facebook and Twitter.

Congrats Deb Greenwood… you have won a spot on the Diabetes Warrior’s Wall of Shame and proven yourself to be providing irresponsible diabetes leadership.

With the diabetes and obesity epidemics, the people need responsible leaders… not more of  the same old ‘carb up and shoot up’ mentality.

The AADE should be LEADING THE WAY…

Instead they harm millions with it’s policies and the horrible examples they set.  Deb Greenwood is just another example of the irresponsible diabetes leadership that has plagued the diabetes culture for decades.