Home » Paleo Stories » This Could Be YOU! 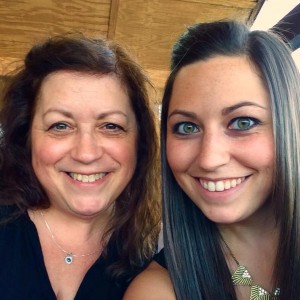 Love the SMILES! Two beautiful ladies, Christina and her daughter.

If you suffer from diabetes… keep this in mind, this could be you!  This could be YOUR story in a few months.
Christina Fultz’s story about how she responsibly & successfully self-treats diabetes.  Her story is not unlike my own, she too was an overweight, drug and insulin dependent diabetic.

I have a strong familial history of diabetes on both sides of my family. My Mother is only one of 2 children from 13 to NOT have diabetes. All died from complications of the disease. My Father died at 72 from a massive Heart Attack with Kidney Disease, several mini-strokes and being on Dialysis for 5 years. His Mother also died from complications from the disease and 2 of his three sisters are also affected. (Basically I was doomed)
I started watching my Blood Glucose levels way before I was diagnosed. In 2003 when my Fasting Blood Sugar started to creep toward 100 my doctor put me on Metformin, (250mg 2x daily). This caused me to gain a lot of weight. Still my Blood glucose readings were not great. She then sent me to see a dietitian to help me learn how to control my Diabetes with diet and exercise. She didn’t tell me anything I didn’t already know.
I continued to gain weight so the doctor upped my Metformin to 500mg 2x daily and told me to exercise more. I was getting so frustrated that I kept gaining weight while eating as I was supposed to eat. When my readings continued to climb she then added Glubyleride to my Metformin, the combination is known as Gloucovance. Still my Fasting BG number were not good and were now always over 120 mg/dl. The doctor put me on Lantus Insulin starting at 5 units a day. The numbers continued to go up. With the introduction of insulin I noticed a change in my body makeup too. Where I had always been a Pear Shape with most of my weight below my waist, I started to become an Apple shape. She continued to increase my insulin; I was now taking 12 units in the morning and at night.
I was now on 53 units of insulin 2x a day plus the oral meds. I was at my highest weight of 256. When Obamacare came into effect and we got insurance through the Marketplace I could go back to my old doctor who recommended I go see another dietitian and go to a class on how to properly use Lantus insulin Pens as I could not possibly be using them right. UGH!
I became an avid hiker then, walking/hiking up to 3 or four miles a day. Watched everything I ate. Switched to Whole Grains everything they told me to do. In September of 2014 I had Blood work done again and went to my doctor. I was really excited to see the results!! Even though I knew I had not lost a lot of weight, maybe 5-10 pounds I couldn’t wait to see my Good cholesterol numbers and Triglyceride numbers! I was really expecting an improvement in my A1C numbers too. Mine were always 7-9! When she read my results I actually flipped out on her! My A1C was 8.9, good cholesterol actually went down to 39, bad went up and triglycerides were terrible!!! She wanted me to start taking Lipitor which I argued was not necessary since my Cholesterol combined was under 220. I wasn’t taking Lipitor, I knew that!
She then recommended me to an Endocrinologist but couldn’t get me an appointment till the End of January, (this was September). Prior to this, I had started to research a low carb, high fat way of eating (LCHF). I was somewhat familiar with the diet as I had tried Atkins diet in the early 90’s but had trouble sticking with it. I decided that day at the doctors I was going to try it again!

I started October 1, 2014 Weighing 246 pounds. It really worked at the beginning. I lost 10 pounds during the fist 2 weeks and started feeling better. My blood sugar readings were a little better but not enough to lower insulin yet. I did LCHF for the next 3 months never cheating, never going over 20-25 grams of carbs a day. But I was gaining and losing the same 5 pounds. My blood sugar numbers were better than they had even been but still not below 150 for fasting an 180 throughout the day.

I followed all the Low Carb Pages and Forums I could. Sadly there is a lot of misinformation out there on the subject. I remember posting about my struggles and asking if there were any other diabetics having the same issues. it was then that someone suggested I look up Steve Cooksey’s Facebook page talk to him. That was in the Beginning of January 2015.

Here’s where the story gets good! I began to read all the files and posts on Steve’s webpage. It immediately became clear what I was doing wrong. I was still stuck in the notion that I had to eat every 3-4 hours and have 3 squares a day plus snacks. Wrong!

I also started reading about Steve’s journey with Paleo/Primal diet. I realized that although I had cut out the carbs and was eating better I had been eating a lot of processed low carb foods and too much Artificial Sweeteners. I was having a blast cooking with all the low-carb food items. I also realized I was not eating enough FAT!!!

When I started eating and preparing simple REAL Low Carb Foods something wonderful happened! My blood sugar numbers started to drop and so went my insulin. My brother is a Pharmacist so I consulted him about how to decrease my insulin. I saw my doctor in mid January and she was ecstatic that I had lost some weight. I told her I had decreased my insulin and she was fine with it and trusted that I was watching my numbers. She ordered blood work but I asked her to wait for three more months so I could give this way of eating more time to be reflected in the tests. Sadly she said she never heard of a Ketogenic Diet, LCHF, or a paleo meal plan.

By the end of March 2015, I was completely of Insulin!! My blood sugar numbers were better than ever and I had lost 22 pound total!

Next trip to the doctors for blood work results were amazing!!! Good cholesterol went up, triglycerides down. But the best part was my A1C1, I went from 8.9 to 5.1!!!! the lowest I ever had!!!

I started to decrease my meds with my doctor’s blessing. I continue to struggle with my morning BG readings which were still in the 110’s but daytime readings are always below 90. I think as my weight continues to drop so will that number. I joined a gym but found I like my hiking workouts better. When I got in a stall for about a month ago I tried intermittent fasting and Boom! Started losing again!

I am now happy to announce that as of today I am one week with no Diabetes medications, no insulin and happy my weight is at 210…the lowest since 1999!

I also have stopped my Cylexa to treat my Fybromialga. My excema has all cleared up and my Acid Relux/GERD is improving!!

I have followed all of Steve’s advice and really do credit him for my success!!! I was lucky to have met him online! I bought his book too!! Really makes things simple!! I still collect and save a lot of the LCHF recipes as kind of a hobby of sorts but I really don’t feel the need to eat anything else but the basics. Simple meals, real foods! Lots of Coconut Oil!!

Wow! What a powerful story!!! Thank you so much Christina for sharing!

Nothing I can add but I will mention a couple of things just to highlight them.

People come to me who say they are low-carb or paleo … but they do not have the success that I am having.  It’s because they do not eat according to this meal plan.

“When I started eating and preparing simple REAL Low Carb Foods something wonderful happened!   My blood sugar numbers started to drop and so went my insulin.”

She lost weight, reduced blood sugars and eventually weaned off of drugs AND insulin…  all this with normal blood sugars.  If you are suffering from elevated blood sugars, this could be you!

Congrats to YOU Christina and thanks again for sharing.