I love SCIENCE! Real, repeatable, replicable … science. There is very little real science in nutritional science and too little in other disciplines as well.

Bottom Line: Just because someone calls it ‘science’ means nothing to me … especially if its ‘nutritional’ science or if someone profits from the ‘science’. You must learn to question everything! Every thing. 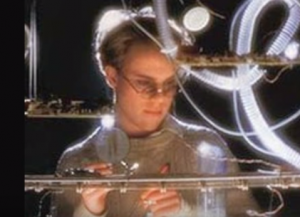 If you doubt me, maybe you will believe Dr. Horton of the Lancet, “The case against science is straightforward: much of the scientific literature, perhaps half, may simply be untrue.  … science has taken a turn towards darkness.”

In the middle of all this ‘bad science’, those crazy dietitians in Australia get caught putting their fingers in the cookie jar once again…

I first posted about them here, “DAA”. Just another dietitians group promoting high carb, grain based, low-fat for everyone including, diabetics.  Like all dietitian groups they are fighting and clawing attempting to maintain relevancy and the dietary high ground, regardless of whom they harm.

What did they do?

They shared this ridiculous picture, in an obvious attempt to claim authority based on their education and the initials after their name (certifications).

The DAA is attempting to ‘blind you with science’. 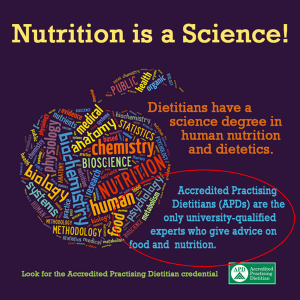 If Diabetes Warriors know anything … we know that education and initials after your name mean NOTHING when it comes to diabetes advice.

True nutritional science is about science.

But doctors, nutritionists and dietitians are far removed from real ‘science’.  The scientific method to them is memorizing flawed information … and parroting them as truth.

All diabetics who test their body’s and blood sugar reactions to foods and activities conduct far more science than the typical medical industry professional will ever see.

Dietitians claiming authority because they have degrees in science is utterly and completely LAUGHABLE!!!  … if it were not so harmful to the millions of people who heed their advice.

I shared the picture above on social media, I’m sharing the responses below.

Lisa Scherger: “I was told by a dietitian that my type 1 son could eat anything, even McDonalds. Just inject insulin for it. The stupidity of it left me speechless. So, they go to university to learn how to tell someone who are carbohydrate intolerant and produces no insulin to eat crap. I am convinced dietitians don’t even know what diabetes is!”

Frank Hultz: “A lot or at least some of the base science classes are legit knowledge. But the then the course is ruined by Big food & pharma literally design the context and application in direct opposition of that same science. Many times the science itself is corrupted from the get go by agenda driven dollars of funding and tainted research … (big science?)“.

Justin Godfrey:  “I remember when I was diagnosed and went to a class on diabetic nutrition. I was told Mcdonald’s breakfast would be a healthy option, just to replace any soda with orange juice. The person teaching the class was an APD pfft!!”

Rosemary Lucas: “What a joke. Corporate hucksters who are qualified to calculate a bolus and to teach 1950s era pseudo-science.”

Big Food, Big Pharma and the Medical Industry (including dietitians) could lose TRILLIONS of $$$ in future revenues.

Think about that. TRILLIONS of $$$.

The DAA is just a small piece of that, but as I stated above, the DAA is

… fighting and clawing attempting to maintain relevancy and the dietary high ground regardless of whom they harm.

Their reputations, careers and therefore income are at stake …

Especially if someone profits from the ‘thing’.