A diabetic goes ‘wild in Alaska’. This post will describe the first three weeks of my adventure,“Going WILD in Alaska”.

I’ll go into more detail later in the post but in short, I’m still thriving and not just surviving! Yes, even in the Alaskan wilderness, far away from medical industry professionals. :) 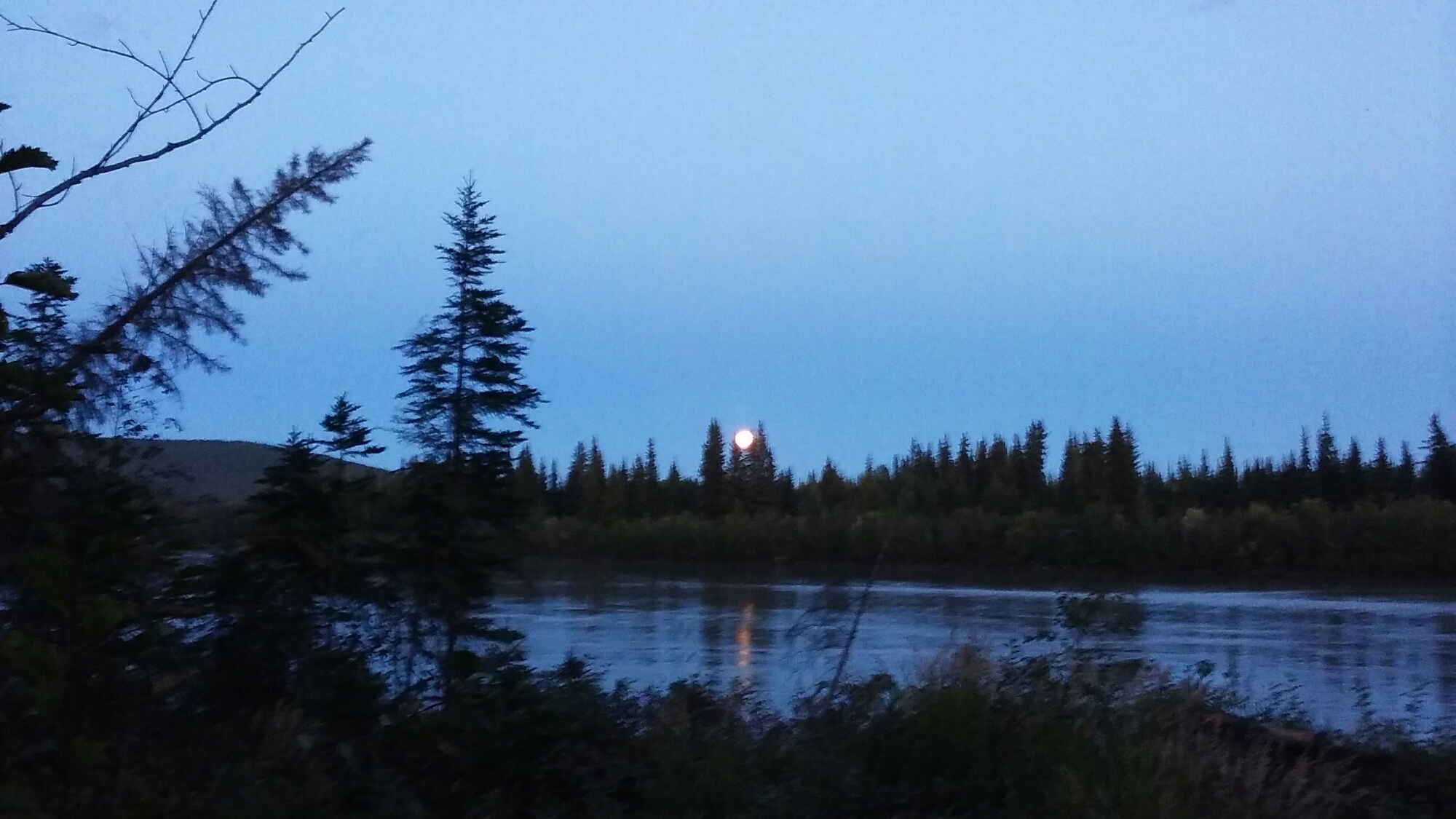 So many gorgeous pictures of nature and the Tanana  to choose from. Mother nature paints an amazng picture

I go into more detail in this introductory post, “Going Wild In Alaska“, here are the main points.

The wilderness camp is far from phone service, electric service and even roads. In short, we are off grid and living on the Tanana River in central Alaska, between Manley Hot Springs and Fairbanks.

The picture above is a sleogh or side channel, not the main channel. It’s a very wide river, with many channels and currents, some even flowing up stream. More pictures below.

I left North Carolina and arrived in Fairbanks, Alaska on 8/2. After spending a couple of nights at a hostel, Andrew Badenoch picked me up and we spent the next several days gathering supplies and gear.

Finally the day arrived! On August 8th, we left civilization! Leaving Nenana, in a motorized canoe, we headed to one of Andrew’s friend’s homes on the river.

The next day we left in two canoes on a cool, rainy morning, my canoe was being towed.

Later that afternoon, after Andrew gave me canoe and river instruction, I canoed alone. At this point we were about half way to the wilderness camp. After a break, Andrew asked if I wanted to canoe alone, the rest of the way, about 35 miles, while he took his powered canoe back to camp.

I nervously and yet excitedly said yes! I camped that night alone in an abandoned camp on the river. My solo adventure had begun!

The next morning, at 8:00 I shoved off on my thirty-five mile, solo canoe trip!

The Tanana River can be dangerous, its a very wide river with many channels and sand bars. I won’t lie… there were several times when I feared for my safety. One, the river has these swirls, similar to that made when water goes down a drain. If you stay moving, it’s easy to go through them. Once, I was taking a break in ‘dead water’ when a swirl arose around me. It startled me and actually began twisting my canoe!

The old heart began to pound but seconds later the water was calm again and I continued!

Later, while crossing the main channel, near the middle I found myself in shallow water. This can be dangerous as you can capsize, probably causing me to lose gear and supplies… or worse. But all was well, the canoe never ran aground.

There were other relatively minor events… all contributing to a heart pounding, exciting trip! One that I will never forget!

Below is a picture in the middle of the main channel during another crossing. Crossing the channel is always a little scary as large boats and even huge river barges can produce wake that can capsize the smaller canoes. The picture below gives you a sense for the size of the river. 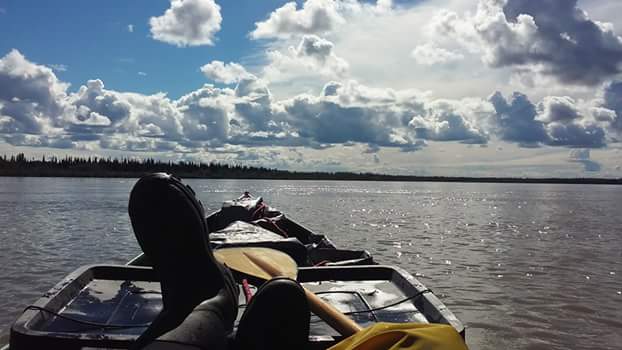 The first morning my fasting blood sugar was 92, acceptable but not great for me. I didn’t test again for several days. By the way, since my 92 … I’ve not had a Fasting Blood Sugar reading over 80!  I haven’t tested post meals yet, but my meals are very similar to the meals I ate in civilization, mostly fatty meats, bacon, eggs, butter and coconut oil. I am eating a little more cheese, berries, nuts and the occasional carrot side dish. 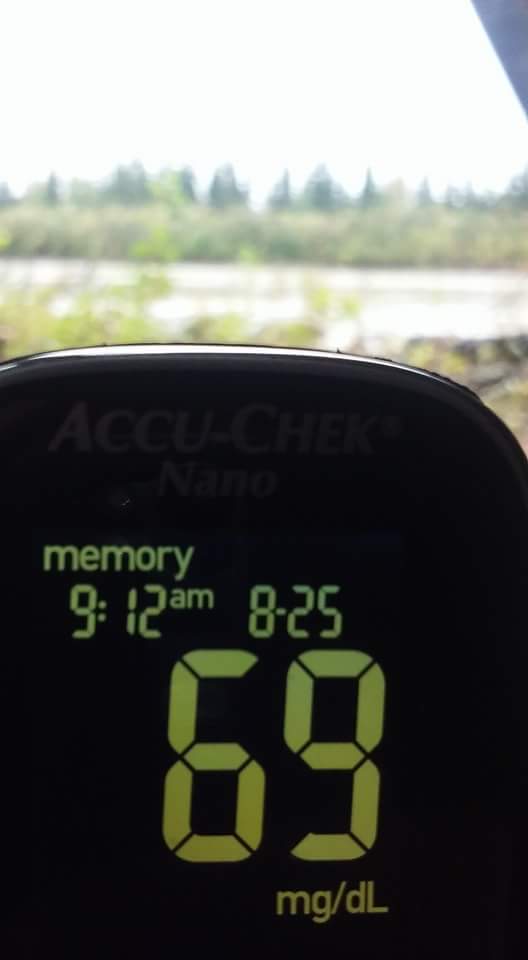 It doesn’t get dark until after 10 pm, so my sleep schedule is far different than it was in North Carolina.

I generally get up around 8:30 AM, wander down to And rew and Jennifer’s cabin around 9 for coffee and a crew meeting to discuss the work plan, usually building or digging is involved.

By 9:30 AM most days I am digging up stumps, forest sod… or mud. Glamorou

Work continues until 5:30 – 6:30 PM most days. I then chill for an hour until dinner. Dinner is typically my one and only meal… unless I grab a few of the abundant berries seemingly everwhere.

Below is picture of some of my digging efforts, about 7 stumps. 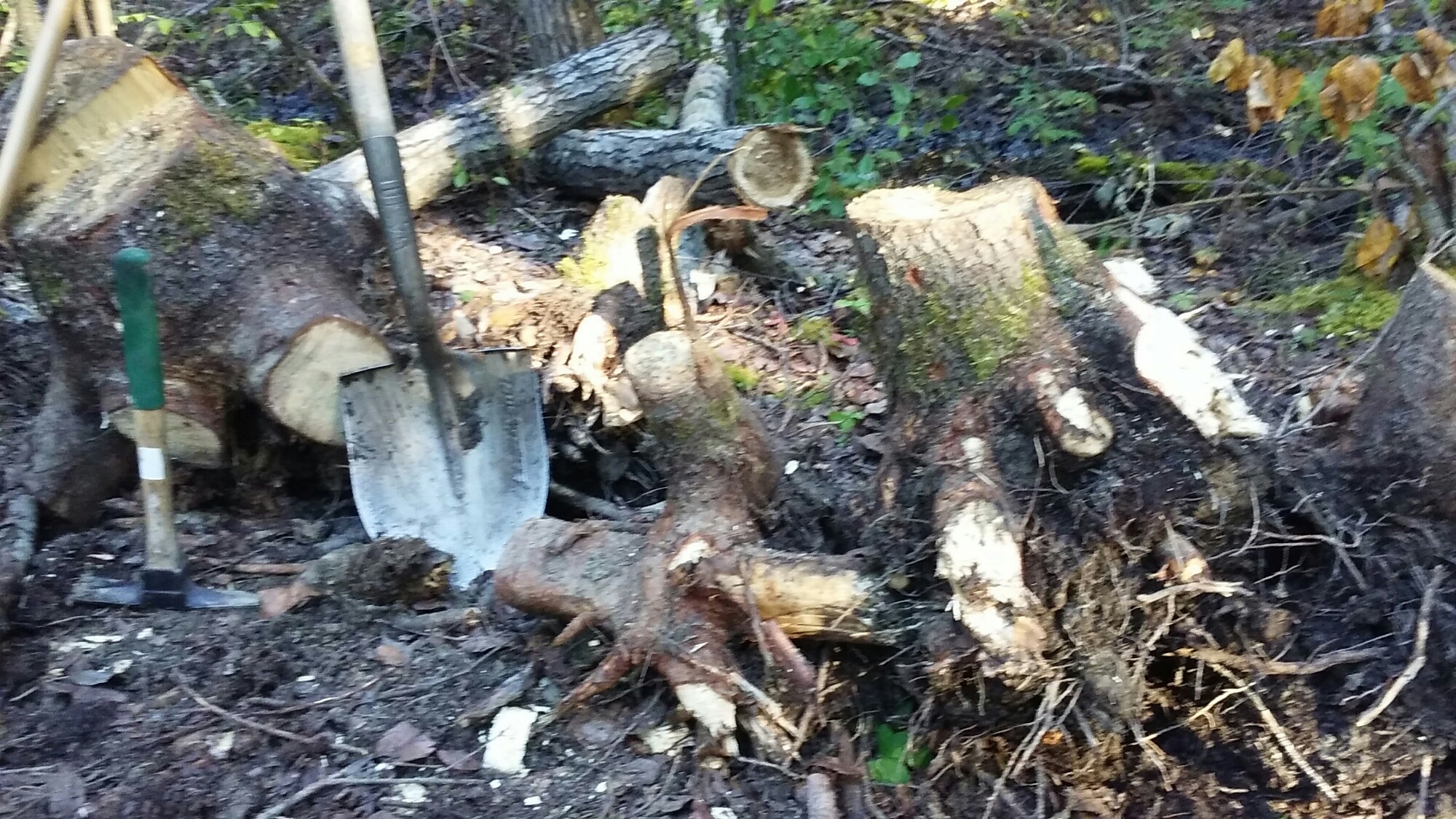 I’m getting my exercise carrying plywood, digging, and doing all the other tasts associated with buidling structues.

I do not need a ‘diabetes care team’…