Since I began this diabetic carnivore experiment on February 10, 2017,  I have not eaten plant flesh for 75 days as of today. That means I’ve only eaten foods derived from animals, mainly meats (beef, pork, poultry and seafood) and cheese.

When I began, the plan was to do the experiment for 30 days, here is the intro post, “Diabetic Carnivore“. Because I’ve thoroughly enjoyed the experiment, I’ve decided to continue experimenting.

I have only eaten animal products and have not eaten the ‘flesh of plants’. I have had plant derived drinks… coffee and occasionally wine.

Since diagnosis, I’ve done a lot of personal experiments and testing. Low-fat, high-fat, low-carb, high-carb… and all points in between. After all of the experiments, this is the meal plan I follow, “A Meal Plan You Can Live With“.

I have been wanting to go ‘full carnivore’ for some time.  Circumstances lined up with my desires … and I decided to go for it. As for the why?

As a diabetic, my goal is to obtain and maintain truly normal blood sugars. Here’s a post where I lay out my blood sugar targets (60-90 mg/dl or 3.4-5.0 mmol/l)  and the reasons for them, “Blood Sugar Targets and Why“.

As this experiment unfolded, I decided to expand it and divide it into at least 3 phases, I discuss each below.

Food List:  Mostly beef, next would be eggs, then pork, poultry, and seafood (including oysters). I try to eat organ meats (liver) every couple of weeks.

Note:  If you haven’t read the “intro post“, please do.  I don’t believe we require plant consumption to survive nor thrive! After 75 days, I still believe that.

I was eating everything I wanted to eat, not worrying about protein or fat grams at all.  I would often stuff myself when I ate, though I generally stuck to my typical two meal-a-day eating schedule.  This initial phase lasted two months.

I did not maintain a food journal during this phase, but for a week I jotted down the meat that I ate.  I added the meat to a food journal, the results are below and compared with my historical nutritional averages.

My fasting blood sugars were sub 100 mg/dl, but higher than I wanted, more about that later. After two months, I decided to ‘moderate’ my meat consumption… a little.  After two months of ‘free feeding’, it was more difficult than I thought it would be.

Instead of literally gorging most of the time… I went to eating until sated. 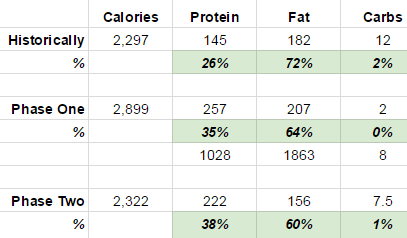 Wrapping Up the Meat

In this section, we’ll see what affect the changes had with my blood sugars, weight, etc.

If you know me, or read this blog — you know that maintaining truly normal blood sugars are most important for me. My fasting blood sugar goals are 60-90 mg/dl, here again is the link to see why.

During the 60 days of ‘free feeding’ in Phase One my blood sugars started out good but began to creep higher. Back in 2013, I tested my fasting blood sugar for 30 days, you can see the post here. My average was 81 with only one reading above 90 mg/dl … that’s the way I like it.

Phase One fasting blood sugars averaged 88.2, with many readings in the 90’s.

Phase Two — the average was 86.0.  It’s getting better but I still want to see it improve back into the lower 80’s. Phase three will ‘attack’ that issue.

I didn’t undertake this experiment to lose weight, in fact just the opposite. I want to gain weight… muscle. :)  I do want to lean out, so I’m ok with a little weight loss as long as my strength and conditioning improves, and it has.

When I started the experiment I was in the 166 range plus or minus a pound.  In the 60 days of Phase One I actually LOST a lb, despite eating close to an estimated 3,000 calories per day.

In Phase Two, I also lost a pound. I’ve been consistently weighing 164 plus or minus a pound.

Due to life and my schedule I didn’t make it to the gym as much during the later portion of Phase One, yet I still hit the gym with vigor, I didn’t lose strength or energy levels.  Same for Phase Two – all systems are go. :)

I’m often asked about this.  Bowel movements have been just fine. Yes, for me the frequency has lessened but that’s to be expected given the lack of fiber I’m eating. Less garbage in, less garbage out. :)

Historically, since diabetes diagnosis I’ve eaten very little fiber, so going ‘full carnivore’ was not a drastic change for me. I remember being asked about bowel movements when I first went ‘low carb paleo’…  people are so ‘programmed’ to believe we need fiber, as was I.

We DO NOT need plants to survive nor thrive!

I no longer desire the flesh of plants!

Thanks to TDS for supplying me with blood sugar supplies! By the way, I am not compensated (other than free supplies) .  They in no way influence my decisions or posting other than a ‘thank you’, occasionally.