I have a very short fuse when it comes to people promoting a high carb diet to diabetics like the American Diabetes Association and the American Association of Diabetes Educators.  They disgust me and this post will show you why they are on my diabetes wall of shame.

People who promote the ADA’s high carb meal plan and who profit from such promotion are deemed to be “ADA Minion”.  Here’s a post about ADA Minion for more information.

Enter the “Diabetic Pasty Chef”. She’s an ADA Minion on a much smaller scale than the ADA, AADE, Joslin’s etc. but her example helps me make a point.

The point is… the ADA and their grain based, high carb diets promote and allow people like this to push HARMFUL damning products on diabetics.

The ADA and their minion gives people like this ‘cover’ to pimp their grains and sugary products to diabetics.

It disgusts me, because I know the harm to real people …it’s causing.

ADA Minion on a Grander Scale

Typical ADA Minion are those in the medical industry such as Certified Diabetes Educators (CDEs) and medical entities such as Joslin Diabetes Center, I could go on and on. You can click here for all ‘Diabetes Wall of Shame‘ posts.

Today’s post is worthy of the Wall of Shame in my opinion because it is a person PUSHING high carb foods as being part of a healthy diabetic diet.  EVEN worse in my opinion, this person is a diabetic and mentions that several times… which is intended to add to her credibility with her “audience”.

Back to the Diabetic Chef

She calles herself the “Diabetic Pastry Chef”…. yes, you read that correctly… a “diabetic pastry chef”.

Pastries have no place in a truly diabetic friendly diet menu.

If you are knowledgeable in all things “paleo” you know it is possible to bake cakes, cookies that are gluten free and lower in carbohydrates, unfortunately, this “chef” is not promoting “pastries” like that…..

She does not disclose recipes for many of her creations… gotta buy the book.  But I have found enough evidence of her ADA Minion Status.

Not only is she a member of the American Diabetes Association…

NOT ONLY has she been “featured” in an ADA publication…

But she also works with a member of BIG PHARMA … and she’s pushing so called, “diabetic friendly recipes” …yeah, right. :(

This picture (above) was taken from her website… I think this speaks volumes….

I think the above picture says much about her “diabetic recipes”,  just use less sugar … makes it diabetic friendly??? NOT!

This quote (above) came directly from her “cook book”.  Reading the above… you could read this almost word for word form the ADA  website. A  similar statement was produced by Joslin Diabetes Center… another ADA Minion. They hold “the line” pretty well I must say.

Above is a recipe from her book…

13  grams of SUGAR per muffin

Lastly, I want to compare her low sugar, low carb “diabetic friendly”  muffin recipe to other muffins…  BELOW is a nutritional table of a HOSTESS TWINKIE!! 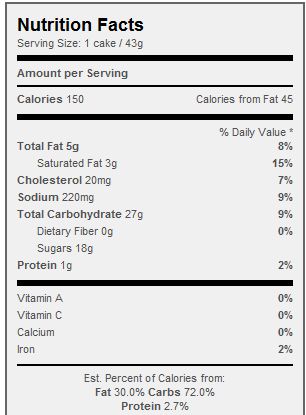 Is there truly THAT MUCH difference???

IS IT ENOUGH Difference to be CALLED DIABETIC FRIENDLY????

Not in my opinion… and why the so called “Diabetic Pastry Chef” is an ADA MINION … and she should be ashamed.

One thought on “New Wall of Shame Inductee Diabetic Chef”