My lowER FAT primal experiment (Round 1) has been over for two weeks now. I’m running behind on my postings.  Before I start… I want to say this… this experiment was NOT low fat… it is lowER fat. :)
If I have learned ONE THING in my two years of “going primal”, it is…

… our bodies are a extremely complex machine…. infinitely more complex than I ever imagined.

Most people who know will admit …

Sadly, those who claim to know… actually know very little. 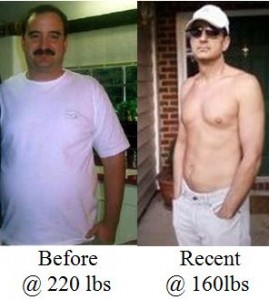 To do that, I needed to add lean muscle so I set out on that path.

For the next 20 months my main goal (other than maintaining normal blood sugar) was adding strength while still performing essentially bodyweight exercises and intense cardio. I do have a kettle bell and a couple of dumb bells but for the most part…it’s all body weight exercises. (I have a pull up bar).
Throughout those 20 months, every time I checked my nutrient content, I was always in the range of 65% of calories from FAT, 30% from protein and 3% from carbohydrates….with  1-2% in Alcohol.

Yes I did periodically maintain a food journal … but I was really only reporting what I ate. I was not trying to eat X amount of fats, protein … the exception to this was my personal experiments.  HOWEVER… I always kept a count of my carbs and kept them low.

I continued to improve my strength and my cardio-vascular capabilities as well… MOST IMPORTANTLY …  my blood sugar remained in normal ranges … for NON-DIABETICS.

However, I never got close to a 6 pack…  add to that my LOVE of experimenting and I decided to go VERY HIGH FAT.

In addition to going high Fat (77% of calories from fat), I performed Intense Cardio almost EVERY SINGLE DAY.  Over the 26 days of the VERY HIGH FAT experiment… I lost 5-6 lbs but by the end of the experiment I was right back to where I started… 173 lbs.  You can read about my summary for the Very High Fat Experiment here.

Last year I attempted a lowER Fat Experiment … but I could not stick to it.  I was addicted to FAT! :)

Fat has virtually NO affect on blood sugar, unlike carbohydrates so I can live with a saturated fat addiction. :))

After my High Fat experiment I was chatting with Mike Peritore and he suggested re-trying the lowER fat experiment… a GREAT IDEA! :)

For the next 30 days … my nutritional goals are below in YELLOW.

As you can see… nutritionally I came pretty close… but exceeded the FAT % slightly and didn’t quite meet my goal for Carbohydrate %.

It is REALLY TOUGH for me to eat lowER FAT. 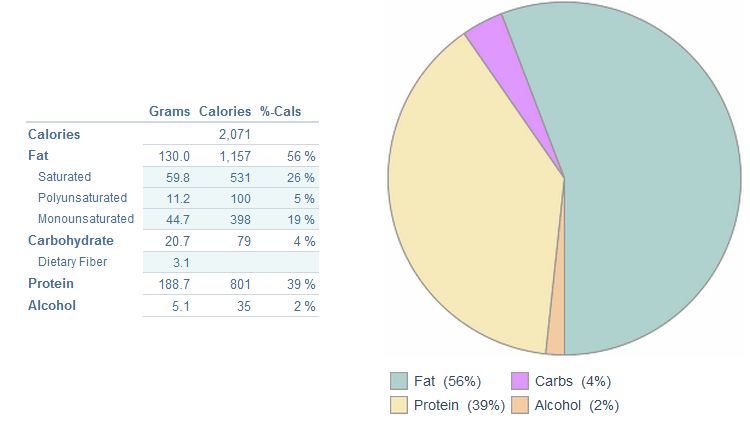 I know where my problem is …. I know WHY I did not reach my nutritional goal …  HEAVY WHIPPING CREAM!!!!

Every day I drink 5-8oz of Heavy Whipping Cream in my coffee, which equals  approximately 500-800 calories just from WHIPPING CREAM … per day. This represents roughly 1/3 of my fat calories and about 1/4 (or more) of total calories.   I knew this before even starting but I thought I could eat enough lowER fat foods to compensate…. obviously I was wrong.  I did eat more lowER fat foods but not enough to compensate for the Heavy Whipping Cream.

Then I began to cave in to my fat desires… lol. The last couple of weeks I began to add bacon and fattier meats to my meal plan and the percentages began to creep up.

6 pack:  I really was leaning out my lowest weight was 166, 7 lbs down came the last week of the experiment.

7 minute mile: life has gotten in the way of this goal,  my training has been ‘on hold’ due to several factors including the weather.   I have trained in 90+ degree heat … numerous times, however I am not going to continue while the temperatures are in the mid to upper 90’s.  I do foolish things… but even I have my limits. :)

I am going to re-try my lowER fat test. My next round of lowER fat will begin in a couple of days.   I am REALLY TICKED off at myself for not reaching my sub 55% goal of calories from fat.   To make this easier on myself (or more difficult) I am going to also STOP using the Heavy Whipping Cream …  that will be tough to do… I love it so. :))

I really can’t say that lowER  fat did or didn’t work… cause I really didn’t go lowER fat.

I am setting my nutritional goal a little lower this time… sub 50% of calories from  fat. It really should be easy if I give up on the Heavy Whipping Cream.

As I’ve noted before, throughout the past two years I’ve done a lot of experimenting… the only constant has been LOW CARBOHYDRATES, NO GRAINS, NO MILK and NO Vegetable Oils!!!

It should be clear … at least for me… maintaining normal blood sugars is MUCH easier if you eat low carb and gluten free. :)