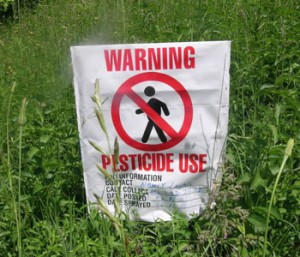 Well today I read  … they discovered… PESITCIDES! are linked to Diabetes!  You can read the article, click here.  By the way, Diabetes Care is published by the American Diabetes Association …. I’m concerned already about the truthfulness of this study.

However...  it is amazing the steps researchers will ‘walk’ all around the block trying to discover “THE CAUSE” of diabetes when it’s staring them in the face.  … it’s HIGH CARB DIETS including grains and sugar… especially High Fructose Corn Syrup.

Don’t believe me? … cut out all those things and watch your Type 2 Diabetes symptoms greatly reduce or vanish! … it’s not a ‘healing’, it’s not a cure.  If a person begins to eat those highER carb foods again… the symptoms do return.

CONCLUSIONS:  This study confirms the association between type 2 diabetes and adult-only exposure to organochlorine pesticides in a general urban population.

… hmmmm diabetes and obesity are growing at alarming rates and this crack team of researchers are blaming it on … pesticides, but only in adults and only in the ‘general urban population’.

Obviously this doesn’t explain the epidemic of diabetes and obesity throughout the WORLD in rural children….

In my mind, this is just another attempt to throw up a smoke screen on the real culprits in the obesity/diabetes epidemic… sadly those culprits are the main contributors to the American Diabetes Association (ADA) and the American Association of Diabetes Educators (AADE)…and thereby have bought and paid for ‘cover’.

Of course the ADA and AADE gladly comply … for they benefit in increased ‘business’… it’s a Win/Win for them.

As I have stated many times… ‘we’ are the real losers…. ‘we’ pay for this in increased taxes and insurance premiums… for both public and private insurances …. AND we pay for it with cell and organ damage…and ultimately death.

6 thoughts on “Pesticides… linked to Diabetes???”