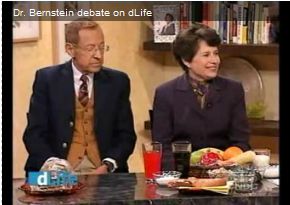 In this post I am doing something that I wanted to do for a long time. I am going to post detailed notes on the video debate between Dr. Bernstein and ADA Minion, “High Carb” Hope Worshaw.

I have wanted to do this for a long time but honestly I put it off because I can’t ‘stomach’ watching the video… “High Carb Hope’s” willful ignorance, intellectual laziness and out right deceit … turns my stomach.

Last year at the American Association of Diabetes Educators (AADE) annual convention there was NO mention of Low Carb in any discussion, meeting, speech… nada.  This was shocking to me because  the AADE is the national organization for Certified Diabetes Educators …. how can they NOT talk about Low Carb??? This year they are actually going to discuss the topic but … they chose High Carb Hope to give the presentation… This is SUCH A JOKE.

I am breaking down her comments on this video so YOU will see what a JOKE it is to have her talk about carbohydrates.  It’s a joke to have her talk to a kindergarten class much less the AADE … imagine her poor clients… paying for this harmful advice. :(

Next… What is an ADA Minion? In this post “You Might be an ADA Minion”  I answered that question and gave some examples of the idiotic things they tell diabetics….. pretty funny if it wasn’t so sad.

In short, an ADA Minion is:

“… someone who supports the American Diabetes Association (ADA)’s “carb up and shoot up” diabetes treatment plan, especially if they profit from such support.”


..and believe me … they all do profit from it.

1. Research shows that low carb diets don’t work. People can’t stay on them long term and they are not a healthy way of eating.

a) The only research she can be talking about is bought and paid for by Big Pharma. NO Credible research shows this… NONE.

b) I know people who have been on a low carb paleo style meal plan for decades… including the gentleman in the video.  They are both sustainable and healthy long term. The audacity for her to make this claim is HARMING and KILLING PEOPLE every day.

c) Additionally I know many people who have eaten a low carb meal plan for YEARS and who are EXCELLING in LIVING!!!

e)  I have heard this so many times. It’s used to justify a high carb meal plan that only benefits large pharmaceutical companies and ADA Minion like High Carb Hope.

2. People with diabetes deserve to eat healthy and enjoy food.

a) People with diabetes deserve to not only survive… BUT TO THRIVE!  This excuse disgusts me because it’s used to justify a high carb meal plan ALL THE TIME.

This is IMMORAL, UNETHICAL and should be ILLEGAL.

b) A low carb meal plan IS HEALTHY … I know this from my own experience PLUS there is research showing NO long term health issues.   Every week I achieve a new fitness ‘record’ … almost daily I write a fairly literate post attempting to educate, motivate and entertain…. in other words, no obvious brain damage.

STOP THE LIES ADA and AADE like “High Carb Hope”!!!

c) Once the carb addiction is broken … YOU TOO can enjoy foods like I do. I have eaten this way for 18 months… I LOVE my FOOD and I LOVE MY FREEDOM!!!

Freedom from drugs, insulin and lies from Certified Diabetes Educators

3. The carb issue today is not a quantity issues it is a quality of carbohydrate issue.

a) More lies … this excuse is used daily to convince people that it’s ok to eat whole grains… it’s not. Grains are high in carbs and have toxins … and should be avoided by ALL but especially diabetics.

I also have normal blood sugar with -0- drugs and -0- insulin.  Perhaps you should listen to a woman that profits from your continued adherence to a high carb meal plan.

OF COURSE THEY ARE …  because they follow the high carb meal plan of the ADA!!!!

What we know about diabetes management today is that good blood sugar control keeps people healthy.

Here’s a free LESSON. Excess carbohydrates cause blood sugar increase. This requires diabetics to take drugs, insulin or both.

So YOUR meal plan requires an increase in drugs and insulin …. and makes it TOUGHER to control blood sugar.

PEOPLE this is NOT rocket science!!   ADA and Diabetes educators want you to think it is …. so you will continue paying them for harmful advice.

I feel people need a realistic way of eating.

This may be the dumbest thing she’s said yet… so a meal plan that requires increasing amounts of drugs and insulin is … REALISTIC????

For WHOM????    I know it benefits her and other ADA Minion … but taking more and more drugs is NOT realistic to me.

Regarding the grains… for fiber… I eat less than 10g of fiber … for 18 months. We do not need fiber….another Lie.

Regarding vegetable oils…REALLY???? Veggie oils???    YOU are a joke…. sadly your pitiful advice kills people.

Here is the video if you would like to see it… I do not recommend it if you have a weak stomach.