With all the positive news  coming out daily about the advantages of a ‘low-carb paleo’ approach to diabetes treatments and to health in general ..  I thought the future was bright for real reform in diabetes care.

Then I heard the news … a confirmed high carb, grain, low fat, vegetable oil promoter is President-Elect of the American Ass. of Diabetes Educator’s Board.

The ‘election’ of “High Carb” Hope Warshaw means one thing … the nutritional battle will be a long term fight. Victory is off in the distance; the end is not in sight.  We will prevail, but until then millions will suffer every day while a relative few profit.

The President Elect of the Diabetes Dis-Educators

I first heard and posted about “High Carb” Hope Warshaw  back in April 2011 with this post.  “ADA Minion Interview“. Her condescending, pompous attitude combined with a high carb, grain based ‘dietary dogma’ … irritated me.

But when she said, “Diabetics have a right to eat like everyone else’, this is such pathetic, harmful advice… my feelings for her went from irritation to anger. .

I have posted about her several more times, please read these posts to get a feel for who she is, why I loathe her and all that she stands for.  In many ways she is the epitome for all that is wrong with nutrition and diabetes care.

Also these posts. “Diabetes Dogma”  and “I tried to Ignore this Pathetic Advice“.

Hope Warshaw would not ‘bat an eye’. 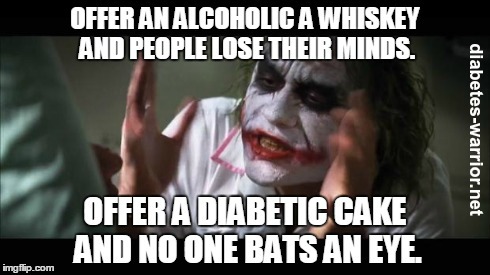 There is only one reason Hope Warshaw would be elected as “Queen Bee” of Diabetes Dis-Educators. …. Greed.  The American Association of Diabetes Educators (AADE) is funded by Big Food, Big Pharma and the Medical Industry,   That’s a fact.  That’s also true of the American Diabetes Association (ADA).  If this is news to you, read this post. $31 million reasons.

Her election is further proof that the Big Three (Big Food, Big Pharma and the Medical Industry) will not go willingly to the ‘low carb paleo’ way of eating.

The AADE nor the ADA really care about diabetics.  If they did, they would not push a high carb, grain based, blood sugar spiking ‘diet’ on those that need it the least … diabetics.

The AADE and the ADA do care about pleasing their corporate donors… big food, big pharma and the medical industry.

There are literally BILLIONS of dollars in food, drug, and medical service sales at stake.

Big Food, Big Pharma and the Medical Industry will not do the right thing … willingly.  They will continue to taint and corrupt nutritional ‘science’ to support this failed high carb, grain based, low fat dogma.

The election of High Carb Hope Warshaw is proof that this will be a long war… battles are yet to be won.

Ultimately we will prevail … meanwhile millions suffer every day while a relative few profit.