This is a rant against the American Diabetes Association’s high-carb foods it promotes … with a twist. I found a Pillsbury recipe that is very similar. I wonder which recipe was MORE diabetic friendly, Pillsbury or the ADA? 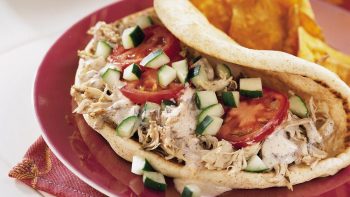 Above is the picture from Pillsbury’s recipe page. 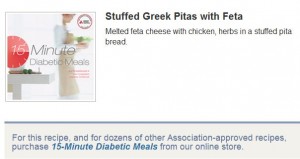 When I saw the original high-carb ADA recipe, I wondered if a Big Food company’s recipe would be higher in carbs? The first Big Food company that came to mind was Pillsbury… the Pillsbury Doughboy company.

If a company is going to be higher than the ADA … it would be Pillsbury, you would think, right?

Next I Googled “pillsbury chicken pita” and found this recipe, “Greek Pita Chicken Folds“. To add a little suspense and hopefully a little intrigue …

The American Diabetes Association’s mission statement says something about ‘stopping diabetes’ and helping diabetics. Pillsbury? They just want to sell highly addictive foods so you’ll come back and buy more… for profit of course.

Which one do YOU think is more diabetic friendly???? 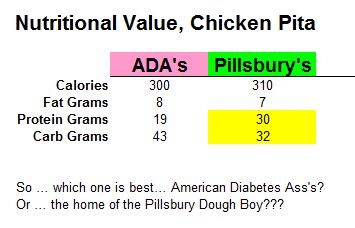 It doesn’t take a genius to figure this out.  It’s pretty simple if you are a regular reader of this blog, but for those new to ‘low carb paleo‘ or ‘low carb high fat’, let’s take a look.

Calories: Close enough not to matter and largely irrelevant. I do not count calories…. I count carb grams.

Fat Grams: Again, close enough not to matter, and largely irrelevant. I do not count fat grams, I count carbohydrates.

I do not ‘count’ protein, I do keep an eye on the general amount. I want to make sure in general terms I eat enough but not too much. Here’s a formula I use.

Carbohydrates: … the clear winner was Pillsbury Dough boy’s recipe.  It had a 11g difference. That may not sound like much… but 11 grams is my daily total many days!

The American Diabetes Association, the ‘protector of all diabetics’, promoted a high carb pita recipe that exceeded the carb total of Pillbury’s by @ 33%.

Can you believe it????    A processed grain pusher has a lower carb recipe …. than the organization sworn to protect diabetics and prevent diabetes!!!

Keep listening to the American Diabetes Association and their ADA Minion… you’ll continue to need more and more drugs and insulin. All while never attaining truly normal blood sugar. .

Good luck with that…

Running From Their Past

Below is the original ‘tweet’ by the ADA. Since this post was originally published the ADA has since removed the link in the tweet.  The ADA is attempting to run from it’s harmful past.

I like to think I (and others in the low carb paleo universe) had something to do with that.