I saw this TWEET below and it was SCREAMING AT ME for a post … and it REALLY irritated the hell out of me.  It’s the American Diabetes Association  promoting it’s online rag’s summer recipe section… 36 grams of CARBS per serving. Oh… and a serving = 1 cup.   ugh.

The link in the tweet lead to the recipe below … before we ‘get to that’… just understand a couple of things real quick.

1) FACT! The Body requires the consumption of -0- carbohydrates, here’s a link showing, “Why Low Carb Works“.  I am not against carbohydrate consumption … as long as you can maintain normal blood sugar.

But… what do I know??  I’m just a formerly obese diabetic who was taking drugs and  insulin shots daily. Now I am drug and insulin free…. here’s a list of ailments I ‘had’ and here’s a list of drugs I ‘took’.

Keep in mind, the serving of food in the recipe listed… is MORE carbs in one little CUP than I normally eat ALL DAY!!!!

2) FACT! Excessive carbohydrate consumption increases blood glucose.  I consume less than 30g most days … usually less than 20g of carbs…. PER DAY!   (the recipe below is 36g per CUP!)

3) FACT! Increases in blood sugar require diabetics to take  drugs and / or insulin to move the carbohydrates from the blood stream and stored in cells as fat. Failure to do so causes damage to cells and organs. Doing so… increases fat storage.

Just to recap, we do not need to eat carbohydrates but if we eat an excessive amounts it requires diabetics to take drugs and / or insulin to ‘move’ the blood sugar out of the blood stream.

The logic is simple… if you ‘push’ a high carb meal plan (like the ADA) you are causing an increase in drug usage.  You are also causing other health problems….

That why I say… the ADA and Certified Diabetes Educators (most anyway) are nothing more than glorified drug pushers.  Drug sales go up and the ADA and CDEs benefit with contributions from Big Pharma   Here’s a post on 19 million reasons the ADA pushed a high carb, drug inducing meal plan.

Now for the Recipe… the proof.

Next… is the nutritional panel,  note the total fat… 2.5 grams. Combine low fat with high carbs, this meal is guaranteed to make you hungry soon… craving more. Which of course will require MORE drugs and insulin …. :( 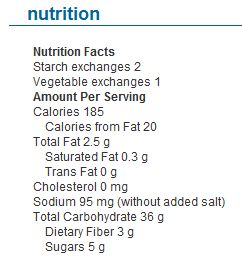 This meal, even with a single serving will cause a blood glucose spike and WILL result in requiring drugs and insulin to ‘know it down’.

PLEASE say no to the “ADA Way” …  here are others who have done so … and they are so glad they did. :)   Paleo Success Stories!