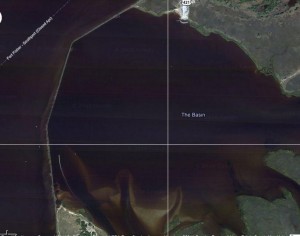 On the left, “The Basin” is outlined by the jetty.

I am doing neither with this post’s title. We were NOT  in danger of dying … but we easily could have been injured on the algae covered, coral encrusted, jagged rocks.

I violated a primal law this day and it could have become a very costly mistake… in both monetary and non-monetary costs.

It has a full day’s worth of sights including earthworks, museum and Aquarium but we decided to bypass all that and go straight to the end of the park… to the jetty.

In the center of this picture (above) is the phrase “The Basin”, to the left is the “jetty”, it looks like it is in 3 segments and connects the main part of the island to a small sand bar.  We decided to walk the entire length approximately a mile, to the sand bar.

When we started out, the jetty looks like a raised up mound with a paved sidewalk on top.  It would be an easy walk to the sand bar… and should provide us with some interesting photo opportunities. 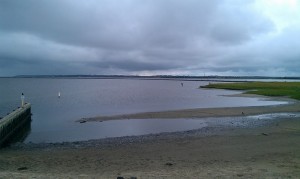 You can see the jetty just above the water line, off in the distance, in this picture (above).

All was well as we started out… I was a little concerned because even when we started, the jetty seemed to be raised up above the water line less the closer to the sand bar we walked.   Still … we headed out.

I thought, ‘we can always turn back if it gets too bad’ … right? 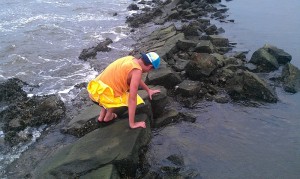 Pretty soon in our journey we noticed a couple of things … this should have caused us concern at the time.  Looking at the picture above you can see that…

2) the water level on the sound side was a good 3-4 feet above the water on the ocean side.

3) the picture above shows why this trip was so tiresome.  We literally had to crawl and walk carefully over algae covered, jagged rocks.  One false step meant a fall onto the rocks…. and this usually meant pain soon followed.

Still we pressed on…. in error. 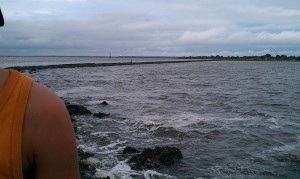 The picture above, is looking back to see the distance we had traveled… and at this point we were about 1/2 way to the sand bar. 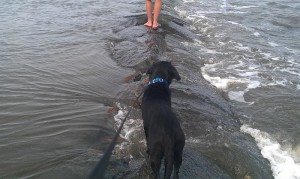 What we did not realize until we were 2/3’s of the way to the sand bar…. the water was rising and quickly.

Traversing the jetty had become very treacherous.  Every few yards one of us would slip … and ‘feel the pain’ of bone against coral covered rocks.

Additionally, even the jetty itself was becoming submerged … as you can see above.   This created areas where the water was pouring over the jetty … making it too dangerous for us to travel further.

We started this journey without considering the rise in the tide and it’s affects on us traveling safely. Truthfully I did think about that but we were well above the water line as we started.

Pride also came into play… we said we were walking to the sand bar …. and we were determined to do so. 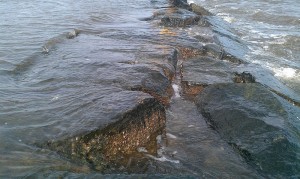 Luckily at this point… we ‘woke up’ to the fact that our ‘quest’ of reaching the sand bar was not going to happen.

We finally used our brains and decided to turn back.

The water continued to rise and became more and more dangerous.  Brad lost a flip flop, which meant he would be walking over coral covered rocks barefoot.  I was VERY WORRIED AT THIS POINT.

I was SO PROUD of Ollie.  I told Brad that Ollie arrived to the park a puppy… but walked off the jetty a grown up, canine companion.   He was and still is afraid of rushing water… yet he ‘toughed it out’ and walked over these slippery rocks…even when there was rushing water.  :) 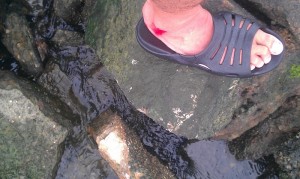 By the time we walked off the jetty both Brad and I had multiple cuts, scratches and bruises.  We were lucky… there were many falls but no broken bones.

My fear was Brad falling and hitting his head or breaking a bone. There was NO way I could have carried him off the jetty. I would have had to leave him on the jetty… not knowing if the water was going to engulf him.

All turned out well… but with a little less luck, it could have had a disastrous ending.

Had we decided to tough it out and walk all the way to the sand bar… there is NO doubt we would have been stranded there over night. There is no way we could have made it back given the rising tide.

We did not kiss the ground once we got back to ‘land’… but ALL three of us sighed a deep sigh of relief. :)

Eating and exercising ‘primally’ is important… but don’t forget to AVOID STUPID MISTAKES! :)

I often ‘push the envelope’ regarding nutritional and fitness rules while experimenting but what we did was dangerous.  We paid the price with sores, cuts and bruises… but honestly, I’d do it all over again.

One thing is for certain… I would not have attempted this if I was a ‘typical’ person with diabetes.  Each and every cut is a potential disaster with high blood sugars.

What would I do differently next time?  Check the tide charts, start as the tide is going down, wear tennis or water shoes and… don’t bring a dog.

3 thoughts on “My Primal & Dangerous Adventure”