Big Food, Big Pharma and the Medical Industry have been controlling nutritional policy for decades.  Their main methods are by lobbying activity, ‘contributions’ to nutrition related groups like the ADA, AHA, AND, ACS etc.  and by tainting nutritional studies.

If you doubt that Big Pharma controls nutritional policy through ‘contributions’ … read these two posts, “the ADA 31 million reasons. ” and “the largest dietitians group“.

Here is a quote from the article above.

“The groups have spent more than $175 million lobbying since President Barack Obama took office in 2009 — more than double the $83 million spent in the previous three years, during the Bush Administration.“

There is no science in nutritional science

Exhibit A:  Pizza is deemed to be a vegetable… that result can ONLY happen when an overzealous government takes it’s orders from Big Corporations that put profits ahead of health.

Sadly there is no ‘science’ in nutritional science.  One only needs to look at the obesity and disease epidemics to see that… but here’s Exhibit B:  Here is the original ASN  (American Society for Nutrition)  document.

“A new scientific statement from the American Society for Nutrition (ASN) maintains that processed foods make up an essential part of the American diet — …”“… authors reported relationships with companies such as Nestle, ConAgra, Hershey, OceanSpray, and the Dairy Research Institute, and ASN’s supporters have included companies like McDonald’s, Monsanto, Mars, Kraft, and Kellogg.”

How in the HELL is that a ‘scientific statement’ … it was a statement but there was no science in it.

The fact that the ASN would publish such drivel .. saying that processed foods are essential??? … shows they have their heads so far up Big Food’s butt… they are obviously oxygen deprived.

I have first hand experience as my site was investigated and I was told that I could not provide eating recommendations to diabetics by the NC Board of Dietetics and Nutrition. Read about it here.   I contacted the Institute for Justice and sued the state of NC for freedom of speech infringement, the case is still being litigated. :)

I was chatting with a friend of mine Jen Willett  when she stated,

“ I look at McDonald’s fries now and I know that……….they’re not *really* fries.  Sadly they contain harmful ingredients and perhaps even more than what we know those to be… breaks my heart. The “food” we see in front of us?   It is just “food-like products”….all sick, sick lies. I am sad.” 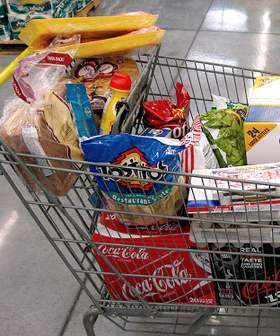 Jen’s comment reminded me of what I had seen in the grocery store last night. I admit it… I’m a ‘cart watcher’. I look at the cart content of  other people’s carts.

A morbidly obese lady in an electronic cart was in front of me.  The picture to the left is not her cart… but it was eerily similar.

The contents were this, Pepsi, bread, potato chips, cheese doodles, bologna and hot dogs.  Nothing in that cart was healthy and I would not recommend eating any of it.  The lady had to know that none of those items were healthy… she also had to know that given her health condition those items are some of the worst for her.

She had given up and given in. I know because I was like that 5 years ago before a diabetes diagnosis.

I had given up and given in… resigning myself to declining health.  Luckily for me a diabetes diagnosis was an awakening ‘slap in the face’.  I found a better way.

Yet the Academy of Nutrition and Dietetics (AND) formerly known as the American Dietetic Ass. takes the most money from the Big Food companies below.

We must put an end to the influence peddling of Big Food (and Big Pharma) … we must.

We must put ‘science’ back into ‘nutritional science’.

We must have freedom of speech, we must #OcccupyNutrition

The people must have the ability to freely disagree with the powerful corporate interests.

Our health and in my opinion our future on this planet demands it.

Thanks to Jen Willett for the inspiration and motivation to write this post. :)