I have proven over and over again, if you have elevated blood sugars… try a true fat fast! This post provides details leading up to and including my most recent experiment, a butter-only fast! 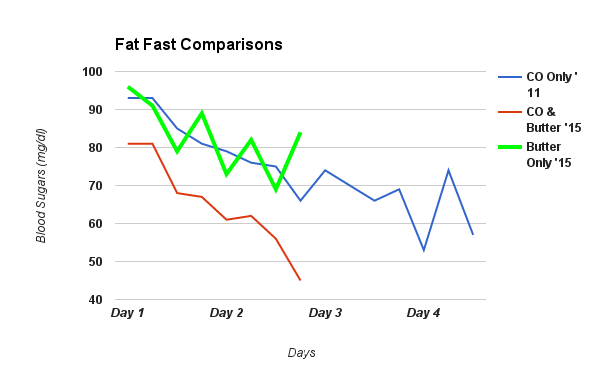 My many personal experiments confirmed that a coconut oil fat fast worked amazingly well at reducing my blood sugars.  It’s also worked great for everyone who employs the strategy in their protocols of weight and blood sugar reduction.

As noted above, in my previous coconut oil fast, I had to end it early due to VERY low blood sugar levels.

I received this comment to the experiment from someone I have long admired, Petrol Dobromylskyj the author of Hyperlipid.

“why do you use coconut oil in your fat fast? … you are asking for hypoglycaemia [low blood sugar]. I appreciate butter is far from pure palmitic acid but it will be significantly richer in long chain saturates such as palmitate and stearate than the mix of butter and coconut”

I am leaving out a lot of Petro’s comment, I’ll include it all in a later post.

The main thing I wanted you to know is… due to the chemical make up of coconut oil, in Peter’s opinion coconut oil would naturally and eventually lead to low blood sugars or hypoglycemia.  If you have elevated blood sugars, that’s a great thing and would explain my body’s inability to stabilize blood sugars above 60 mg/dl.

Does this mean that coconut oil is a better fat compared to butter for reducing elevated blood sugars?

That’s what my current experiment is out to determine.

There are many things that can raise blood sugars including carbohydrates, stress, injuries, infections, illnesses, drug interactions, dehydration, and for me excessive protein.

The day before beginning the butter fast I ate 14 ounces of chuck steaks for lunch.  Facing what I hoped to be an extended butter only fast, I decided to eat 1.3 pounds of denver steaks at 10 pm … for a late dinner.  That’s a total of over two pounds of meat … which is excessive for me. ;)

Eating that much protein and eating over a pound right before bed, I expected a higher than normal blood sugar and I was not surprised with a 97 mg/dl the morning of the fast.  I mention this because below you will see that my blood sugar began this experiment higher than the other experiments. That should give me a little cushion from the start.

Below is a chart of my blood sugars through the first two days.  As the legend on the right shows, the longer blue line is the “Coconut Oil Only” fast from 2011.  The short red line is this year’s “Coconut oil and Butter” fast and lastly the bright green line is the current experiment.   I discuss in the notes below the picture.

The butter only fast (green line)  is definitely performing better than the butter and coconut oil fast (red line).

Will this trend continue?

How much of the results of the first two days are due to the overeating of protein just before the experiment?   Time will tell.

Let me thank TotalDiabetesSupply.com. I could not test as much as I do if it were not for them providing me with free testing supplies. By the way, I am not compensated (other than free supplies) .  They in no way influence my decisions or posting other than a ‘thank you’, occasionally. :)