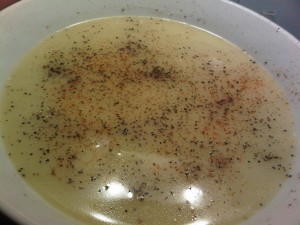 This is my mom’s chicken stew recipe … kind of.

By simply substituting Coconut Flour (for Wheat Flour) and Heavy Cream (for milk) … I was able to turn a long time FAMILY favorite into a tasty primal dish.

I have fond memories of Fall Chicken Stews ….. we would cook chickens in large pots, next to the water on a lake… we would have 15 – 20 people come and eat the Chicken stew over cream potatoes, slaw and black eyes peas.  There are primal substitutes for the cream potatoes (cauliflower) and for the slaw (made with Extra Virgin Olive Oil)… so I definitely plan on recreating this meal in the future.

This recipe today only pertains to the Chicken Stew.

I had not  had Chicken Stew since my diabetes diagnosis. Therefore, when I successfully made Coconut Flour Gravy a few weeks ago … one of the first things on my list to do was to try Chicken Stew using it.

Note: This recipe really is easy … the ONLY step that required real ‘attention’ was whisking the ‘rue’ or gravy.

1) Cook Chicken in a Grok Pot (crock pot).  In the picture below you can see that the water level was not covering the chicken.  I prefer it this way, if for no other reason than it looks good.   It also makes the skin taste better and I LOVE eating the skin. :)

YOU can cook on low ‘all day’ or ‘all night’ if that works with your schedule. I typically cook the chicken on high for about 4 hours. 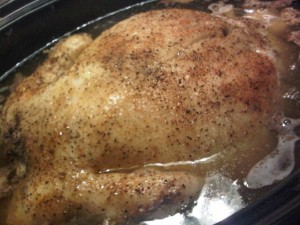 2) Remove the chicken… and allow to cool. I also remove the kneck, liver, heart and gizzards. I love adding those chopped up in the stew… but my wife does not like them so I eat them separately.

I usually use a set of tongs to begin pulling apart the chicken to quicken the cooling process.  Since my wife does NOT like dark meat … I also use this as an opportunity to eat the wings, thighs and back meat. :) 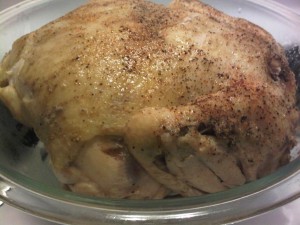 3) Use a strainer with a handle to remove tiny bits of fat… I’d leave it for me… but… the wife doesn’t like it.  I wanted to count the amount of ‘broth’ so I poured off all the broth into a bowl.

If you don’t have a hand held strainer you can place a strainer over a bowl to separate the small bits of fat.

There were approximately 6 cups of broth, the picture below was before the straining. 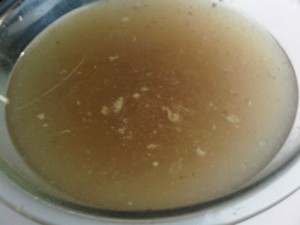 4) Gravy or Rue can be made several ways, coconut flour makes it easier than ‘normal’ flour, in my opinion.  Coconut flour does not clump together as easily and even if it does, it’s easily separated by whisking.

For this recipe I separated 2  cups of broth into two separate bowls.  Then separately I heated the broth, adding 1/2 stick of butter to each and added 4 TBS of Coconut Flour while whisking for about 10 minutes.

Play with this… if you want your Chicken Stew thicker, add more Coconut Flour and cook/whisk longer.

Here is a link to a full post on Coconut Flour Gravy, the pic  below is from that post. 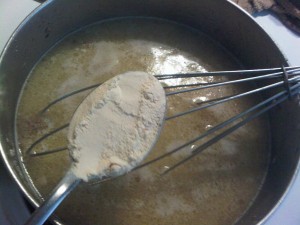 5) Adding the Gravy, Cream & Meat – after the gravy has thickened add it and chicken back to the crock pot.

I used two chicken breasts … but I’d strongly recommend using the dark meat as well… so good! By the way it’s against the rules to cut the chicken up for this… YOU MUST tear the meat apart… according to my mom. :)

Just so YOU know, if I was making this for me… I’d cut up the skin in bite sized bits and add back to the broth as well.

It’s also a good time to add in the heavy cream. I used ONLY a cup of cream.

It’s ready to eat as soon as the temperature of the stew’s temperature rises… I began eating immediately…. patience is not a virtue of mine, especially when I’m the cook. :)

Below is a picture of the stew as I ‘scoop’ it out using a coffee cup. 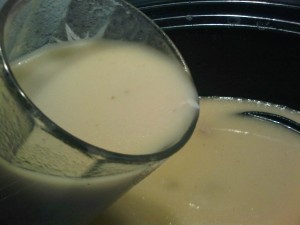 6 cups of broth – in total I had about 8 cups after I was done. I rinse out pots with water and add that to the crock pot, I hate to waste any of the flavorful ingredients. :)

Note: Here’s a picture of two of my favorite ladies … it’s about time I added their picture.  By the way, my grandmother  … she’s the  lady in this post. “Two Type 2’s” 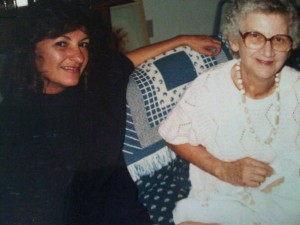 My mother and grandmother...