My good friend Joy Young tweeted that phrase the other day… and it immediately hit me in a profound way.

Joy and I have been friends for over two years…  it seems as if it was a decade ago!  I was investigating primal living… but I was not yet fully primal.  We both met while going through our first session of P90X.  We cheered each other on if not daily at least several times a week.   It’s funny, … we’ve never actually met but I do count Joy as a true friend.

We have definitely educated, motivated and entertained each other over the last several years.  THANKS JOY!

We have talked on the phone numerous times but as time passes our communications are less frequent as we have both matured in our ‘primal journeys’.   She’s good people….  I felt compelled to say that… now back to the topic of the post. :) 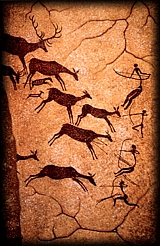 “Primal Girl in a Paleo World”

When I heard this phrase it really ‘hit home’.  To break it down in it’s simplest forms, at least as I interpret it…

a) “Primal Girl”    … she adheres (as do I ) to a lifestyle as explained in “The Primal Blueprint”, a book written by Marks Sisson.

To summarize the book in one paragraph, it is about living as we were designed to live.

Resting – Sleep is critical but more than that we need to rest our bodies as well.

What does this ‘paleo world’ mean?  We obviously live in Neolithic or modern times.

To me, it means we are still governed by paleolithic principles.

The Paleolithic era ended approximately 10.000 years ago, that is when ‘humans’ began the agricultural age. “We” settled down onto small farms, in small villages and began growing crops.   Prior to this man was primarily a ‘hunter gatherer’.   There are still a few Hunter Gatherer cultures left today, one is the “Hazda Tribe”

Human genetics have changed very little since paleolithic times. This means that for the most part … those things that harmed us then, harm us today.

This ‘intolerance’ can manifest itself in many ways depending on genetic dispositions. For some, it manifests as Celeacs disease or Crohns. For others it’s diabetes, arthritis and asthma … the list goes on and on.  As more and more of ‘us’ eat more and more processed foods with neolithic agents such as high fructose corn syrup (HFCS), Genetically Modified Corn, Wheat and Soy products… the worse and worse the Neolithic Disease epidemics become.

You may not be trying to live as you were designed …  but you should be. Regardless, we all are subject to the natural laws that govern us based on our genetic make up… of that, there is no doubt.

We all live in a paleo world.