I’ve ‘taken on’ many in the medical industry, including doctors, nutritionists and diabetes educators. Karen Johnson a diabetes educator and the subject of this post, was one of the first “ADA Minion” I had words with.  She had the audacity to call me ‘unkind’, among other things.

Why would she say mean, hateful things about me?  Because I speak the truth. I make bold, accurate statements like the one in the meme below. 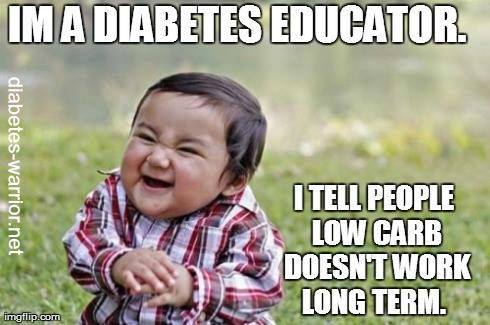 If the truth hurts… so be it. Millions suffer every damn day, while a relative few profit. The Medical Industry, Big Pharma and Big Food companies all profit.  Everyone profits… except those with disease.

An ADA Minion, who happens to be a “Certified Diabetes Educator”, took issue with statements similar to those I made above.

I received a post to my Facebook page from Karen Johnson (see the picture below), I will answer her comments individually.

Hmmm, on a daily basis I help diabetics lower carbohydrate consumption. As blood sugar levels drop into normal ranges, I suggest they reduce drugs and insulin.

I’m helping diabetics reduce their costs and improve their health.  What could be MORE helpful and “kind” than giving a diabetic better health?

THE ADA (and their Minion) support a diabetes diet that CAUSES the vast majority of it’s adherents to require  more drugs and insulin!

Big Pharma rewards the ADA with millions each year in ‘contributions’, $31 million in 2012.

How’s that working out for the 30 million diabetics???  Not too good.

The audacity, the self-righteous and pompous attitude… the nerve.

I am off all drugs and insulin while I THRIVE!  And I give out much of my advice absolutely FREE!  You can purchase my ebook for the price of a Big Mac Happy Meal, “How to Reduce Blood Sugars“.

THE ADA and their Minion can’t stand it. They want you on their diet and on their “payment plan” so they can profit from you pain and suffering. That is an option and it’s an option millions of diabetics take every day.

LOW CARB PALEO is Based on Science

Real science, not the science bought and paid for by Big Food, Big Pharma and the Medical Industry.

Do you want real proof?   I wrote a post, “Low Carb Paleo Proof” with much more information but here are a few studies from the post that show the science of low carb.

Low Carb as the first approach to treating diabetes. This is a “MUST READ”.

This next group of articles is from Stephan Guyenet, these articles are powerful!

Diabetics on a LC Diet Part 1

Diabetics on a LC Diet Part 2

SO …if you want to follow the ADA diet, stay on meds and insulin… and PAY FOR the “help”… go see Fit4D.

I Want to be Hated

I tried kindness. I went on ADA friendly diabetes sites and tried to share the truth in a positive and friendly manner.

I was mocked, blocked and ridiculed.

NICE does NOT get the attention of DIABETICS when MINIONS are telling them:

“eat sugar and bread … it’s what your doctor wants…here…eat some more rice….have some pasta… See you next week for your next appointment…. Don’t forget your checkbook! ”

Karen Johnson and I exchanged a few replies, then I request this…

STILL WAITING FOR A RESPONSE!

I am so glad I did not listen to pathetically ignorant and mis-guided medical industry ‘professionals’, who told me low carb paleo was harmful….

Your blood sugar goals should be to stay below 90 mg/dl (3.3 – 5.0 mmol/l) fasting and below 120 mg/dl throughout the day (or lower). If you disagree with these targets, please read this post, ‘My Targets and Why“. Bad things happen as blood sugars approach and exceed 100 mg/dl (5.5 mmol/l) consistently.

Follow my diabetes diet for thirty days and your blood sugars will decline and most likely you will need to reduce your blood sugar medications including insulin if you use it.

Imagine that? Lower blood sugars and reducing medications! What a new concept!

I have been following the real food diabetes diet, for almost seven years… and I THRIVE with diabetes.

7 thoughts on “Unhelpful, Unkind and Twisted!”