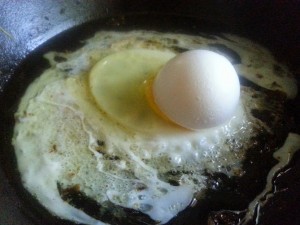 Please listen to me… pretty please with bacon on top.  :)  This post has a lighthearted subject, but it has a deeper significance.

Pre-Diabetes  I followed the path laid out for me by our failed low-fat, high carb, grain based nutritional guidance… I lost weight, gained more back… all the while staying on a path of declining health,  requiring more and more drugs.

All that changed with a diabetes diagnosis… I jumped off the train to poorer health and when I did my mind reawakened and … I began to  examine many areas of my life… including how I cook.

Successfully self-treating diabetes involves lifestyle changes… including how you eat, play and LIVE!  But make no mistake… changing what you eat is of primary importance.

I urge you ALL to open your minds to new foods and new ways of cooking … this post is about my latest example of that and at the end I posted links to previous examples of creativeness in the kitchen. :)

My mind is always ‘on’ it seems.  I am always thinking of better or simpler ways to eat, play and live.  This includes cooking. :)

Because I cook with ample amounts of fat, I hate how my eggs will slide to the edge of my cast iron skillet thanks to my burners not being level. When the eggs, especially the yolks rest against the side of the skillet, the eggs can stick increasing the need for cleaning.  So …

The other day while frying eggs  I thought…

And even if the eggs do start sliding, you can place a spatula on top of the egg-shell to hold it in place. :)

Below is an example of one ‘pot’ cooking.  I cooked the pork loin before adding my eggs. 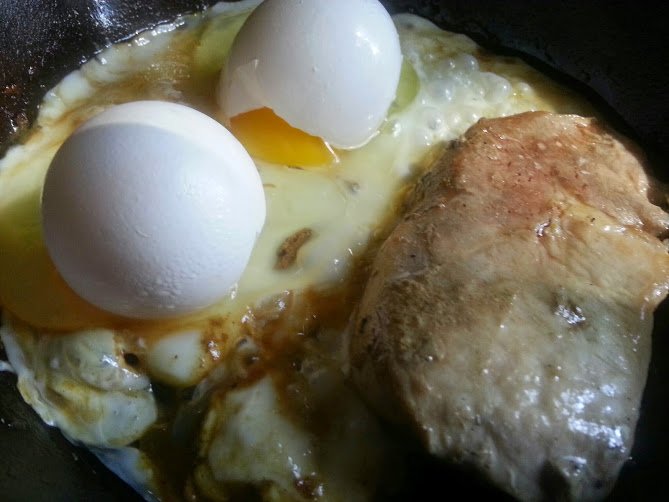 Another view of the skillet (below) with the egg hats removed.  LOL … I love writing ‘egg hats’.  I’ll explain later. :P 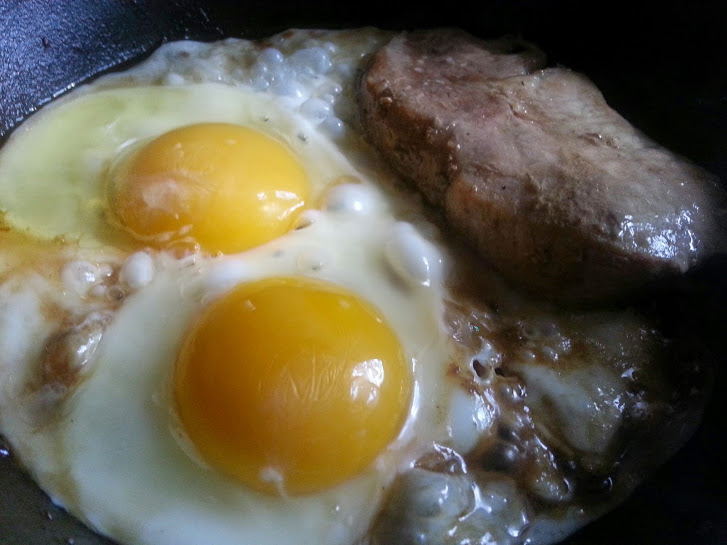 Below is the finished meal with beef liver and the wild plantain leaves added. 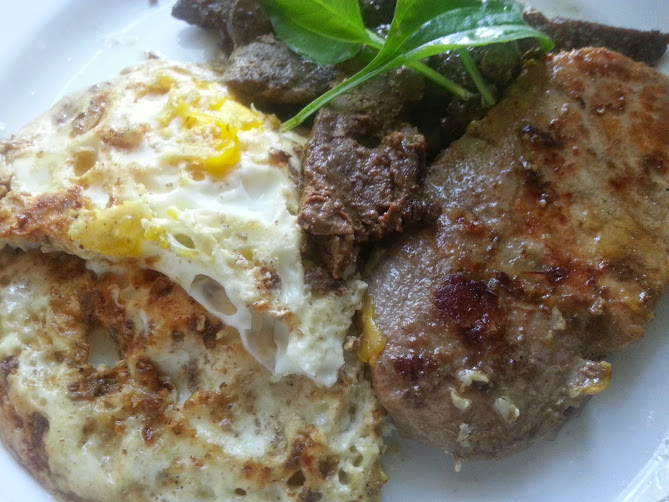 Note:  Beef liver does raise my blood sugar.  I do suggest that diabetics try eating beef, chicken and pork livers due to their increased nutritional values.  However, like ANY new food… you should test, test test.  A couple of ounces per day would go a long way to improving the nutritional values of your meals.

To many, following a low carb primal meal plan is very limiting (at least initially) … Therefore being creative in the kitchen and having a willingness to explore other foods and other food preparation techniques is important.

I cringe when I hear diabetics  (or anyone) say ‘I can not eat ____’.  Vast majority of the time they are lying to themselves, because they really mean “I will not eat ____”.

Humans eat a very diverse range of foods across the globe.

It has been awhile but I have written numerous posts on how important expanding your food is to your long-term success.

I would urge you to HAVE PHUN in the kitchen!   Explore different ways to cook, prepare and present foods… as long as they are ‘low carb primal’. :)

Here are some of my examples….

This was my first ‘foodie’ recipe involving bacon, avocado and pecans. . I need to revisit this one. :)

PS – Before I leave I need to explain why I love to write the phrase, “Egg Hats” …   Barbara Anello and I were discussing Joslin … and she correctly and astutely called them… ass hats.   A few hours later I thought of a title for this post. :)